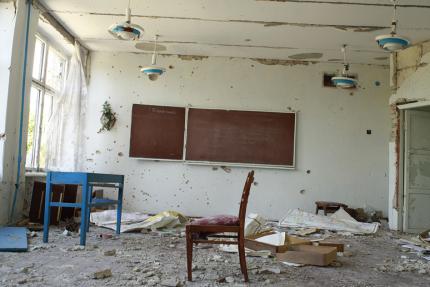 Schools, pupils and teachers are being attacked in many conflict situations around the world today. One hundred countries have now endorsed the Safe Schools Declaration on protecting children and education in situations of armed conflict. ‘Norway has played a leading role in this work, and we are pleased to see so many countries taking practical action to follow up the declaration,’ said Minister of Foreign Affairs Ine Eriksen Søreide.

Ensuring access to education for children and young people in countries affected by conflict is a priority area for Norway. In 2015, representatives of 37 countries met in Oslo to present an international political statement on strengthening protection of education. This included a commitment to use a specific set of guidelines on protecting schools and universities from military use during armed conflict. On 20 November 2019, it was confirmed that the 100th country, Ukraine, has endorsed the Safe Schools Declaration.

‘A great deal of work remains to be done, but we can already see that the declaration has resulted in practical measures that are making a difference. UN peacekeeping forces comply with the declaration, and a number of countries, including Afghanistan, Mali, Yemen and Nigeria, are implementing measures to ensure that schools are not used for military purposes. This has resulted in a dramatic reduction in the number of incidents of this kind,’ said Ms Eriksen Søreide.

Ms Eriksen Søreide commended civil society organisations – not least Save the Children, which has played a leading role – for their work over many years to highlight this issue. When children are denied an education or schools are attacked in conflict situations, this has serious consequences for the children concerned and their local communities. These civil society organisations identified the use of schools for military purposes as a problem, and drew up guidelines and measures for states and other parties to conflicts. Together with Argentina, Norway led a consultation process with other states, to promote the guidelines and to mobilise support for a broader political declaration on the protection of children and education. The result was the Safe Schools Declaration of 2015.

Since then, Norway has worked with other countries, and with Save the Children, the Special Representative of the UN Secretary-General for Children and Armed Conflict, UN organisations, the Red Cross movement and other civil society organisations to encourage states to endorse the declaration and, even more importantly, to translate it into practical action and closer compliance with international humanitarian law.

The Safe Schools Declaration has now become an important instrument for the protection of civilians, and it is used by humanitarian organisations, the UN, and in dialogue between states. An overview of the countries that have endorsed the declaration is available here: http://bit.ly/2QCV99R