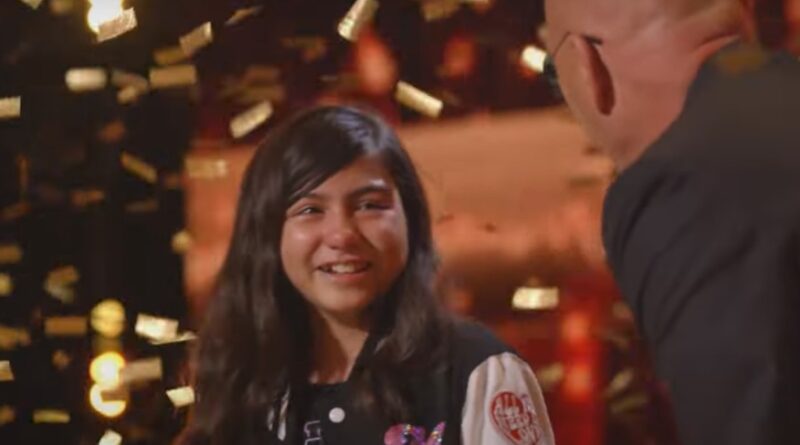 On the spot, with no backing music, and with tears streaming down her face, the young singer found her zone and hit “Amazing Grace”.

An 11-year-old Yorba Linda, CA. native, Baez was plucked out of the audience and handed a spot on America’s Got Talent.

The youngster has dreamed about this moment since she was four, her dad explained at the top. “Someday, somehow you’ll be on the show,” he would tell her.

“I’m the biggest fan there can be of America’s Got Talent,” she said with tears in her eyes in a prerecorded bit that aired Tuesday night (June 7). “And here I am.”

The moment arrived when, before the show, the mic was passed around the audience. When it reached her, Maddie confidently belted out “Amazing Grace.”

And here we are.

On Simon Cowell’s suggestion, Maddie auditioned. On the spot, with no backing music, and with tears streaming down her face, the young singer found her zone and hit “Amazing Grace” with more acrobatics than a Cirque du Soleil show.

The judges made the right call.

Those emotions, we later discovered, can’t simply be attributed to an AGT dream come true. Maddie’s dad Chris has been battling cancer for the past nine years, an illness that has reached stage-four. She honed her vocal talents by singing to him in hospital.

When asked how she might spend the $1 million prize, she explained, “I would help him with that.”

Before the four judges could vote, Howie Mandel changed the course of her young life by slamming the Golden Buzzer. Cue golden confetti, more tears and hugs all around as Maddie cruises into the live rounds.