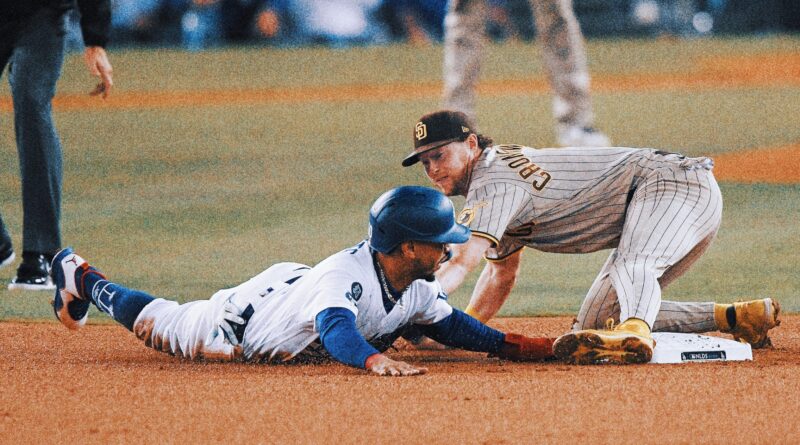 LOS ANGELES — Not even the rally goose could shift the Dodgers’ luck Wednesday.

They will head to San Diego with the National League Division Series tied at a game apiece, left to lament their failures to capitalize on chances and finish off plays in a 5-3 Game 2 loss to the Padres, whose relievers have yet to surrender a run in 9⅓ innings this series.

It’s not for a lack of opportunities.

Twice, the Dodgers’ tying run stood 90 feet away with fewer than two outs and a chance to tie or take the lead in the late innings Wednesday. Twice, that player never left third base.

Manny Machado talks with Tom Verducci about the Padres’ spirited victory against the Dodgers and hitting a home run off Clayton Kershaw.

Will Smith began the sixth inning with a single, and Max Muncy followed with a 357-foot drive to right field. The ball one-hopped the wall, but Muncy only got to first base. Manager Dave Roberts thought a deke from right fielder Juan Soto confused Muncy, who confirmed as much.

“I thought Soto was going to catch it,” Muncy said. “Then when he didn’t catch it, Will was right in front of me, and I wasn’t sure if he was going to go to third or not. By the time I saw him going to third, it was too late for me to make my decision, and I didn’t want to make an out at second right there.”

Runners on the corners rather than two runners in scoring position would prove costly.

The Padres turned to their bullpen, as hard-throwing right-hander Robert Suarez entered for Yu Darvish. Suarez struck out Justin Turner before getting Gavin Lux to ground into an inning-ending double-play.

“We had chances,” Lux said. “But that’s baseball.”

An inning later, the Dodgers’ miscues extended to their defense.

Both Darvish and Dodgers starter Clayton Kershaw allowed three runs in five innings. The Dodgers called on Brusdar Graterol for the sixth inning, which began with a Brandon Drury single. A grounder followed from Jake Cronenworth, but the ball was hit too slowly to turn two. Then came a potential double-play grounder, but the ball was hit softer than shortstop Trea Turner anticipated, and he couldn’t handle the short hop. All runners reached safely.

“I thought he might have been a little too quick,” manager Dave Roberts said. “You’re not going to double the guy up, so just to get the lead runner was really important, and I just think that the exchange wasn’t good.”

A bouncing RBI single to right field followed and put the Padres ahead for good.

The inning could’ve been far more destructive. Trent Grisham tried to bunt in a run, which Graterol prevented by sprinting off the mound and making an athletic, running throw to get Wil Myers at the plate. The inning ended with a sprinting, over-the-shoulder catch from Cody Bellinger in center field.

But the damage was done. After solo shots from Freddie Freeman in the first, Muncy in the second and Turner in the third, the Dodgers didn’t score again.

They loaded the bases in the seventh, but a lineout to center field from Smith left the Dodgers empty-handed. They finished the night 0-for-8 with runners in scoring position, stranding 10 men on base in the loss.

“You just look at the game, and there were a couple of opportunities — two innings back-to-back — that we had an opportunity, situationally, to push a run across to tie the game, let alone to potentially take the lead,” Roberts said. “We couldn’t do that.”

In the eighth inning, another opportunity arose after a brief delay because a goose landed in shallow center field.

Lux followed with a two-out single. The Padres then turned to closer Josh Hader with two outs, and Trayce Thompson worked a walk. Maybe, the feathered friend switched the mojo.

A goose is on the loose at Dodger Stadium!

A goose was on the field in the eighth inning of Game 2 of the NLDS between the Padres and Dodgers.

But again, the Dodgers put two runners on base. And again, it amounted to nothing.

(It was just a normal goose, not one of the rally variety.)

Bellinger had singled the previous inning, but the Dodgers went to the bench to remove the lefty-lefty matchup. Bellinger is 3-for-12 with a home run and five strikeouts in his career against Hader. Chris Taylor, one option to pinch hit, is 3-for-8 with two walks against the hard-throwing lefty. Roberts also said before the series began that Miguel Vargas was on the roster for his “hit tool” and “bat-to-ball” ability, but it wasn’t the rookie grabbing a bat.

Instead, the Dodgers went to backup catcher Austin Barnes, who was 1-for-6 with three strikeouts in his career against Hader. Taylor’s health was a question entering the postseason after he dealt with a neck issue late in the year, but Roberts said that didn’t impact the decision. Taylor, after all, is expected to start Game 3.

In the ninth, yet another chance awaited. The Dodgers put a runner in scoring position for the fourth straight inning, but Freeman remained glued to second base.

The Dodgers’ 11 hits Wednesday amounted to just three runs and a tied series that will continue this weekend at Petco Park.

“We had a lot of opportunities. We just didn’t cash them in today,” Freeman said. “If we just keep creating those opportunities on Friday, and we get those big hits, we’ll be just fine.”

Rowan Kavner covers the Dodgers and NL West for FOX Sports. He previously was the Dodgers’ editor of digital and print publications. Follow him on Twitter at @RowanKavner.