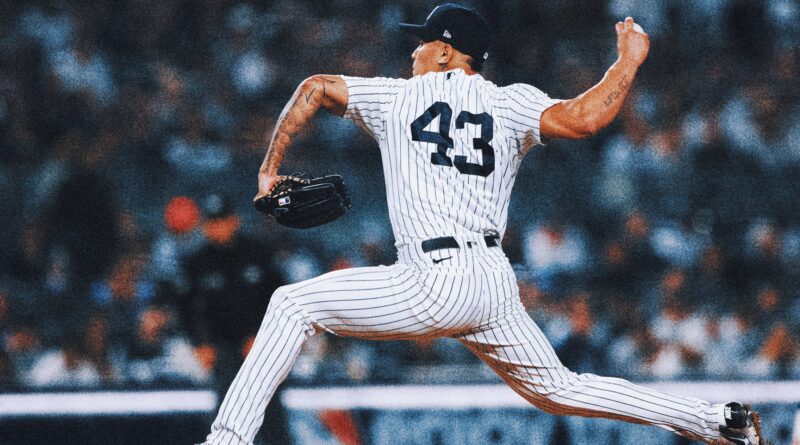 NEW YORK — The Yankees’ bullpen is currently being held together with Band-Aids, bubble gum and duct tape. It is fraying at the edges, weakened and weathered by the grueling gauntlet of a 162-game season.

Their tattered visage is understandable; New York’s relief corps has endured one hell of a season, from the seemingly never-ending barrage of injuries to an infected-tattoo-related Aroldis Chapman workout no-show to Tuesday afternoon’s just-under-the-wire surprise UCL tear for deadline acquisition Scott Effross.

But on Tuesday at Yankee Stadium, that battered and beaten rag-tag group of relievers held firm and survived Game 1 against the Guardians without allowing a run. Thanks to a pair of timely double-plays and a hapless Cleveland offense, the trio of Jonathan Loáisiga, Wandy Peralta and Clay Holmes tossed up zeros in 2⅔ innings of work and guided the Yanks home to a rousing 4-1 win. Each wavered, if just for a moment, but held firm in the end.

Yankee ace Gerrit Cole, a.k.a. the most expensive pitcher in the known universe, earned his big bag of money in his first career postseason start in the Bronx as a Yankee. His total capitulation in last year’s AL Wild-Card game at Fenway Park now seems like a century ago. Cole’s assured demeanor Tuesday evening matched his dominance: 6 2/3 frames, four hits, eight punch-outs, the only blemish a solo homer off the bat of Steven Kwan.

The whole ballyard realized pretty quickly — if they didn’t know already — that Cleveland’s best shot to push runs across would be against New York’s questionable pen. Guardians manager Terry Francona spoke postgame about his hitters working Cole’s pitch count up early to get to the Yankees pen. Early on, it looked like that strategy would pay off, but an eight-pitch fourth allowed Cole to breeze through the middle innings.

Still, after Cleveland’s 9-hole slapper, Myles Straw, reached on a one-out single in the seventh, Yankees skipper Aaron Boone did the necessary thing, yanking Cole from the game after 101 pitches. As the New York skipper strolled to the mound, a haze of worry began to float around the ballyard. Yankees fans knew what was coming, what was about to be asked of the beleaguered bullpen: eight outs before three runs.

The first volunteer tossed into the fire was right-hander Loáisiga, who just a year ago was considered one of the team’s true high-leverage options. Armed with a 100 mph heater, he struck out almost a batter an inning in more than 70 frames in 2021, with an impressive 2.17 ERA to boot. But this year, the 27-year-old struggled with early-season ineffectiveness before he hit the injured list in May due to a shoulder issue.

Since returning in mid-July, Loáisiga had been closer to his old self, but he hadn’t quite recaptured his best form.

And so any worries about Loáisiga and the bullpen as a whole only doubled when Kwan, the first hitter he faced, laced a single over the shortstop’s head to put two on with one out. The 47,807 at Yankee Stadium, who for most of the evening were absolutely raucous, tightened up. Outwardly confident, inwardly still ticked off at Chapman, the crowd got understandably nervous.

But then a 100 mph fastball, up and in on the hands of Guardians shortstop Amed Rosario, changed the story. As the 1-2 pitch zipped toward Rosario’s hands, he offered a meek, uninspiring swing. The man had been jammed. The ball bounded harmlessly toward Isiah Kiner-Falefa at short, who calmly stepped on second and fired to first for a double-play. Inning over. Disaster averted.

After that dose of good fortune, Loáisiga returned for the eighth and promptly allowed a lead-off single to José Ramirez. Again the doubt bubbled as Boone walked the path out to the mound. This time he tapped the opposite arm, bringing in the left-hander Peralta.

Peralta, who hadn’t thrown since Sept. 18 due to back discomfort, was tasked with retiring Cleveland’s most powerful bat, lefty Josh Naylor. Naylor — who alongside Ramirez was one of two Guardians to eclipse 20 home runs this season — tends to struggle against same-sided pitching; his OPS is a full .344 points lower against lefties.

But because Cleveland’s bench isn’t exactly jam-packed with Silver Slugger candidates, Naylor stayed in to face Peralta. Predictably, he rolled an 0-1 slider weakly to first baseman Anthony Rizzo, who stepped on the first-base bag and chucked the pill to second for the tag and double-play. A pitcher’s best friend, coming through yet again.

Like Loáisiga before him, Peralta came back out after the Yankees’ half and retired lefty Andres Gimenez on a harmless ground out. At that point, Francona called upon righty Owen Miller to pinch hit, which drew Boone out of the dugout and Holmes out of the pen.

At one point this season, Holmes was automatic. After longtime ninth-inning man Chapman struggled and hit the IL, Holmes was given the closer role. He took it by the horns with his lead-heavy sinker, earning his first career All-Star nod.

But that consistent excellence meant the Yankees leaned on him hard when their other relievers started falling like dominos. By the end of the year, that fatigue showed. Holmes’ second-half ERA of 4.84 was hilariously higher than his 1.31 mark in the first half. His ineffectiveness led to an IL stint in August and an extended period of rest to close out the season. Before Tuesday, he’d last pitched Sept. 26.

His much-anticipated return started about as poorly as one could imagine, with an immediate plunking of Miller.

But like his predecessors, Holmes settled, getting pinch-hitter Will Benson to ground out to Rizzo before a Straw flyout to center ended the game.

After such a tumultuous season, Tuesday was a pleasantly uneventful show for Boone and his bullpen. Even better, Holmes, Peralta and Loáisiga might typically be limited in a Game 2, but Wednesday’s bizarre off-day gives New York more opportunity to rest its best horses.

They’ll need all the rest they can get because the road only gets rockier from here.