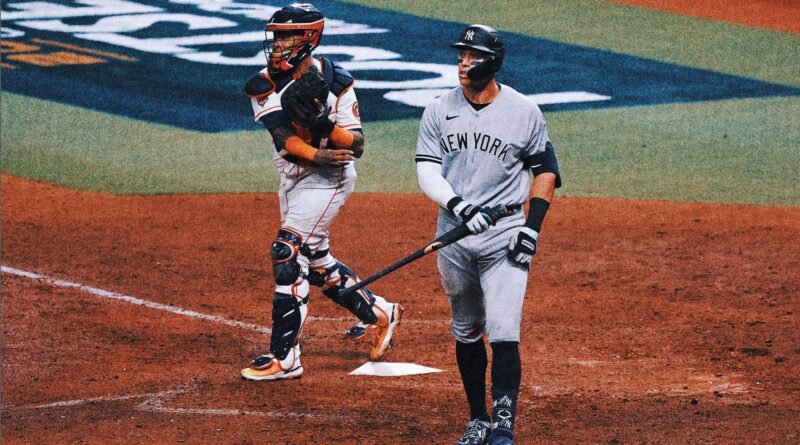 HOUSTON — On Wednesday, the Astros exposed two flaws in this Yankees team: the holes in their lineup and the unreliability of their bullpen.

Credit starter Jameson Taillon for limiting the Astros to one run and keeping them in the park. He pitched better than many expected across 4⅓ innings and 67 pitches. Then the merry men from the Yankees bullpen showed up and, to the enjoyment of Houston’s lineup, threw batting practice.

Clarke Schmidt’s pair of home runs allowed to Yuli Gurriel and Chas McCormick in the sixth inning broke a tied game and gave the Astros some breathing room. In the seventh, shortstop Jeremy Peña piled on with a solo home run off Frankie Montas, who was making his first appearance since Sept. 16. Pena went 3-for-4 in the Astros’ 4-2 win over the Yankees in Game 1 of the ALCS on Wednesday at Minute Maid Park.

“They got a great staff over there, top to bottom,” Aaron Judge said. “They got great arms out of the ‘pen, they’re effective on both sides of the plate, righties and lefties. Good starting pitchers that can mix in three or four pitches. So it’s a tough matchup.”

Yuli Gurriel, Chas McCormick hit home runs to give the Astros a lead

Astros first baseman Yuli Gurriel and center fielder Chas McCormick both homered in the sixth inning to give the Astros a 3-1 lead over the Yankees.

In a flash, those homers gave the Astros a 1-0 lead in this series and erased the work the Yankees had done to stay within striking distance. No play was bigger than Judge’s diving catch in right-center field in the first inning. With one out and runners on first and second, Judge took away an RBI or two from Alex Bregman’s line drive that was going to split the gap before Judge’s extended right arm came into view. He laid out for a big-time play that was the early difference in the game.

But there was always two-time Cy Young winner Justin Verlander looming to disrupt New York’s aspirations. The Yankees blew a key opportunity to tack on against Verlander in the third. Anthony Rizzo drew a one-out walk, then Giancarlo Stanton ripped a double off the right-field wall. With runners on second and third, Josh Donaldson and Matt Carpenter both struck out to end the inning.

The rally-ender put a spotlight on the problems within New York’s lineup. The Yankees struck out 17 times in the series opener. Carpenter gets a pass because Wednesday was his first time in the starting lineup since Aug. 8. It’s expected that he will need several reps before getting back into form, and he was plainly unready to be in the batting mix.

“He’s really good, and obviously I haven’t played in a while, but I’m not going to stand here and make excuses,” Carpenter said of Verlander. “Honestly, the way he was throwing the ball tonight, I could’ve played for the last two months, and it still would’ve been a tough day.”

But Donaldson was completely overmatched by Verlander, with little else to warrant the third baseman batting fifth behind Stanton. Donaldson is 4-for-19 with nine strikeouts so far this postseason. He hasn’t done enough to be batting ahead of the likes of Harrison Bader and Isiah Kiner-Falefa, both of whom collected hits off Verlander on Wednesday.

Verlander settled into a steady rhythm after that third inning. He struck out his next six consecutive batters and retired 11 in a row to end his outing after six innings and 103 pitches.

By the end of the fifth, Rizzo showed his frustration with Verlander’s utter dominance. Verlander struck Rizzo out on four pitches, the final pitch of the at-bat a nasty curveball that got Rizzo to swing and miss. He then aggressively threw his bat and helmet after the inning was over.

“That’s who he is,” a dejected Rizzo said after the loss. “There’s no surprise.”

“He’s in great shape, and he’s not only physically strong, which you can see, but he’s mentally strong,” Astros manager Dusty Baker said of Verlander. “This guy, he has mental toughness. When he’s down and out, and it looks like you got him in trouble, I mean, this guy, he can dial it up.”

The Yankees had the right idea, being patient at the plate and forcing Verlander to throw 45 pitches across his first two innings. It was within those early frames that Bader cranked his fourth home run in six playoff games, continuing his red-hot tear at the plate.

New York’s untiring offensive approach ensured a somewhat early exit from Verlander, but even so, he gave up only three hits and recorded 11 strikeouts across his 33rd career postseason outing.

By the time Rizzo homered in the eighth and snapped the streak of 16 consecutive Yankees batters retired by Houston pitching, it was too little too late. New York trailed by two runs with just four outs to go. The Yankees put two men on base against Rafael Montero, all for Carpenter to strike out on five pitches without ever making contact. Donaldson, Carpenter and Jose Trevino combined to go 0-for-11 with nine strikeouts in Game 1.

The holes in the Yankees lineup are glaring, and they’re running out of time to fix them.

“It’s one game,” Rizzo said. “This is a seven-game series. This was a close game, and they came out on top.”

Deesha Thosar is an MLB writer for FOX Sports. She previously covered the Mets for the New York Daily News. Follow her on Twitter at @DeeshaThosar.