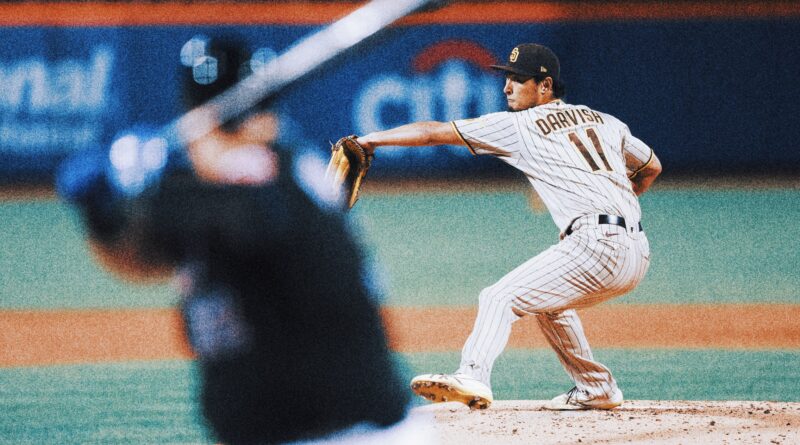 Nothing could possibly wipe that image from our collective memory: the most intimidating pitcher of a generation, a surefire Hall of Famer, slugging off the mound beneath a hailstorm of boos after allowing seven runs in a dumpster fire of a performance. In front of a sold-out Citi Field crowd, with the energy high and the expectations higher, Scherzer crumbled against the Padres in the Mets’ 7-1 loss in Game 1 of the 2022 Wild-Card Series.

But Mad Max’s sad-sack night stung even more in contrast to the masterful pitching performance opposite him. Yu Darvish, one of the sport’s most tantalizingly talented hurlers, showed up and delivered when Scherzer didn’t. Despite lacking his filthiest swing-and-miss stuff, Darvish refused to let the Mets back into the ball game. After a rocky first inning that teetered on the brink, Darvish gave the Mets and their fans no reason for hope.

And now, thanks in large part to Darvish and the first 100-pitch postseason performance of his exemplary career, the Padres are one win away from an NLDS showdown with the Dodgers.

When it comes down to it, the postseason is about dingers. Trying to string hits together against a team’s best handful of pitchers is a tough task. The best strategy, more often than not, is to draw a walk or two and then aim for the horizon. Clubs that can belt it over the fence when the weather gets chilly win more games than they lose. (The 2015 Royals are an exception that proves the rule.)

On Friday, with the exception of Eduardo Escobar’s solo shot, Darvish kept the baseball in the yard. Scherzer did not. That probably has a lot to do with the 7-year-old Mets fan I saw on the concourse punching a cement wall in disgust.

Even though Darvish danced one step ahead of New York’s bats, his performance was more workmanlike than dominant. The four strikeouts were the fewest he has tallied in a start since June 1. Scherzer — early trip to the showers and all — generated only one fewer swing-and-miss in 4⅔ than Darvish did in seven innings.

But being in control is far more important than being nasty. And Darvish never cracked, never gave up that back-breaking base knock. His most crucial pitch of the evening came early, against Pete Alonso in the bottom of the first inning with one out and Mets on the corners.

Alonso’s league-leading 131 RBIs this season broke a Mets franchise record. Whenever ducks have been on the pond this season, Alonso has generally brought them home.

But Darvish went right after the fearsome slugger, challenging him with a first-pitch sinker in the zone. Alonso got his barrel on it and smoked the ball 400 feet down the left-field line but way foul. Moments later, with the count 0-2, Darvish froze Alonso with a picture-perfect cutter at the knees.

The next hitter, Daniel Vogelbach, flew out to right to end the threat. The Citi Field crowd returned butts to seats, never to rise again.

The night was a sparkling highlight in what has been a bizarre big-league journey for Darvish, who made the highly anticipated trans-Pacific leap ahead of the 2012 season. That winter, the Rangers paid a total of $110 million to secure his services, and for the first three seasons, he delivered. He made three All-Star Games in three years, finished second in the Cy Young and led baseball in K/9 from 2012 through ‘14.

But then his elbow ligament said “see ya,” and since then, it has been a whirlwind. Darvish blew out in spring of 2015, got Tommy John, came back a slightly reduced version of himself in ‘16 and got dealt at the 2017 deadline to the Dodgers, with whom he pitched well until the World Series, where he was knocked around by the eventual champion Astros, who were maybe, probably cheating.

After that, Darvish signed with the Cubs in free agency and then was disappointingly mediocre for two seasons before regaining his form during the COVID-shortened season to finish second in the Cy Young, at which point the cost-cutting Cubbies dealt him to San Diego. He was outrageously good pre-All-Star break in 2021, putting himself in the Cy Young discussion with a sub-3.0 ERA, but then, like the Padres, he imploded down the stretch.

The point is Darvish’s career has fluctuated between fits of brilliance and bouts of mediocrity, sometimes even within the same start. Through it all, the stuff has always tantalized, his kitchen sink of offerings the perfect fodder for Pitching Ninja GIFs. But it also seemed at times, particularly during the beginning of his Cubs tenure and the back half of last season, that Darvish was chasing a ghost of himself.

This season has been a different story. Since a disastrous outing against the Giants in his second start of the year, in which he gave up nine runs and collected just five outs on a miserably windy and cold night in San Francisco, Darvish has posted the sixth-lowest ERA in the National League. His final month was particularly good, as he allowed only eight runs across six starts.

That hot stretch to end the year likely elevated Darvish above his peers in a Padres rotation of hired guns and earned him the responsibility of a Game 1 start. On that stage, he shined, earning his first postseason win since the 2017 NLCS. Baseball has changed quite a bit since then, and so has Darvish. He has reinvented himself as a pitcher numerous times over the years, but he claims he finally feels comfortable and secure, thanks to a better pregame routine that includes mediation.

Darvish still has some demons on which to meditate — when asked about his 2017 World Series struggles against Houston, he declined to comment — but he’ll get ample opportunity to conquer the past, should San Diego advance past the Mets.

Now closer to 40 than 30, he might be running out of time to capture a ring, but on Friday, he took a purposeful step toward pushing the Padres further into October than they’ve gone in 25 years.