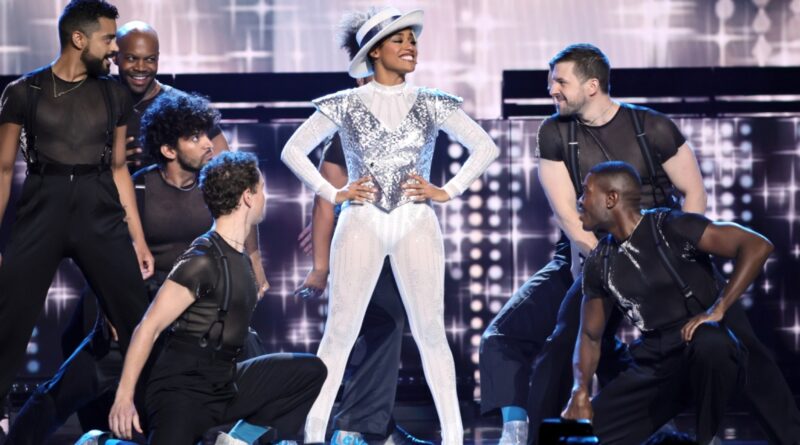 “The phrase ‘The Great White Way’ is becoming more of a nickname as opposed to a how-to guide,” the host quipped.

Oscar winner Ariana DeBose kicked off the 75th Tony Awards with a rousing mashup performance of songs from classic Tony-winning musicals such as Cabaret, Company, The Phantom of the Opera and Hair, while wearing a sequined outfit inspired by Michael Jackson, the subject of the 10-time-nominated musical MJ.

“Let’s just say, for many of you it’s been a roller coaster,” DeBose said of the past two years in her opening monologue, noting that she was presiding over the first large scale, in-person Tony Awards ceremony since the COVID-19 pandemic began. “I am so proud that the theater is becoming more reflective of the community who adores it, and in doing so, has gained new performers, new creatives, new fans. It has shown us stories that have broadened our world and opened our hearts and our minds. And while we have not solved all of our problems, I feel like the phrase ‘Great White Way’ is becoming more of a nickname as opposed to a how-to guide.”

Of the diversity across Broadway stages in the last season, DeBose noted that seven plays were written by Black playwrights. The host called out Lynn Nottage as being a double-nominee for writing both the play Clyde’s and the book for MJ — the first playwright to earn nominations in both categories in a single year. She also gave a shout out to A Strange Loop‘s L. Morgan Lee, the first openly transgender person to be nominated for a Tony, as well as Six composer Toby Marlowe, the first non-binary winner in Tony history.

“My friends, those are steps toward inclusion,” DeBose said.

Now THAT is how you kick off the #TonyAwards! 👏 We give our round of applause right back to @ArianaDeBose. pic.twitter.com/fybuEJ0agQ