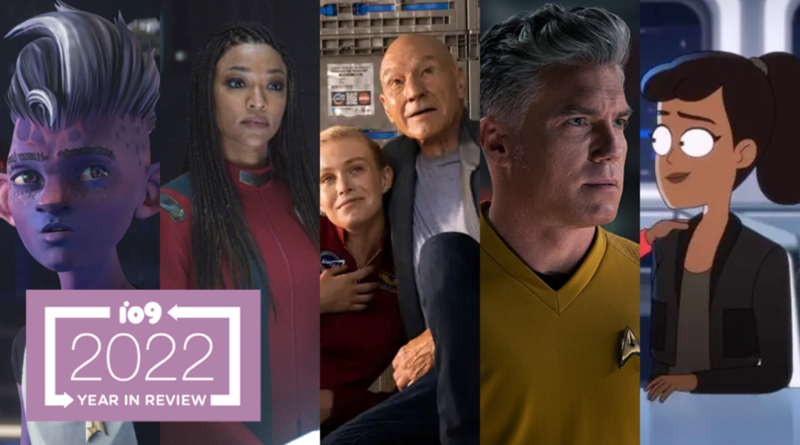 When a world of new Star Trek shows was still a glimmer in the mind’s eye of CBS, the thought of a world where there was “all Star Trek, all the time” after years of the franchise’s dormancy on TV seemed unfathomable. In 2022, however, the idea finally felt actually quite fathomed.

It’s hard to argue a better year for Star Trek in the 21st century than 2022—returning favorites, big news, and bigger gambles on new series that paid off with not just some of the best Star Trek in what’s become a highly saturated market, but some of the best TV of the year full stop. Let’s take a look back at the year that was for Star Trek, where it went—and where it’s going.

Sure, Prodigy debuted at the tail end of 2021, but it brought in 2022 with an end to the first half of its debut season—which is about to wrap up just as the year ends—by revealing that its crew of alien teens, corralled into being Starfleet Acadamy potential by their prototype ship’s holo-Captain Janeway, were being pursued by the actual Admiral Janeway.

It’s always good when a show literally doubles the amount of Kate Mulgrew in itself in a single moment, but the two Janeways—one desperate to find her former Number One, Chakotay, the other equally desperate to safeguard these children and shape them into heroes worthy of Starfleet—gave Mulgrew a ton of excellent work to chew on when Prodigy returned for the back of its first season this fall, reminding us all why Janeway is such a beloved Trek hero.

In January Paramount+ made the unhinged announcement of its schedule for five of its six active Star Trek series in 2022, revealing that from January 6 all the way up to July 7, there would be one new episode of a Star Trek show between Prodigy, Discovery, Picard, and Strange New Worlds every Thursday. Hell, on some there’d be two, with Discovery and Strange New Worlds overlapping with the start and end of Picard’s sophomore season, respectively.

It’s an unprecedented level of saturation Trek’s not seen since Deep Space Nine and Voyager were airing concurrently. We lived through it and I’m still not sure how this happened.

Discovery’s fourth season had a lot to prove after a very strong scenario-shift in season three. And while the results were mixed in season four, its Hail Mary of a finale—resulting in an indulgent, happy-go-lucky solution to the problem of the extra-galactic first contact mission of a lifetime investigating the mysterious Ten-C—was so sweet you could almost forgive that nothing about it made a lick of sense if you thought about it for more than a few minutes. But god bless it for trying.

Speaking of things that don’t make sense the more you think about them, Discovery season four’s finale also went for the absolute bananas move of making diehard Trek fan and Georgia politician Stacey Abrams the President of 31st century Earth. On the one hand: good for Stacey Abrams, massive nerd and wearer of some choice space fashion in her cameo scene. On the other: 31st century Earth was pretty fascist in what we saw of it in Discovery before this, so… yeah, try not to think about it.

The first season of Picard was a massive disappointment, a show that desperately wanted to demonstrate how it didn’t need to lean on the nostalgia of its titular hero’s place within Trek canon until it decided it absolutely needed to, and did so with reckless abandon. It’s hard to say that, by the time it ended, Picard’s sophomore season was particularly good, but it was definitely better than the first through the simple honest of it letting itself be completely bonkers, for better or worse. Time travel? Alt reality that kind of barely matters and everyone’s a bit fash? Wil Wheaton appearing out of nowhere? Q bullshit? That absolutely wonderfully terribly ludicrous season finale? A mess, but at least it was charming about it.

The jewel in Star Trek’s crown this year however, was Strange New Worlds, the new prequel-prequel that took us back to the time of pre-timeskip Discovery and told the tale of Captain Pike’s tenure on the U.S.S. Enterprise. In what might be the strongest debut season of any Trek series, Strange New World’s first season structurally juked where much of contemporary Trek has jived, relying largely on standalone riffs on classic Trek episode formats to deliver a show that both felt nostalgically charming and yet fresh and exciting for the franchise. Not just an excellent bit of Star Trek, but one of the best TV series of the entire year.

Okay but then the episode that is basically Alien but Star Trek with freaky killer Gorn babies and the scariest thing Star Trek has ever done? What a show, folks. What a show.

As if it hadn’t excelled enough in its debut season, Strange New Worlds saved its most brilliant and bold idea for last. Not just the surprise early arrival of Paul Wesley’s Captain James Tiberius Kirk, well ahead of his previously announced season two debut, to be a fascinating, challenging and yet complimentary foil to Anson Mount’s Captain Pike. No, it did so in an episode that was also a fantastic re-interpretation of the greatest episode of Star Trek ever made: “Balance of Terror.”

Going toe-to-toe with Trek’s finest hour to tell an incredibly personal, brilliantly framed moment of growth and acceptance for this take on Captain Pike was a ballsy move, and Strange New Worlds pulled it off with aplomb.

Lower Decks’ third season did not quite grab us as its prior seasons had, but that ultimately means that we got a pretty solid season of animated Star Trek hijinks instead of an incredibly good one, so that’s not that bad. Case in point, it gave us “Hear All, Trust Nothing,” an incredibly well done tribute to Deep Space 9. DS9 is one of the shows that Star Trek has largely shown little nostalgia for in the modern age, with TNG and even Voyager getting love from the contemporary Trek shows before it. But Lower Decks did more than lean on nostalgia with wonderful return roles for the likes of Nana Visitor and Armin Shimmerman, it told a new story in the style of Deep Space Nine, something that felt both like a great Lower Decks tale and a loving tribute to a wonderful show.

After years of batting aside the chance to bring many of them back—outside of Jonathan Frakes and Marina Sirtis’ appearances in season one—Picard softened the bitter pill of announcing its third season as its final one by revealing that almost all of The Next Generation’s primary bridge crew were back for one last adventure. And this was no quick cameo: they’re as much as part of the show as Picard himself is.

Sure, we’ve yet to see the results—Picard season three won’t air until February. It could be an absolute disaster. At least, however, the footage we’ve seen so far seems to suggest that, much like season two, what can feel like a bit of a disaster can still be kind of fun to experience along the way, so we’re chalking this one up as a win so far.

In a year where Star Trek shone piercingly brightly on TV, its cinematic self took a bit of an extended drubbing again, further rocking the series’ already-rocky history on the big screen. Somehow 2022 saw the official confirmation that Matt Shakman’s mystery Trek movie was indeed Star Trek 4, bringing back the rebooted crew of J.J. Abrams’ Kelvin-timeline Enterprise crew for a new adventure set to start filming this year. Then it was just as quickly revealed that Paramount hadn’t actually told those stars about the announcement. And then things went very quiet when no one really had an idea what was going on.

The only time things got louder was when Marvel announced that it had swiped Shakman back into its fold after his spin on WandaVision to helm the new Fantastic Four reboot, leading to the director beaming away from what was left of Trek 4. It’s the last week of 2022 and no, filming has definitely not started. Will it ever? Remains to be seen.

You would think if you could successfully blanket more than half the year in new weekly episodes of Star Trek, you had enough Star Trek going on at the moment. But Paramount doesn’t seem to think so—in between dropping episodes of Trek like they were two-for-one raktajinos on Deep Space Nine’s promenade, the studio announced that a long-previously-announced plan for a Starfleet Academy series was being reworked into a new Paramount+ series this year.

It also confirmed time and time again that Michelle Yeoh’s spinoff Section 31 series is still in the works, just a long way off, after Yeoh exited Discovery during its third season. And then there’s of course renewals, like Discovery season five, Lower Decks season four, Prodigy and Strange New Worlds each getting a season two… if this year was any indicator, we’re going to be doing an awful lot of trekking again in 2023 and beyond.