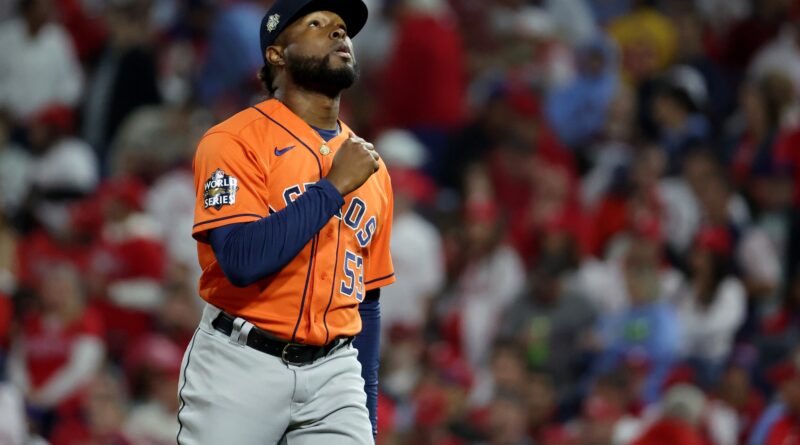 PHILADELPHIA — Cristian Javier is not notably tall. He does not appear to be particularly strong, and he does not throw abnormally hard. He does not throw such an array of pitches that opposing hitters cannot fathom what is coming. He does not command his pitches with such precision that hitters are left stunned by backdoor third strikes.

What he does is deceive batters again and again. Using an unusual three-quarters delivery, he relies on a fastball that spins so much it performs like a far sharper pitch. He sustains the deception because he is especially calm, on the mound and off it.

In Game 4 of the 2022 World Series, Javier so demonstrated his prowess on an international stage that Baseball Hall of Fame officials requested his autograph afterward — a souvenir from just the second no-hitter in World Series history and the first in 66 years.

Javier and three relievers not only etched their spot in history with the combined feat, they keyed Houston’s 5-0 victory over Philadelphia that evened the series at 2-2, with Game 5 coming Thursday (8 p.m. ET on FOX and the FOX Sports App.)

The final out of the combined no-hitter

Four Houston pitchers combined to throw the second no-hitter in World Series history and just the third ever in the MLB postseason.

Javier’s fastball might be a simple-sounding pitch, but it’s some marvel that a man lacking the typical superlatives can throw an elite one.

“I think that’s the best fastball right now in baseball,” said Christian Vázquez, who caught him Wednesday. “You can call it anytime. No matter who is in the batter’s box, you can call it, and it’s going to be success with that pitch.”

Javier is a flyball pitcher. Citizens Bank Park is a bandbox. Javier throws 60% fastballs. The 2022 Phillies can handle heat with the best of them. And yet, Javier flummoxed them over six hitless innings here Wednesday, and three Astros relievers followed with hitless innings of their own. Javier grabbed the last of them, Ryan Pressly, and lifted him off his feet to congratulate him.

Ben Verlander and Alex Curry break down Houston’s combined no-hitter in Game 4 of the World Series. Cristian Javier was dominant in six dazzling innings, and three relievers finished the no-no.

For all of the aforementioned reasons, baseball underestimated Javier for years. Even the Astros have underutilized him in recent seasons. Consider last postseason, when Javier pitched only out of the bullpen. Or consider this postseason.

Javier performed better in September than any of their other starters, but the Astros opted against starting him in the American League Division Series. That forced him to wait three weeks between starts, but he still turned in 5 1/3 scoreless innings at Yankee Stadium during the ALCS. All that got him was another 11-day wait to start again.

Now, unless the Astros use him in relief or to start on short rest, Javier’s season is over. If it is, he set up his team well to win it all, and he almost certainly severed any remaining skepticism about his ability.

Cristian Javier helped the Astros throw the second no-hitter in World Series and just the third all-time in the MLB postseason.

That hesitation had hovered around him for a decade.

In his native Dominican Republic, it took Javier until he was nearly 18 to latch on with a major-league team, two years later than his peers. He signed for less than one one-hundredth ($10,000) of the bonuses those more heralded peers commanded.

But it was Javier, now 25, who commanded the mound in the World Series on Wednesday.

The truth is he has almost always dominated. The worst ERA of Javier’s professional career was last season’s 3.55 mark, logged while serving as a swingman. He has never held the advantage in velocity or movement, but he has always held the edge in his countenance. Little about Javier’s mien Wednesday betrayed that he was pitching in the most important game of his life.

“I mean, the guy was cool as if it was June or July,” Astros manager Dusty Baker said. “That’s how he is.”

For his stoicism, Javier earned the nickname “The Reptile.” Now he wears a necklace bearing the moniker.

Javier had started a combined no-hitter once before: on June 25, about 100 miles northeast of here in The Bronx. He stymied the Yankees when they were the hottest team in baseball.

With this no-hitter, too, he suppressed what was undoubtedly the hotter team still alive. The Phillies had been averaging seven runs per game at Citizens Bank Park throughout their postseason run.

And, this time, his father was in attendance for the first time in Javier’s professional career.

He began by coaxing catchable flies off the bats of Kyle Schwarber and Rhys Hoskins. Then he started to strike out the Phillies: nine of them in all, against only two walks. He ran up some counts, but never lost control of an inning. In the sixth, the Phillies forced him to throw 20 pitches, increasing his total to 97 and spelling the end to his historic evening.

“100 was our max,” said Astros pitching coach Josh Miller, who acknowledged that the calculation of that figure incorporated the possibility Javier might be needed for an inning or two in a potential Game 7.

Miller has coached pitchers in the Houston organization since Javier signed. On Wednesday, he thought back to the days last decade when Javier’s fastball struggled to reach 90 mph, and he still succeeded.

“He lived in the zone like that,” Miller said. “It’s just a unique look for guys.”

“Any team that hits fastballs is still gonna have difficulty with Javi,” Miller said. “We never shy away from him throwing his fastball to anybody, and today showed that it can play against anybody.”

Cristian Javier talks about the no-hitter

Ken Rosenthal talks to Houston pitcher Cristian Javier about how it feels to be part of only the second no-hitter in World Series history.

His 2022 showed that. No one who threw as many innings as Javier limited hits as effectively he did. He struck out nearly 12 men every nine innings. He registered a 2.54 ERA. He earned postseason starts on the sport’s deepest staff.

“That guy’s one of the best pitchers in the big leagues,” said catcher Martín Maldonado. “He took a big step this year.”

On Wednesday, Javier strode one more sizable step to tie the World Series.