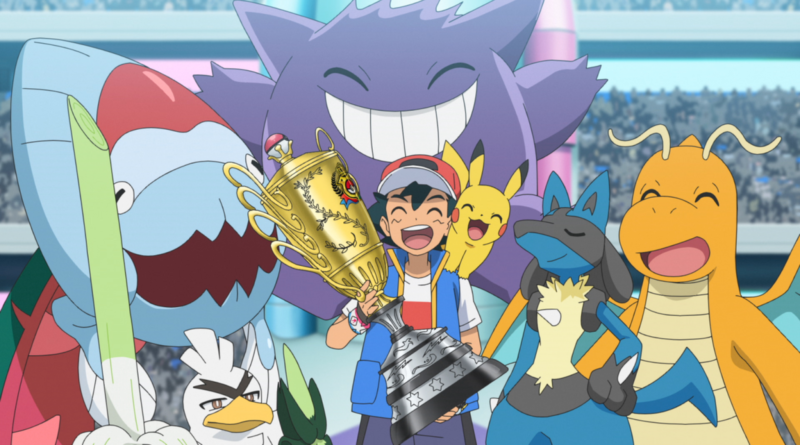 He’s wanted to be the very best for a very long time, but perpetual kid/two-and-a-half-decade-long professional Pokémon battler Ash Ketchum is, at long last, an official Pokémon world champion.

The news, revealed by the Pokémon Company this morning, comes as the conclusion of the latest episode of Pokémon Ultimate Journeys aired in Japan today, “The Finals IV: Partner.” After a tough battle between Ash and Pokémon Sword and Shield’s Leon—known as Satoshi and Dande in Japan, respectively—and an interruption from the legendary Pokémon Eternatus, the young boy from Pallet Town emerged triumphant in the Masters Eight Tournament of the Pokémon World Coronation Series. Ash was left with, of course, just his Pikachu standing—from a team containing the electric mouse alongside Dragonite, Gengar, Lucario, Sirfetch’d, and Dracovish—finally taking out Leon’s Charizard to cinch the win.

Although Ash has been a Pokémon champion before, it was only very recently, during the events of the Pokémon Sun and Moon anime, where he became the Alola region’s first Pokémon League winner in his first League win since the anime started. But defeating Leon now makes him a world champion, the highest accolade for a trainer in the Pokémon world. He is, arguably, now the Pokémon Master he’s longed to be since the day he started his journey back in 1997.

So where does Ash, and the Pokémon anime, go from here? While the English-language dub of Ultimate Journeys will continue airing for a while in the U.S. and UK, there’s just three more episodes left to air in Japan. The final episode of the series, “Pokémon! I’m Glad I Got to Meet You!” is a play on the title of the very first episode of the Pokémon anime, “Pokémon – I Choose You!”, and has lead to speculation that either Ash/Satoshi’s time as the anime’s primary protagonist is over, or that the long-running Pokémon anime might end altogether. Regardless of what happens, the Pokémon Company is remaining tight-lipped.

“Ash Ketchum’s determination and perseverance to achieve his goal of becoming the world’s top Pokémon Trainer over the course of 25 seasons represents the very best of what it means to be a Trainer,” Taito Okiura, vice president of marketing for the Pokémon Company International, said in a press release accompanying the episode. “We cannot wait to celebrate this moment with Pokémon fans when the newest season of Pokémon Ultimate Journeys: The Series and this adventure-defining episode air around the world in the coming year. This is a season fans won’t want to miss!”

Pokémon Ultimate Journeys airs exclusively on Netflix in the U.S., with the English-language Ash’s tournament-winning match set to stream there later this year.