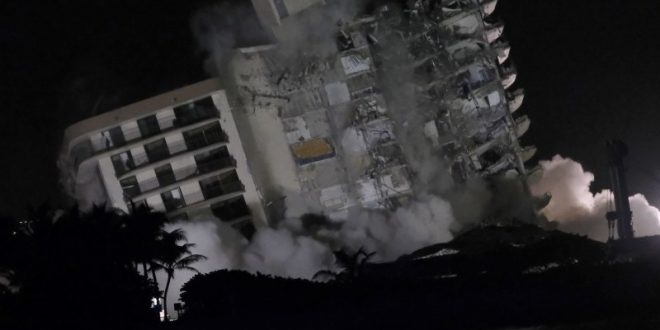 Demolition crews imploded what was left of Champlain Towers South condo in Surfside, Florida, on Sunday. Photo By Gary I Rothstein/UPI | License Photo

July 5 (UPI) — The death toll from last month’s collapse of a condominium building near Miami rose to 28 with the discovery of four more bodies on Monday, local officials announced.

On Monday evening, a fourth body was discovered by search crews.

With the latest discoveries, 117 building residents still remain unaccounted for, she told reporters in an evening update.

“Please join me in praying for those who lost their lives,” she said at the county’s emergency operations center.

The remaining portion of the condominium building was imploded just before 10:30 p.m. Sunday ahead of Tropical Storm Elsa, which is quickly approaching the state and expected to impact the rescue efforts as soon as Tuesday.

The 13-story structure toppled to the ground in around 5 seconds. Crews then were to clear the debris in efforts to reach parts of the underground garage to look for survivors.

The bodies of 28 people, including three children, have now been recovered from the building. More than half the 13-story building, which had 130 units, collapsed on June 24.

The demolition of the remaining building was executed “exactly as planned,” Levine Cava said.

The site was toured Monday by Florida Gov. Ron DeSantis, who said the demolition has allowed rescuers to search through rubble containing what were once bedrooms.

“Likely a lot of people who were sleeping at that time, unfortunately,” he told the Miami Herald.

Rescuers were preparing for the arrival of Tropical Storm Elsa, which made landfall over Cuba Monday afternoon and is headed for Florida. 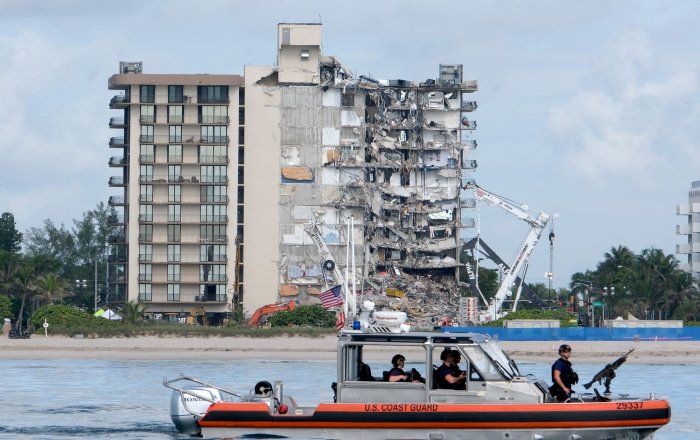 Rescue workers have temporarily stopped the search for victims on Thursday due to a shift in the rubble at the partially collapsed residential building in Surfside, Fla. Photo By Gary I Rothstein/UPI | License Photo