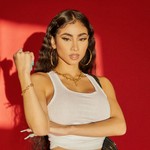 Chilean singer Paloma Mami achieved an exciting milestone this week with her debut studio album, Sueños de Dali, named one of Billboard’s best Latin albums of 2021 (so far). Released on March 18, Paloma Mami’s set was certified Gold by the RIAA this week, making her the “first Latin female artist and first Chilean artist to achieve Gold certification for a debut album with no features in the United States,” according to a statement. “Thank you to everyone who was a part of this project,” she expressed on social media. “And to everyone who simply appreciates my art and vision. I challenged myself and I achieved it.”