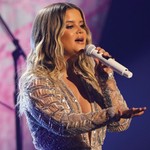 However, he is hoping the coronavirus pandemic has eased enough for all performances to be live, unlike the September event, when the show combined live and pretaped performances. At press time, Whiteside was also hoping to have all acts accept their awards in person, as well as have a small audience in all three venues, if possible.

After 2020’s delay, Whiteside says it was “really important to get back on cycle because that April window has traditionally worked really well for us. People are expecting us in April.”

With the return to the same venues only seven months later, the academy wanted to make sure the show felt fresh. 2020 host Keith Urban, who is up for two awards, will return, but this time with Mickey Guyton, who’s nominated for new female artist, as cohost. That idea emerged shortly after last year’s show when Urban backed Guyton on piano while she performed “What Are You Gonna Tell Her.”

“I’m sitting with the executive-producer team at dick clark productions and we were watching that live performance, and we literally had goose bumps watching her just blossom onstage like that,” remembers Whiteside. “It was so powerful watching Keith play piano for her. We were so moved by it. Literally right after that, we were like, ‘We’ve got to ask her to host with Keith next year.’ We let the show cool and gave it a little time to breathe, but we were thinking about it from then.”

Guyton is the first Black artist to co-host since Charley Pride in 1984. There are other signs that Whiteside hopes point to broader inclusivity in country music.

“We have come a long way when the five most focal singles of the year are female, when you figure there’s been so much discussion about the lack of females at radio and just the lack of female content and presence in general in the country music industry,” says Whiteside.

In addition to Guyton, three other Black artists — Jimmie Allen, Kane Brown and John Legend (for a duet with Carrie Underwood) — are nominated in various categories. “That’s really exciting and a big step in the right direction because we didn’t have any [Black artists nominated] last year,” says Whiteside.

For the third time in four years though, none of the nominees for entertainer of the year are women. And among the 2021 contenders, four are the same as last year — Luke Bryan, Eric Church, Luke Combs and Thomas Rhett — with Stapleton replacing Underwood, who tied with Rhett for the win in 2020.

“It’s hard to get into voters’ minds, but certainly all of these gentlemen had major, major years. I can’t even imagine one of those who shouldn’t be on this list,” says Whiteside. “That’s not to say I don’t think there are some female artists that deserve to be there too, because I absolutely do. I think it just speaks to the fact that we have a really competitive environment right now.”

According to the eligibility requirements, success at radio, consumption and music videos, as well as artistic merit and songwriting, are among the criteria. However, voters tend to heavily rely on live performance as a major indicator, usually nominating artists who regularly sell out arenas.

Whiteside says the awards committee did discuss whether to modify the criteria this year, given that artists were able to tour for only the first two months of the eligibility period (Jan. 1-Dec. 31, 2020), but decided not to alter it because there were so many other factors involved in judging the category.

One artist who will not be involved this year is Morgan Wallen. After a video emerged Feb. 2 of the budding star using the N-word, the academy took the extraordinary step of announcing it was pausing his involvement and eligibility for the 2021 awards. The organization had to act fast, as the second-round ballot was set to hit Feb. 10.

“We felt that it could be a huge detriment to country music and to our industry if the following week a ballot came out with an artist that was in the spotlight with this negativity associated with it,” says Whiteside. “If we’re dedicated to diversity and inclusion efforts — which we are as an organization — how can we just turn and look the other way in this case?”

Whiteside adds that Wallen’s suspension “is not forever” and that voting criteria has not been changed, but to keep him on the ballot “would have really cast a very dark shadow on our awards ballot … and we felt we can’t do that to all the other artists who are so deserving to be part of this awards cycle.”

This year’s show ends the academy’s current deal with CBS. “We remain hopeful that we’re going to have a renewal very soon,” he says, “but we’re still in our negotiating period.”

Looking ahead to 2022, with the pandemic hopefully on the decline, Whiteside says a return to Las Vegas is under consideration, but “we’re strategically looking at where we should take the show. Being that we moved to Nashville, these last two years really showed us that we can be nimble. We have an open playbook at this point.”

Musicians affected by Nashville Christmas bombing among many aided by charity.

Lifting lives, the Academy of Country Music’s philanthropic arm, has distributed $3.5 million directly to individuals in the country community through its COVID-19 Response Fund. More help is on the way.

“In terms of putting money into people’s hands who need it — to feed their family, to pay rent, whatever that looks like — we’re uberfocused on fundraising right now,” says ACM CEO Damon Whiteside.

Lifting Lives usually replenishes its coffers through various Party for a Cause events surrounding the ACM Awards. However, the most recent in-person events were staged in 2019, and the likely inability to gather in person due to the pandemic left the academy to consider other solutions.

“We’re still keeping the possibility out there of a Party for a Cause live event, but knowing that it might be unlikely, we’re also out to market with some virtual event concepts,” says Whiteside. The academy will also highlight Lifting Lives “in and around the show wherever we can,” he says, including providing nominated artists with a “toolkit” so they can promote the nonprofit in interviews and social media.

For the second year, Nashville will host the April 18 awards show. To thank the town for its hospitality, Lifting Lives will donate $25,000 to Music City Inc.’s foundation for their Nashville Christmas Day Explosion Relief Fund. The money will go to local musicians who are out of work due to damage to downtown venues from the Dec. 25 bombing.

This article originally appeared in the March 13, 2021, issue of Billboard.