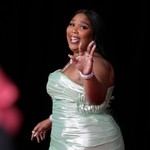 Lizzo is feeling new as hell, as the pop star finally announced her first new single in two years, “Rumors,” will be released later this month.

“NEW ERA BITCH. ‘RUMORS’. 8/13,” she wrote underneath the highly anticipated post of the golden goddess putting her diamond-encrusted nail to her pursed lips in a “shhh” stance to copy the emojis in her caption.