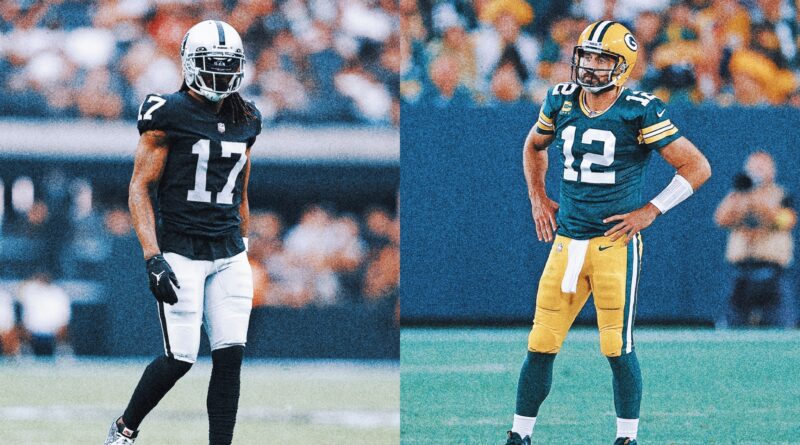 Neither Aaron Rodgers nor Davante Adams is off to a great start since the latter departed Green Bay during the offseason.

Rodgers and the Packers are 2-1 to start the season, but the offense isn’t playing at the level it has at over the previous couple of seasons. The Packers rank 12th in offense, but just 27th in scoring through the first three games, averaging 16 points per game. Rodgers has also put up some middle-of-the-pack stats, ranking 21st in passing yards (684), tied for 13th in passing touchdowns (four), and ninth in passer rating (98.0).

Adams and his Raiders squad have been much worse.

Colin Cowherd reacted to Davante Adams’ comments about the Raiders’ struggles to start the season.

Las Vegas is the only winless team in the league through the first three games, and it ranks 17th in offense and 11th in scoring. Adams ranks 29th in receiving yards (189) and is tied for 23rd in receptions (17). And although he is tied for second in receiving touchdowns (three), it clearly hasn’t been enough for the Raiders to get in the win column.

Rodgers and Adams reaped the rewards of playing with each other for the better part of the last eight seasons. Rodgers is the two-time reigning league MVP and Adams was arguably the game’s best receiver over the last two seasons, recording 228 receptions for 2,927 yards and 29 touchdowns.

And with the early returns in, Colin Cowherd declared Rodgers and Adams “may have been one of those combos where nobody wins the divorce.”

“Green Bay has one touchdown in the second half in three games — one,” Cowherd said on Tuesday’s “The Herd.” “They need [Adams]. With the reigning MVP Rodgers, the Packers are 27th in scoring behind the Jets and the Texans. Green Bay was way better with [Adams]. They were a more lethal team in the second half. With him, when Aaron’s rolling out, stuff breaks down, and you just need a trustable dude.”

Cowherd isn’t pinning all the blame on the Packers though, considering Adams turned down extension offers from Green Bay and asked to be traded to Las Vegas.

“Davante Adams chose a perpetually poorly run franchise with a head coach who failed at his previous gig,” Cowherd said. “With a less talented quarterback, though I like Derek Carr, and a historically bad O-line. … This wasn’t Kevin Durant leaving the Warriors. The Packers aren’t the Warriors title-wise, but it was taking a step back in organizational functionality. … If you consider the Raiders over the Packers, you have to consider everything,” Cowherd added. “The Raiders, over the last several years, have been full of turmoil, strange things, weirdness, instability — it’s part of the everything. It’s part of their everything.

“I think Davante did something I’ve warned people about: He tried to get happier than happy. Green Bay with Aaron Rodgers in that easy division, making all of that money — the Packers were going to pay him — that’s a pretty good life.”