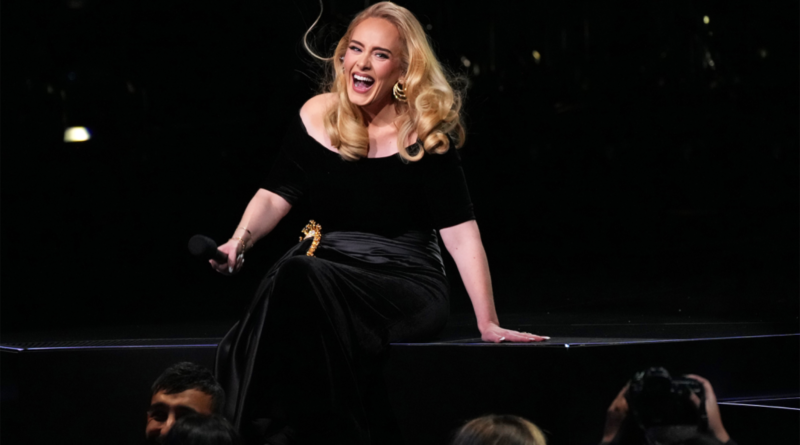 From heckling late concertgoers to weighing her T-shirt cannon options, these were the most hysterical moments at the debut of Weekends With Adele.

Adele performs onstage during the “Weekends with Adele” Residency Opening at The Colosseum at Caesars Palace on November 18, 2022 in Las Vegas, Nevada.

It’s no secret that Adele has one of the most respected voices in music and can write a heartbreaking ballad with the best of them. But what music fans only aware of her chart-topping hits from the radio might not know is just how hysterical she is.

At opening night of her new Weekends With Adele residency in Las Vegas, there were countless moments of Adele’s brilliantly bawdy sense of humor, with the F-bombs flying freely as she briskly bantered with the crowd between songs in the Colosseum at Caesars Palace.

In Billboard’s seven best moments from the show, we highlighted one such moment when she hilariously focused on her love for a certain AMC show.

“I’ve got a lot to tell you. It’s a bloody massive week for me, this week,” she said. “It’s the Walking Dead finale on Sunday! Do we have any Walking Dead fans here?” She was surprised to get a lot of feedback, thinking the opening-night group might be a little too highbrow for the zombie show. “Oh! I thought this was going to be a stiffer crowd than that. I’ve been obsessed with The Walking Dead for like over a decade, and on Sunday it’s all coming to an end.

“And obviously it’s opening night, and it was the Grammys [nominations], and it’s the World Cup — f—ing hell, there’s a lot going on!” she said, offhandedly mentioning the seven 2023 Grammy nods she picked up on Tuesday and her beloved England squad playing in the global soccer tournament starting Sunday.

But that was just the tip of the chatty iceberg. Below, find Billboard’s favorite one-liners and between-song banter from night 1 of Weekends With Adele.