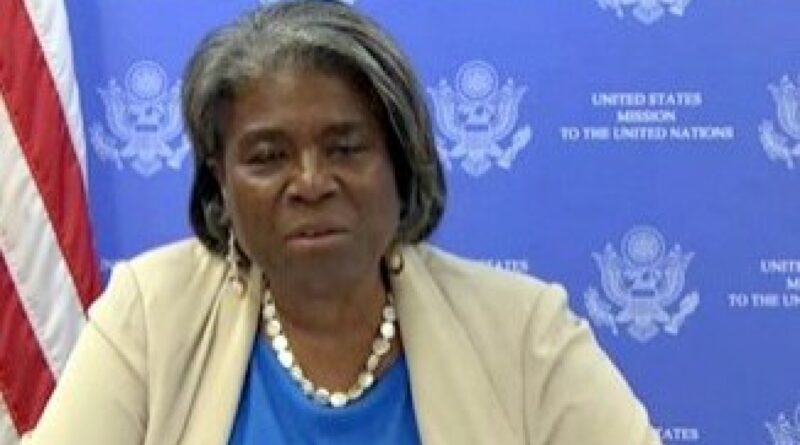 African nations have “unlimited” potential to become “breadbaskets” that not only feed the continent but also a hungry world, Linda Thomas-Greenfield, the U.S. Ambassador to the United Nations, said during a policy address on food security in Accra earlier this month. The Cabinet member with the most broadest African experience and knowledge – she served as Assistant Secretary of State for Africa during President Obama’s second term – her three-nation trip was one of several to the continent in recent weeks by top-level Biden administration officials.

Heightened attention to Africa reflects an ongoing commitment to partnership, she said throughout her travels – a message echoed by Secretary of State Anthony Blinken, who arrived in South Africa as Thomas-Greenfield wrapped up her visits, which included stops in Uganda, Ghana and Cape Verde. Throughout her trip, Thomas-Greenfield pointed to Russia’s invasion of Ukraine as a key cause of rising food costs and insecurity in Africa, and she took sharp exception to charges that U.S. sanctions were pushing prices up, which she called “disinformation”. Sanctions “do not apply to food and fertilizer exports – period,” she said. She also repeated a criticism of China often raised by U.S. officials, warning against “bad deals and debt traps” – a comment that elicited sharp push-back from Beijing.

From her New York office a few days after her return, Thomas-Greenfield shared reflections with AllAfrica’s Tami Hultman in Washington, D.C., on what she heard from both national leaders and engaged citizens she encountered during the whirl-wind journey.

Would you please talk about what you heard from Africans you met? And what you learned from those conversations?

I learned so much from that trip. First and foremost, what I learned is that Africa – the continent, the people of Ghana, the people of Uganda, Cape Verde – they are so resilient. You see resiliency, you see strength, and you see fortitude among the people.

I had the opportunity in Uganda to meet with NGOs, with refugee organizations, civil society groups, young businesspeople. Despite everything that’s going on in the world, they still are hopeful. I saw it in Ghana. I went to the north of Ghana – to Tamale – met with farmers, women farmers; with a woman who had participated in our Young African Leaders Initiative, who had started a program supporting young women who needed to learn a skill. And again, I saw resilience. In spite of everything that’s going on, the resilience and the hope is still there.

African leaders say they are feeling the impact of Russia’s war in Ukraine in high food, fertilizer and energy prices.

What I did hear from African leaders I spoke to in all three countries is that they are feeling the impact of Russia’s war in Ukraine. They’re feeling it in energy prices. They’re feeling it in food prices. I visited a granary – grain mill – in Uganda that gets 40 percent of its wheat from Ukraine. I heard them facing shortages and high prices. Farmers expressed concerns about the high price of fertilizer. The price had more than tripled for these farmers. One told me that he would normally have planted 10 acres. He was only planting four, because of fertilizer shortage. Another woman who was a farmer told me that she normally would have planted five acres, and she was only planting one acre.

As I talked to the leaders, they were very conscious of the impact this was having on ordinary citizens. They wanted to hear from me – from the United States and others – how we were going to assist them in addressing some of these issues of food shortages, food insecurity, security broadly – and addressing some of the economic impact that they are facing.

When you talked to leaders and farmers and women’s organizations, did you find that they are optimistic that what the United States says it will do will be accomplished or be delivered? As you know, there’s been a lot of cynicism about that – and many doubts as to whether the United States will come through on its promises, partly sown by the fact that Covid vaccines reached Africa so little and so late, despite Africans contributions – to testing them and and other ways.

I did hear some of that. But I also saw that people were delighted to see us there, because, as you know, on the heels of my trip, Secretary Blinken arrived in South Africa and visited DRC (Democratic Republic of Congo) and Rwanda. [USAID head] Samantha Power had been in Malawi and in the Horn previously. The active engagement by American leaders was welcomed on the continent. I felt it personally, arriving in Ghana and Uganda and Cape Verde, in the way that I was received by leaders.

We’re not new, Tami, to the to the continent of Africa. We’re not new to any of these countries. We have been engaged in Uganda, providing support in terms of health. When you look at what we we’ve done in the past – through PEPFAR (President’s Emergency Plan for Aids Relief) through the Malaria Initiative, through Feed the Future – in all of these countries, we have always been there for Africa. So I didn’t get the sense that there was not confidence that we would be there. I mean, even when we were not present, physically, our programs and our funding have always been available to people on the continent.

And we announced new funding. I announced $20 million in new funding for refugee programs in Uganda. I announced additional Feed the Future funding in Ghana. So we’ve not neglected Africa in terms of our funding. What we tried to do during this visit is strengthen what is already a solid relationship that we have with the continent of Africa. This was about recalibrating. It was about reasserting our commitment to the continent. But we’re not new to the continent. And we have always put Africa first.

U.S. is “absolutely committed” to support Africa to develop its own vaccines, so they are not “left on the sidelines”.

I did hear concerns about Covid – that Africa was left on the sidelines on Covid. We have, however, over the course of the past two years, given nearly a billion doses of Covid vaccines. We’re very supportive of the effort to develop capacity on the continent of Africa to develop vaccines so that Africans are not left out when vaccines are being delivered. So we heard the concerns. We heard the complaints. And we are absolutely committed to working with African partners to address them.

Well, we’re going to be doing quite a bit over the course of the remainder of this year. The President will be hosting a Food Security Summit here in New York during High Level week, where we will be addressing the broad range of issues that countries have faced related to food insecurity. And as you know, we will be hosting the U.S.-Africa Leaders Summit in December – December 13 through 15 – where we will invite every country. It’s going to be a two-way street [with] African leaders. We will be looking to hear their recommendations on how we can work with them better and what kinds of programs they need to address. They certainly have made clear to us that security is an issue, that we need to take their security concerns seriously.

We’re seeing a lot of backsliding, particularly in west Africa, on democracy. And we want to work with regional organizations like Ecowas (the Economic Community of West African States) to address the root causes and provide support for countries to build the capacity for their democracies to deliver to their people. Because if democracy is going to work, it has to be able to deliver to people. People have to have confidence in their governments, that their governments will provide for them and provide for their families and provide a future for their children.

I think the summit is going to be a huge effort on our part to start the process of recalibrating, but also to really strengthen what is already a solid relationship that we have on the continent.