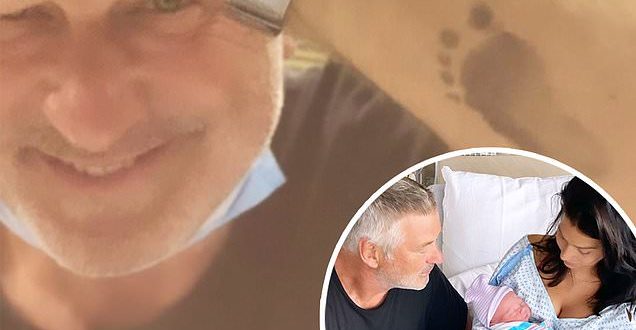 By Rachel Mcgrath For Dailymail.com

He became a father for a sixth time on Tuesday night.

And on Wednesday night, Alec Baldwin showed off a footprint of his latest child ink stamped on his arm in a photo shared by his wife Hilaria on Instagram.

The 30 Rock star, 62, grinned as he held up his forearm to the camera.

Proud papa: He became a father for a sixth time on Tuesday night. And Wednesday night, Alec Baldwin, 62, showed off a footprint of his latest child ink stamped on his arm

Earlier on Wednesday, Hilaria, 36, had announced the arrival of baby number five for the couple via social media.

She and Alec, who wed in 2012, added another boy to their brood, a brother for daughter Carmen, seven, and sons Rafael, five, Leonardo, three, and Romeo, two.

Alec is also a father to daughter Ireland, 24, whom he shares with ex-wife Kim Basinger.

‘We had a baby last night. He is perfect and we couldn’t be happier. Stay tuned for a name,’ Hilaria wrote alongside a snap showing her holding the newborn as she sat in her hospital bed with Alec by her side.

‘He is perfect’: Earlier on Wednesday, Hilaria, 36, announced the arrival of a baby boy, the couple’s fifth child, via social media, sharing a sweet snap of her family’s latest addition

‘Stay tuned’: The celebrity couple have yet to reveal the name of their new son

Second wife: Alec and Hilaria , pictured this past March in New York City, married in 2012. The actor was previously wed to Hollywood star Kim Basinger from 1993 to 2002

Their brood: The new baby will be a brother to Carmen, seven, Rafael, five, Leonardo, three, and Romeo, two, pictured in an Instagram post during their summer in the Hamptons

This comes after Hilaria had a false labor alarm in late August.

She posted a selfie to her Instagram Story and explained: ‘I’ve had a million kids but drove 3 hours to the dr today because I thought maybe I was in labor. You’d think I’d know by now.’

Hilaria went on: ‘With living so far from the hospital due to COVID, I’m trying to anticipate labor even sooner.’

She added: ‘Literally was there for 10 min and had to drive 3 hours back home because I was not in labor. I’m wiped.’

She added the graphics ‘Road Trip’ and ‘Baby On Board’.

‘Road trip’: In August, Hilaria had shared with her social media followers that she’d had a false labor alarm

Baby news: The couple announced they were expecting again in April. In 2019, Hilaria suffered two miscarriages as she tried to add to their family in a quest for a second daughter

In 2019, Hilaria suffered two miscarriages as she tried to add to her family, both of which she candidly documented on social media in an attempt to normalize them for other women.

She and her Blue Jasmine actor husband wanted another daughter to their family after welcoming three boys and have publicly said they will continue trying until that happens.

Also in August, she revealed that her ‘quarantine bubble’ had thrown her a surprise baby shower.

‘I can’t believe that Alec didn’t tell me… Because we all know that he can’t keep secrets from me! So this was soooooo well done!’ she wrote over an image of the Hollywood star with their kids and friends.

Alec and Hilaria have been self-isolating with their children at their home in the upscale celebrity-studded enclave on Long Island.

They left their New York City abode when the coronavirus pandemic broke out in March and they have been holed up there ever since – although it is possibly they returned to the Big Apple just in time for the birth of their child.

Celebration: Hilaria revealed that her ‘quarantine bubble’ had thrown her a surprise baby shower