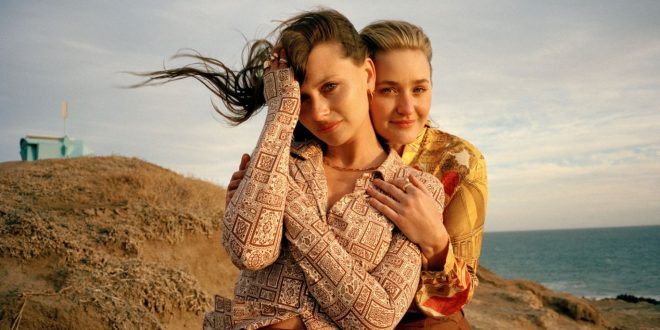 Aly & AJ Step Back Into The Sun

When an artist takes a long break between albums, listeners tend to preserve them in amber at the moment of their last release. If that project came during the listeners’ formative teenage years, the effect is amplified. But no one stays the same over time; both artists and fans learn and grow and evolve. Millennials who came of age in the late 2000s know this to be true for themselves as well as for sisters Aly and AJ Michalka, pop stars and actors who hold a special place in their hearts.

They grew up alongside us. As teens, the pair appeared together in Disney Channel’s film Cow Belles, while Aly starred on Phil of the Future and AJ found roles on Oliver Beene and in The Lovely Bones. Their three albums, culminating with Insomniatic and its breakout single “Potential Breakup Song” in 2007, secured their status as pop-music icons. In the 14 years since, Aly & AJ have aged into themselves just like the rest of us, continuing to work steadily as actors while releasing a handful of dance-pop tracks. Now, with a completed fourth album titled A Touch of the Beat Gets You Up on Your Feet Gets You Out and Then Into the Sun, out on Friday (May 7), they’re ready to reintroduce themselves to the world.

It doesn’t take long to recognize how Aly & AJ’s sound has evolved. While their pop roots are still there, they’ve taken a backseat to vibrant live instrumentation, from the intimately played guitars of “Slow Dancing” to the satisfying punch of percussion on “Don’t Need Nothing.” The album was recorded at the legendary Sunset Sound in Hollywood and shepherded by producer Yves Rothman, who, in addition to producing for Nasty Cherry, previously worked with the sisters on 2019 EP Sanctuary. “We set out with a really specific goal,” AJ says. “We said we wanted to make a record that is played live in a live room at an iconic studio in Los Angeles.” Aly explains they didn’t want to compromise their vision of a live album at all, so they were diligent about safety in order to pull the recording off, with every person involved masking and testing to ensure the process could go on.

The pandemic threw off the original timing for A Touch of the Beat. 2020 singles “Attack of Panic” and “Joan of Arc on the Dance Floor” were meant to be imminent precursors to the album, which was originally slated to drop last year. Aly explains, “We knew that an album was definitely on the horizon, but we didn’t really realize that we had songs that were worthy of being on a full record until December 2019.” When things shut down, the roadmap changed, and the album release was pushed back a year. Most of the songs were well on their way to being done when that decision was made, but there were still changes needed to reflect the moment. “We did rewrite a lot of lyrics in terms of just changing little tweaks here and there, and I think those tweaks for sure had something to do with the moment we were actually living through,” Aly says. She points to 2020 single “Slow Dancing” and its gentle longing for loving intimacy as a track that resonates more deeply after a year in isolation.

The pair wanted to ensure the album would retain the raw intensity of their live recording sessions during post-production, typically the time to apply a final layer of sonic sheen, which meant breaking a bit from old habits that feel innate for longtime pop performers. They spent two weeks recording the album straight through, front to back, before working with Rothman to finish the project with a delicate touch. “I think it’s about not over-polishing the record too much, which, as pop musicians, Aly and I are really used to doing,” AJ says. “In the past, you’re working with Auto-Tune a little bit more, you’re cutting and pasting takes a certain way because you want it to have that ultra glossy sound.” Aly adds that the ease of modern technology can make that polishing tempting, but points out many of the best rock records of the ‘70s and ‘80s are enhanced by their imperfections. She cites Janis Joplin’s work as an example, as her final album Pearl was also recorded at Sunset.

That’s not to say the sisters are completely leaving their roots behind. They maintain the Sanctuary, a fan club that launched in 2019 for their core audience to give feedback and see deeper into Aly & AJ’s lives. Musically, their roots are still sprinkled throughout the album, with Aly specifically pointing out “Symptom of Your Touch” and “Paradise” as tracks with a strong pop foundation. “I think that we’ll always ultimately honor the older sound because it’s still who we were and who we still are. It’s just a new and improved and different interpretation than it was,” she says. They were also delighted when their friends began sending them videos featuring “Potential Breakup Song” on TikTok, where the electrifying track enjoyed a resurgence that spawned millions of views and led to the release of a new, explicit version of the track that dropped at the end of 2020.

The name of the album was taken from the chorus of “Don’t Need Nothing” and came from a moment of clarity during the recording process. “That’s the mantra that sets up this record. That’s what this album sounds like,” AJ says, pointing to the warm and euphoric chorus of “Paradise” and shining guitar chords and energetic percussion on “Don’t Need Nothing” that underscore the titular phrase. Aly adds, “It encompasses the feeling of the record, the fact that it was made in California in the summer and the sun was out even though it was a pandemic, so it makes it strange and weird.”

As Aly & AJ talk about the music and the process of making it, a common theme emerges: taking control and applying their years of lived lessons to an album that will be heard by their generational peers. “The life experience obviously changes, that’s probably the greatest difference making a record at this age and making our first record when we were 15 and 13,” Aly says. (She is now 32, and AJ is 30.) She explains that when they began, a lot of the decision-making was out of their hands and handled by a team of adults, often to protect the teens from the stresses that come with making an album. Those guardrails are now off, and Aly notes with a chuckle that they’re “in the loop on everything whether [they] like it or not.”

And when they say they decide everything, they mean everything, down to their merch. On their first albums in the mid-2000s, they were presented with mostly finished designs and chose from what was put in front of them. Today, the sisters hand-select each detail, from the font to the specific brand of shirts, in order to make sure the finished product meets their vision. They’re particularly proud of this: Whether it’s a sunny slipmat or a shirt that displays the title of the album in simple script, each piece of merch in their store has a description proudly detailing the thought process and effort behind it. On a business level, they’re in control, too, as A Touch of the Beat is the first record where the sisters own their masters. “Ownership is a big word in our camp right now because it does feel really empowering. We kind of own everything at this point, which was not always the case,” AJ says.

Perhaps most importantly, Aly & AJ both say the process of working on the record has brought them even closer together as sisters. Aly notes they live mere minutes apart now, and says “[their] brains are tuned in with each other.” While they say their producer picked up on their synchronicity during recording, the true depth of their relationship is something that can’t be replicated. Through all of the changes the sisters have been through, becoming adults and growing as artists in the lead-up to the release of A Touch of the Beat, their bond is what stands out, the energy that both centers them and propels their growth. As AJ explains, “I just think there’s this connection we have, this kind of unspoken certainty of what we’ve been through that maybe others aren’t clued in on that we just have, and it’s kind of like our love language. We just get it.”