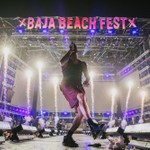 “We’ve been working with every state and city department to make sure that Baja Beach Fest is as safe as possible,” BBF founders Aaron Ampudia and Chris Den Uijl said in a press release. “We’re excited to show the world that live music can come back in a way people can feel comfortable with.”

On a similar note, a local policeman on the ground, who asked to remain anonymous, told Billboard, “Mexico continues to enforce strict laws about not letting the public enter inside establishments without a mask. If they decide to walk outside without one, we can’t issue a ticket, but we always encourage everyone to take precautions for the safety of everyone.”

The measures were enough to make artists feel at ease. “I actually felt weird [returning to the stage], but I felt safe, and that’s the most important thing,” Puerto Rican star Lunay told Billboard. A breakout act just two years ago, the 20-year-old arrived at BBF fresh from releasing his second album, El Niño, and moved audiences with hits off the new release as well as 2019’s Épico.

“I felt like it was a dream,” the artist said in Spanish backstage after his performance. “We were really looking forward to this day and prepared a lot with my team and band. I had a 45-minute show, which is the longest I’ve had in my career. The audience is really unique and I thought it was incredible.”

The first night’s headlining act was Ozuna, who arrived on stage donning a burgundy-colored yacht-like attire, dripping in bling. He opened up with the seductive banger “Adicto,” with hordes of people singing along to every word and beautifully crooned hits like “Tu Foto,” “Dile Que Tu Me Quieres” and “Vaina Loca.”

Another highlight: rock made a comeback, backing up reggaeton superstars as they sang along to their chart-topping hits. During her set, Karol G brought exhilarating guitarist Sus Vásquez, who delivered electrifying rock riffs throughout, even performing the instrument backwards, à la Slash. “Ay, DiOs Mío!” and “Mi Cama” were instant crowd favorites, and Karol captivated the audience with great pipes, and a sexy black leotard to boot. She also performed her just-released first English-language song, the EDM-driven “Don’t Be Shy.”

Earlier in the day, Dalex brought more heat to an already hot summer. Rocking blue checkered pants and a red bandana around his neck, his signature bleached curly hair on point, the Boricua artist slyly crooned to jams like “Para Mí” and “Quizas.” Meanwhile, his punk drummer, who was sporting a Nirvana tee, provided the energetic beat to all his reggaeton cuts. In between sets, DJs expanded beyond the urbano genre, stepping into corridos tumbados, highlighting various hits from Natanael Cano and Junior H.

The crowd sang along to rebellious corridos too, showing an impressive crossover from regional Mexican music and urbano pop. Karol G herself even sang a beautiful corrido on her set, “200 Copas.”

Here’s to hoping we’ll see more genre diversity for Baja Beach Fest in the years to come. But for now, the founders are doing it right by establishing their niche in urbano brilliance.