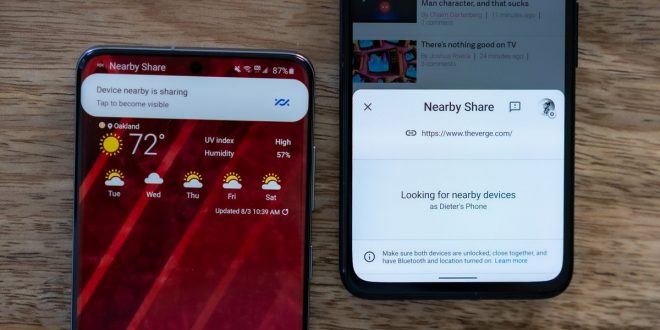 It will finally be slightly easier to share files, images, links, and other content between Android devices. Google is launching a new Android feature called “Nearby Share” that enables direct sharing between any device running Android 6 and up. Nearby Share is already available on some Pixel and Samsung phones, and Google says it’ll arrive on other devices “over the next few weeks.”

Nearby Share works very much like Apple’s AirDrop feature for the iPhone: you simply select the Nearby Share button on the share menu and then wait for a nearby phone to appear. Then whatever thing you’re sharing is sent directly over your transfer method of choice to the other phone.

As with AirDrop, you can set your preferred visibility for Nearby Share to different levels of contacts: all, some, or stay hidden. Google says it’s even possible to “send and receive files anonymously.” (Welcome to AirSlothing, Android users.) Nearby Share also shares files directly via whatever method your two phones deem is fastest: “Bluetooth, Bluetooth Low Energy, WebRTC or peer-to-peer Wi-Fi,” which Google says should allow it to work offline.

Nearby Share works between Android phones and will work with Chromebooks “in the coming months,” but it can’t share to iOS devices, Macs, or Windows machines. Asked if support for any of those were coming, a Google spokesperson said it “plan[s] to try to expand the feature to additional platforms in the future.”

Apple introduced AirDrop on the iPhone and Mac in 2011, fully nine years ago. Since then, Android has gone through a few different iterations and ideas for file sharing, but none have come anywhere near the simplicity and convenience of AirDrop. Also, few to none of those solutions were universally adopted by all Android manufacturers.

Hopefully that won’t be a problem with Nearby Share. Otherwise, Android users will be stuck in the same place, where the only reliable way to share files is to use email or cloud services — which leads to both confusion and unnecessary data fees. There’s reason to hope that it will be widely available, as Google says it can be added to any Android phone via Google Play Services instead of a full OS update.

The icon for Nearby Share looks like a couple of interweaved threads or wires (we’ll go with “Threads” as that word has an appropriately convoluted history for Google). When it’s available for your phone, you’ll be able to toggle availability on and off with a button in your Quick Settings.