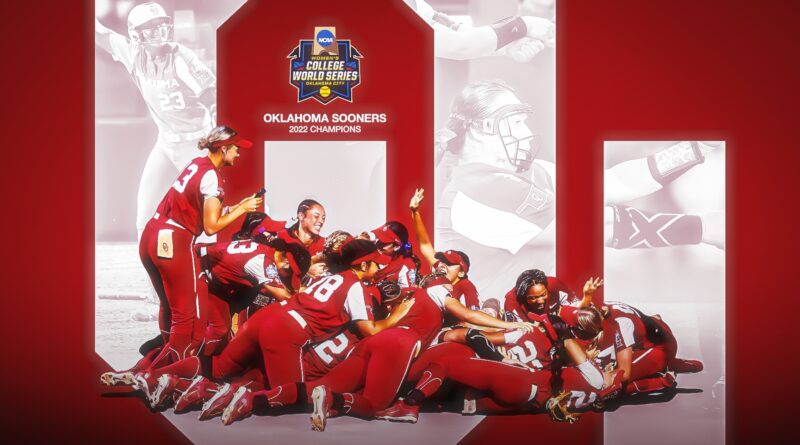 With all due respect to the other teams that set out to win a national championship in Division I softball in 2022, I’m not sure anyone else ever stood a real chance.

Sure, the mighty Oklahoma Sooners lost three games this season en route to their sixth championship in program history and fifth in the past nine years. They were even trailing through three innings in Game 2 of the Women’s College World Series championship series on Thursday against Texas — the team that handed them their first loss of the year on April 16, after the Sooners started the season a Division I-record 38-0 — before they confidently stormed back to a 10-5 victory.

No, Oklahoma wasn’t entirely invincible. But anyone who watched this incredible team this spring knew they were witnessing something special, something historic, something unstoppable.

They were led by Jocelyn Alo, the most powerful hitter the sport has ever seen, whose legendary career concluded in fitting fashion: as a champion.

With her junior season in 2020 cut short because of the pandemic, Alo was able to return to the Sooners for a fifth year as a “super-senior” in 2022. She entered the season needing just eight home runs to pass former Sooner slugger Lauren Chamberlain’s mark of 95 for the most home runs in Div. I softball history.

In fairytale fashion, Alo, a native of Hauula, Hawaii, launched home run No. 96 on March 11 in front of her hometown crowd.

Then it was just a matter of how high she could set the new bar. Alo finished the season with an eye-popping 1.858 OPS and 34 home runs, including five in the WCWS, bringing her career total to a staggering 122 — a mark that might not be touched in our lifetimes.

If this all feels somewhat familiar, it’s because this is the second consecutive year that Oklahoma has won a national championship on the back of a juggernaut lineup headlined by Alo. In fact, you could argue that last year’s lineup was even better than this year’s offensive unit.

So what made this 2022 team better than last year’s squad, which went 56-4 and won it all? (And how could that even be possible?) The pitching got even better.

While seven of the nine starters from the 2021 team returned, only one of its primary pitchers — right-hander Nicole May — came back this season following the graduations of Giselle Juarez and Shannon Saile. That meant head coach Patty Gasso had a lot of innings to replace in the circle. And even if Gasso knew that whoever was pitching would get tremendous run support, the standard in Norman is sky-high, so it was no surprise to see her bring in two incredible pitchers to help fuel another championship run.

The first was freshman Jordy Bahl. Having grown up just outside Omaha, Nebraska, Bahl originally committed to playing for the Cornhuskers when she was in eighth grade, but she switched her commitment to the Sooners after she burst on the scene as one of the best pitchers in the country as a junior in high school. She was the Gatorade National Player of the Year as a senior at Papillion-LaVista High School, and she carried that momentum into her first season in Norman, where it didn’t take long for her to introduce herself to the national softball audience as a force to be reckoned with.

Although she dealt with a forearm injury that kept her out for much of the final month of this season, Bahl was able to start Game 2 of the championship series and kept Oklahoma in the game until the offense came alive.

Her presence in the circle is as intimidating as the stuff itself, and this is clearly just the beginning of what will surely be a storied career with the Sooners.

Unlike Bahl, Hope Trautwein wasn’t a hotshot prospect during her prep career at Hendrickson High School in Pflugerville, Texas. She ended up going to the University of North Texas, where she became one of the best pitchers in Conference-USA.

Last year, Trautwein received national attention when she struck out all 21 batters in a perfect game against Arkansas-Pine Bluff. But Trautwein first got on Gasso’s radar a year prior, when she closed out a victory for North Texas in Norman on Feb. 29, 2020, which also happens to be the last time Oklahoma lost a home game. The Sooners have since won 46 in a row at home, going undefeated in both 2021 and 2022.

Like Alo, Trautwein had another year of eligibility following her senior season in 2021, and she chose to transfer to Oklahoma. Her career numbers at North Texas were outstanding: a 2.05 ERA with 693 strikeouts in 598.2 innings pitched and a 61-24 record. But it was worth wondering if that dominance would translate against tougher competition in the Big 12.

Well, it certainly did: Trautwein posted a 0.77 ERA in 126.2 innings for the Sooners and performed on the game’s biggest stage when her team needed her most. She even got her own hashtag, which the Oklahoma softball Twitter account never hesitated to use: #HopeIsDope. Strong agree.

The dynamic duo of Trautwein and Bahl — along with the continued excellence of May, who posted a 1.30 ERA in 91.2 innings of work — does well to demonstrate why Oklahoma has been so dominant over the past decade. Whether through recruiting the best high school players in the country or bringing in potential superstars via the transfer portal, Gasso has ensured that the roster maintains an exceptionally high level of talent no matter what.

Now you might be wondering: Can the Sooners do it again next year? A three-peat has happened only once in Division I softball history (UCLA, 1988-90).

Let’s start with the obvious: There is no replacing Alo. There are some amazing players still on this roster, but Alo is a once-in-a-lifetime presence atop the lineup, and we might not see another player like her for a very long time — if ever.

Plus, Alo isn’t the only important contributor the Sooners will need to replace. Trautwein, third baseman Jana Johns, first baseman Taylon Snow and catcher Lynnsie Elam will all be graduating as well. Those are not just crucial at-bats to replace but also important spots in the infield that will need backfilling.

Then again, there’s still so much talent on this roster that no one would be that surprised if the Sooners enter 2023 ranked No. 1 and make a run at another national championship.

Bahl will remain the headliner in the circle as she continues to establish herself as one of the best pitchers in the country. May will be back for her junior year. On offense, Tiare Jennings — off to a historic start to her career, with an astonishing 56 home runs through her first two seasons — will surely lead the charge, along with electric center fielder Jayda Coleman in the leadoff spot.

Senior shortstop Grace Lyons has another year of eligibility, which we can assume she will use, but we don’t know for sure. Her return, considering her spectacular defense at short and newfound power at the plate, would be huge for OU.

Catcher Kinzie Hansen, whose injuries limited her to more of a platoon role in 2022 after she was an All-American in 2021, should be back as well. There are also several talented freshmen besides Bahl who didn’t get much playing time this year but will surely see more action on the field as spots open up.

You also shouldn’t be shocked to learn that the Sooners are bringing in four highly touted recruits, including the top pitcher in the Class of 2022, a lefty from North Carolina named Kierston Deal. And it seems awfully likely that the Sooners will bring in another talented player or two via the transfer portal.

The years of the Alo-led dynasty might be over, but if history has taught us anything, it’s that the next wave of Sooner stars will surely keep Oklahoma at or near the top of the softball world for years to come.