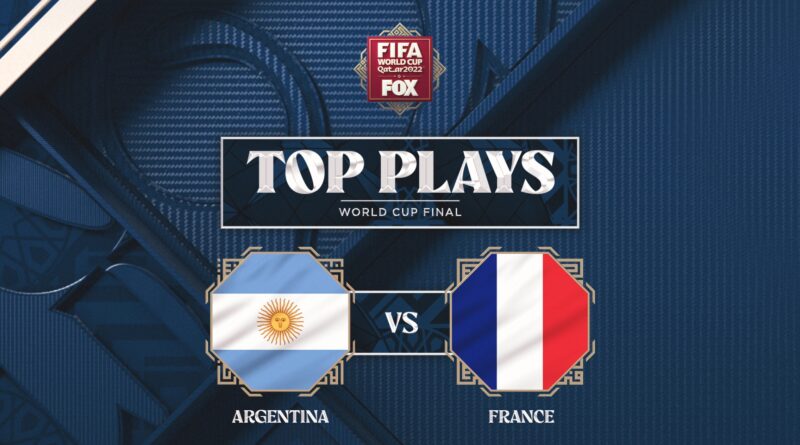 Lionel Messi has finally done it.

Messi scored twice in the match, including a goal in the 108th minute that appeared to win it for Argentina. However, Kylian Mbappé scored on a penalty kick in the 118th minute to complete the hat trick. Mbappé had previously scored two goals in two minutes to even the match in the 81st minute.

In penalty kicks, Argentinian goalie Emiliano Martinez made a stop in the second round and Aurélien Tchouaméni’s penalty kick went wide in the third round, proving to be the difference in the match.

With the win, Messi won his first World Cup and will likely go out a champion as he’s indicated this will be his final World Cup.

Here’s everything that happened in Sunday’s classic.

8′: Argentina close to getting on the board first

Rodrigo De Paul had a solid opportunity for Argentina in the early minutes but his shot was blocked and went out for a corner kick.

The French goalie needed a few moments to gather himself after a collision on a contested ball in the box. Lloris remained in the match.

Argentina controlled much of the match in the early minutes. It got a golden opportunity after France turned the ball over on its own side of the field, but Angel Di María wasn’t able to capitalize on the chance.

20′: Giroud a little too aggressive

Olivier Giroud’s header of the set piece sailed over the net, though he committed a foul while trying to get to the ball.

Di María got a clear path into the box but was fouled by Ousmane Dembélé, giving Argentina a penalty kick.

Did you expect anything different? Lionel Messi took advantage of the opportunity and scored on the PK to give Argentina a 1-0 lead. With the goal, Messi became the first player in World Cup history to score in all four knockout rounds.

The goal certainly brought a lot of excitement to the Argentinian fans in Doha.

And Messi played it cool in the celebration.

36′: Di María makes up for missed chance and puts Argentina up 2-0

Argentina got out in front on the attack after forcing a turnover around midfield. Alexis Mac Allister found an open Di María on the other side of the box to make it 2-0 Argentina. While many questioned his insertion into the lineup, Di María has proved he belongs as he drew the PK that set up Argentina’s first goal of the match.

Down 2-0, France is pulling out all the stops. It subbed out Giroud and Dembélé for Marcus Thuram and Randal Kolo Muani.

The defending World Cup champs’ quest to be the first nation to win back-to-back titles is in jeopardy. Argentina has dominated much of the final, scoring two goals while France has yet to even record a shot.

Fans back in Buenos Aires are certainly feeling the excitement.

Julián Álvarez’s pass to Mac Allister was just a bit too hard on what would’ve been a golden chance to make it 3-0 Argentina.

64′: Di María subs out and gets an applause

The decision to start Di María paid off for Argentina as he scored its second goal and played a major role in its first one.

71′: Mbappé finally gets a shot off, but misses

France has struggled to get a shot off all match and its superstar didn’t record his first shot until the 71st minute, which sailed over the net.

France has a chance to make it interesting after Randal Kolo Muani drew a penalty.

80′: Mbappé gets France on the board

Kylian Mbappé put France on the board with his PK to make it 2-1 with at least 10 minutes remaining.

We’ve got a thriller in the World Cup final as Mbappé capitalized on the Messi turnover to even the match up and bring France back from the dead.

France looked like it was going to have an opportunity to take a 3-2 lead on a penalty kick. However, Thuram was hit with a yellow card instead for diving.

France created chaos in front of the net in added on time, believing it also drew a penalty in the box. But the ball found its way back to Argentina.

Messi nearly scored a goal for the ages as his strike  was on target but Lloris made the big save to send the match to extra time.

France’s hopes to repeat as World Cup champions looked finished for much of the second half. But a penalty in the 80th minute kept it alive and Mbappé scored a second goal to even the match in the blink of an eye.

105′: France gets a huge tackle to keep the match even

Lautaro Martínez was 1-on-1 with the goalie but Dayot Upamecano slide in almost out of nowhere to stop the shot and keep Argentina off the board.

The Argentinian striker had another great chance but it went wide.

108′: Messi does it again for Argentina!

Messi might have just won the World Cup for Argentina with a wild goal in front of the net. Argentina was just barely on side and Messi got the ball off a rebound and kicked it in the net even though a French defender got a foot on it as the ball already crossed the line.

France will get at least one more great opportunity to even the match after Mbappe’s strike hit the arm of a Gonzalo Montiel in the box.

Mbappé completed the hat trick by converting on the penalty kick.

Emi Martinez made the boot save to save Argentina and send the match to PKs.

Mbappé, Messi trade goals in opening round of PKs

Martinez gets the stop for Argentina, Dyabala scores in Round 2

France misses, Argentina scores in Round 3

It took four rounds for Argentina to win it as it scored in all four rounds to help win its first World Cup since 1986.

Messi shared hugs with everyone, including his kids following the match.

Martinez and Argentinian manager Lionel Scaloni were emotional after the win

Messi sneaked in a kiss with the World Cup trophy when he collected the Golden Ball trophy.

Messi and Argentina lift the trophy!

Looking back at how we got here

Tom Rinaldi recapped the 2022 FIFA World Cup and how Sunday’s matchup between Argentina and France came about.

Tom Rinaldi reflects on the 2022 FIFA World Cup and all of the top storylines along the way.

Tom Rinaldi previewed Sunday’s match by saying what’s on the line for the legacies of Lionel Messi and Kylian Mbappé.

Will Kylian Mbappé take the torch from Lionel Messi in the 2022 FIFA World Cup?

Tom Rinaldi breaks down the significance of both Lionel Messi and Kylian Mbappé’s legacy ahead of the 2022 FIFA World Cup.