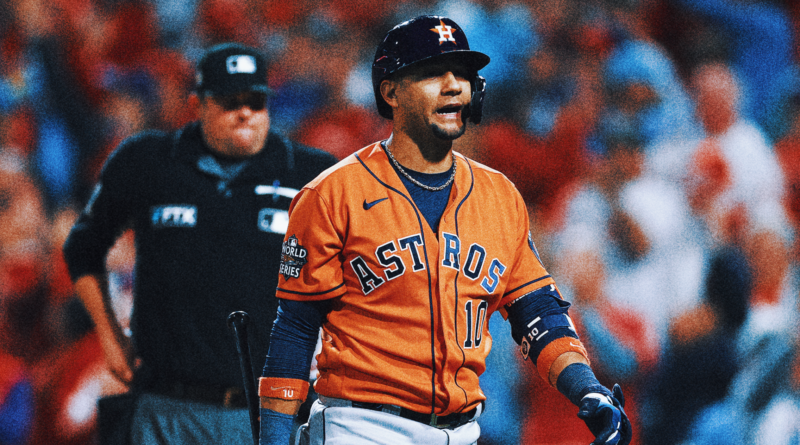 If the Houston Astros are going to win the World Series, they’re going to have to do so without their starting first baseman.

Yuli Gurriel will miss the final two games of the World Series (if necessary) due to a knee injury he suffered in Game 5. The Astros removed Gurriel from the active roster and replaced him with catcher Korey Lee ahead of Saturday’s Game 6.

The extent of Gurriel’s knee injury isn’t known, but Astros manager Dusty Baker said that Gurriel and the team “tried everything” to get him to play.

“He wasn’t crying, but he had tears in his eyes,” Baker said of Gurriel. “You could tell how badly he wanted to play. He just couldn’t, and we had to replace him.”

Gurriel’s numbers at the plate took a notable dip this year, hitting .242 with a .647 OPS, while adding eight homers and 53 RBIs.

Trey Mancini replaced Gurriel at first base for the remainder of Game 5 and will presumably start there in Game 6. He’s struggled at the plate since he arrived in Houston ahead of the trade deadline, posting a measly .176 batting average in 51 regular-season games. Mancini’s struggles worsened in the postseason as he’s 0-for-18 in the playoffs.

The Astros are up 3-2 in the series against the Phillies and can win it all in Game 6 on Saturday night.