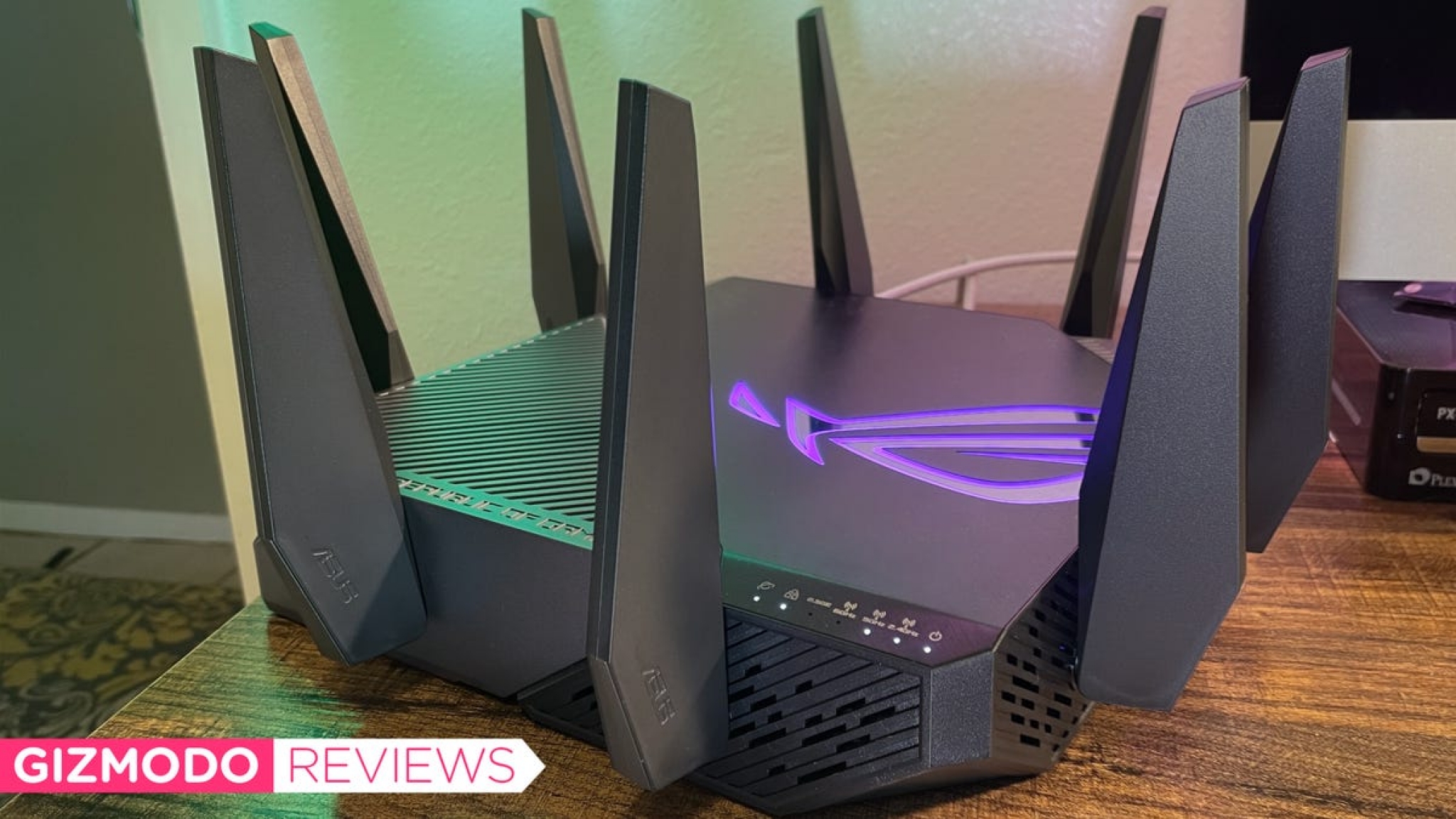 It seems like only yesterday that Wi-Fi 6 routers really started to hit the market, and that’s true—the first products trickled out in late 2018, and the new 802.11ax standard is only now going mainstream. But the FCC has opened up the 6 GHz band to unlicensed use, so router manufacturers are taking the ax protocol to that band with new Wi-Fi 6E hardware. But are you missing out by not upgrading? We took one of the first Wi-Fi 6E routers, the tri-band Asus ROG Rapture GT-AXE11000, for a spin to find out.

Ultimately this is, first and foremost, a gaming router. The Rapture GT-AXE11000 is part of Asus’ Republic of Gamers line of products: a series of devices and peripherals designed specifically to separate gamers from their money as efficiently as possible. It comes with a glut of features to that end, and a lot of them are blessedly easy to use. Pre-configured settings, for instance, give players custom port-forwarding rules for many of the most popular, demanding games the kids play these days, including Fortnite, Borderlands 3, DOTA 3, and, of course, Animal Crossing: New Horizons.

This Router Is Gigantic

The updated Rapture is a massive, square-ish follow-up to 2018’s GT-AX11000. It’s covered in vents, with eight fat, articulating (and non-removable) antennas affixed to the sides and a faux brushed metal plastic plate on the top featuring a blazing LED-lit eye-shaped ROG logo. Stare too long at it, and it will begin to stare back.

On the back, you’ll find a power button, reset pinhole, four gigabit LAN ports, one gigabit WAN port, and one 2.5 Gb LAN/WAN port. Two USB 3.2 ports on the side let you connect hard drives or charge devices, while the front left corner has three buttons: one for WPS, one for toggling wifi, and a configurable “Boost” button that can be set to toggle the big ROG LED, turn on Dynamic Frequency Selection, cycle through RGB settings, or, you know, turn on Game Boost. On the right front, you’ll find small white LEDs giving you status lights for internet, gigabit LAN, 2.5 GbE LAN, and all three wireless antennas.

On the technical side, Asus claims the Rapture is able to reach up to (a theoretical) 11,000 Mbps. Each of its three bands is capable of 4×4 multi user-multiple input multiple output (MU-MIMO), which refers to the number of concurrent broadcasted data streams it’s capable of, which in this case is four. It’s powered by a 1.8 GHz quad-core CPU equipped with 1GB of RAM.

As a Wi-Fi 6 device, the Rapture is equipped with Orthogonal Frequency Division Multiple Access (OFDMA), a complementary technology to MU-MIMO that, in some ways, solves the same problem as MU-MIMO. Where the latter is meant to help with more demanding tasks like video meetings, OFDMA works better with small-packet devices like IoT gadgets. The router also supports link aggregation, enabling users to take up two ethernet ports on the router for increased bandwidth for things like local file transfers or redundant connections on devices you’d rather didn’t fail.

Other features include a gamer-focused dashboard where you can look at real-time graphs of network activity, ping, and jitter, as well as a “Game Radar” widget that shows your current connection speed to a given game’s servers across the world. You can access a more robust version of this feature from the sidebar for more detailed information. There are also four pretty easy-to-understand QoS modes—that is, modes that prioritize certain types of internet traffic. I particularly liked the ability to map the Game Boost feature to the “Boost” button on the front of the unit, which may sound gimmicky at first, but being able to modify QoS priority on the fly like that is extremely convenient.

It’s when you move past the gaming features, however, that things really start to get murky.

You can’t really say the Rapture is lacking in administration tools or features—in fact, one consistent thing about Asus’ router UI design is that, disorienting though it may be, it affords the user a great deal of administrative control. However, if you are hoping to play with settings beyond the specially-tailored gaming options and AiMesh/AiProtection features, you may find that unless you’ve got years of experience as either a hobbyist or networking professional, the advanced section may as well be written in another language. The options here are very technical, and while it’s improved somewhat over the years, you’ll still find settings that lack key information to explain what they do. Some of these settings are integral to the appeal of the tech, yet are disabled or hobbled by default, like MU-MIMO or OFDMA on the 5 GHz band.

The last thing of note with the software is the spooky Trend Micro agreement you have to get past to access certain features, like adaptive QoS, or security features like AiProtection. On one hand, it’s nice to get that sort of thing for free, without needing to be technically knowledgeable enough to set up a Pi-Hole for network-level ad-blocking and such, but on the other hand, users may be reticent to share information about their network, connected devices, web-browsing habits, and more with Trend Micro. However, as I concluded in my RT-AX86U review, it doesn’t seem like the data is used for any other purpose than to facilitate network security. Additionally, you can opt out of most of the collection (though this may affect the security features’ efficacy).

So OK, how did it game? After being embarrassed over the course of many Counter Strike: Global Offensive sessions, I can confidently say this is a very good gaming router. Hardwired to the router, most of my games connected to the official servers showed my ping ranging from the upper 40s to low 60s. Latency on my normal Eero setup usually measures in the 70-90ms range, making the Rapture a vast improvement. Even without QoS turned on, my ping sat around the mid-60s, which has historically been, for me, about as good as it gets. When QoS was on, I had some sort of high-bandwidth activity going on on every device I could muster for the task, and the Rapture didn’t blink—gaming was smooth as could be.

However, gaming devices are not the only things I need reliable, good performance out of in my home.

With three cameras, gobs of lightbulbs, smart switches, robot vacuums, sensors, and more, I need my router to play nice with myriad devices hollering at each other all the time. This is where the Rapture and I began to quarrel. Throughout my almost two weeks of testing, I had what felt like an unending stream of network issues pertaining to all of these gadgets.

Smart bulbs, plugs, and switches became unresponsive seemingly at random, smart speakers behaved erratically, and while streaming music to AirPlay 2 devices seemed to mostly work, trying to adjust volume or skip tracks had massive delays, if those adjustments made it at all—it was like there was a hole blown in my network and packets were just streaming out. A few devices never failed, while the rest worked sometimes, but my endless fiddling with the network never satisfied all of them at once. A factory reset seemed to help, but the best solution was using my normal mesh router setup as the backbone of the network and primary connection for my smart devices, and the Rapture as an additional access point for gaming-specific or streaming purposes.

As frustrating as this experience was, it’s hard to deny the Rapture GT-AXE11000’s bona fides, otherwise. By the numbers, it truly has incredible performance—even 100 feet away in my back yard, with multiple walls, a packed-to-the-brim closet, and a few trees, the router was able to pump up to 320 Mbps to my 802.11ax-equipped M1 MacBook Air – this in either Wi-Fi 5 or Wi-Fi 6 mode. In fact, at that distance, outside, I found Wi-Fi 5 actually had slightly better throughput. All testing within my home, however, had Wi-Fi 6 ahead. Testing on the WiFi 6E band was even more impressive, at least at close range.

Using the WiFi 6E-equipped Samsung Galaxy S21 Ultra, the aforementioned MacBook Air hardwired with a 2.5 Gb USB-C ethernet adapter, and network-testing software iperf, I recorded transfer speeds in excess of 1.8 Gbps wirelessly. A little farther out, however, throughput drops dramatically—at 25 feet, it lost about 3/4 of its throughput (423 Mbps average), while at about 45 feet, only about 10% of the speed was left at 167 Mbps. With WiFi 6E being so new, it’s hard to know what to really expect at these distances, and of course, your mileage may vary, depending on the layout of your home. That said, relative to the only other router I’ve performed similar tests on so far—the Linksys Hydra Pro 6E—the octopodian Rapture did about twice as well at 25 feet indoors, but performed roughly the same at 45 feet, when I moved outside to continue testing. Both routers’ signals collapsed pretty immediately when I got farther.

Of course, both can also be used as mesh routers, which should address the range issue. I was unable to test the Rapture with another 6E router, but did do so with an Asus RT-AC88U, and as with the RT-AC86U, I found setup to be easy, and was pleased with the actual usage of the two in tandem. I rarely saw the wrong devices connected to the wrong node, and though I could actually get higher throughput with devices connected to the Rapture deep in my backyard, the connection was more stable when connected to the AC88U. Notably, once I enabled Asus’ AiMesh feature, the 6 GHz band was shifted to strictly wireless backhaul, regardless of the fact that the mesh node was not a 6E device and couldn’t use it. This is similar to the way the Ubiquiti AmpliFi Alien handles its WiFi 6 band, which is also reserved for backhaul, but on the Asus, you can disable this feature.

Do You Need to Upgrade to Wi-Fi 6E?

In the end, in an increasingly complicated, multifaceted home networking future with dozens of actively transmitting devices, it is becoming increasingly likely that a serious gamer will also have a very intricate, demanding network. A router you pay hundreds of dollars for should, therefore, be capable of not just properly prioritizing and routing gaming traffic, but also of making sense of all the bits whizzing around it in a home full of wifi antennas. For gaming die-hards, I’m not sure I see a reason to recommend this router over its predecessor, which is $100 cheaper—at least not for a few more firmware releases.