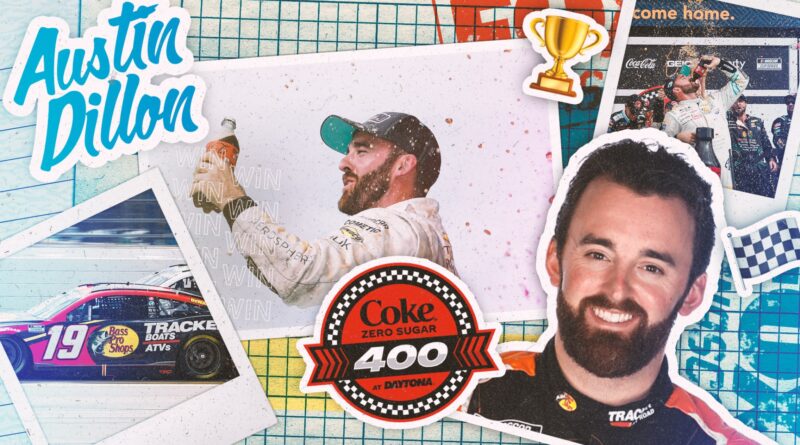 DAYTONA BEACH, Fla. – Austin Dillon appeared to have earned a spot in the NASCAR Cup Series playoffs, and then NASCAR decided to spend more than three hours drying a race track just to run the final 20 laps at Daytona International Speedway.

NASCAR’s regular-season finale was one drenched in rain, drama and potential controversy, capped by the final 20 laps where Dillon lost the lead and then regained it with three laps remaining to earn the trophy and a spot in the playoffs.

“To go through all that and to be able to be clutch in a moment that mattered is important,” Dillon said. “In all sports, it’s [important] to deliver when you’ve got the opportunity to deliver. … It feels good to finish it off.”

Ryan Blaney, who was involved in an early wreck, finished six laps down but in 15th — only 17 of the 37 cars were running at the finish — and limped his way to a playoff spot as a wounded Martin Truex Jr. placed eighth to end up three points behind Blaney for the one playoff berth available to a driver who was winless during the regular season.

Dillon was leading and Truex was in the playoff spot when the race, already postponed from Saturday night because of rain, was halted for 3 hours and 19 minutes following a Sunday afternoon storm. NASCAR could have declared the race official after 140 of the scheduled 160 laps (because the race was past the halfway point) but opted to race its regular-season finale to the finish.

It was a little miraculous that Dillon was even in that position. In the lap prior to the rain delay, drivers were jockeying for position knowing the rain was coming and the race could end when 15 cars crashed on a wet track when heavy rain started to pelt the track and NASCAR didn’t throw the caution soon enough to prevent the carnage.

Dillon, who was involved in an earlier wreck, was running 15th when the accident happened, and he got by the carnage for the lead. When the race resumed, he lost the lead quickly but was able to tap leader Austin Cindric to push him up the track and regain the front spot with three laps remaining.

Austin Dillon wins at Daytona to lock himself into the playoffs in wild finish over Austin Cindric and teammate Tyler Reddick.

Dillon got a push from teammate Tyler Reddick over the final few laps, and Reddick opted to settle for second instead of trying to make a daring move for the win. Reddick, who already has won twice this year so he already was in the playoffs, helped his Richard Childress racing teammate a month after announcing he’d be leaving the team after the 2023 season for 23XI Racing.

“He’s been, in a way, inspirational to me to pick up my game,” Dillon said. “He has got so much speed, and he shows it constantly. … When he got to my back bumper, I knew I could trust him.”

Truex was in relatively good shape after the first two stages as he had closed the gap to 10 points behind Blaney — and with Blaney a few laps down, all he needed to do was stay out of trouble and he likely would be good.

But he then found trouble as he was caught up in an incident with 58 laps remaining. His car was damaged enough that he was far from guaranteed from finishing the 11 spots ahead of Blaney that he needed. He lost five spots after the race resumed and Blaney moved up 14 spots as he caught the drivers whose cars were trashed in the wreck prior the delay.

“It sucks,” Truex said. “No way of sugar-coating it. You race your ass off all year, and you work hard and you try to do all the things it takes and you come up three points, it’s tough to swallow.”

As rain approaches, the front two cars get loose and a wreck collects almost the entire field at Daytona International Speedway. Austin Dillon makes it through.

Truex said he had too much damage to hold on to the spots he needed in the final 20 laps.

“No emotions,” Truex said. “You come here and race. It’s another race. You just come here and try to get it done. We did our best and it wasn’t enough.”

Blaney was collected in a wreck on Lap 31 and had to sweat the rest of the day, including the rain delay, as Truex would have earned the playoff spot if the race had not resumed.

“I had fully accepted the fact that it could downpour at any moment and we’d be out,” Blaney said.

Once racing resumed, Blaney also had to accept the fact that much was out of his control.

“You just hope that everything gets wild, and it looks like the 19 [of Truex] kind of got shucked out there and lost some spots and wasn’t able to get them back,” Blaney said. “There really wasn’t anything I could do.

“You’re just riding around trying to complete the laps and whatever happens, happens.”

From start of the race to finish, it was more than a six-hour roller coaster for Blaney.

“I’m going to go home and crack open a beer and relax a little bit because that was a stressful day,” Blaney said. “That was a long weekend. … You get wrecked and then you have a three-hour rain delay.

Obviously, the drivers who were leading the race when they crashed were critical of NASCAR of not throwing the caution moments earlier when it started to rain.

“I feel like they have a lot of technology to know that the rain is very, very close,” said Daniel Suarez, who was leading at the time.

“I don’t think it’s hard to not put us in that position.”

Denny Hamlin, who was battling Suarez for the lead at the time, said the way to prevent it is with better officiating.

“I got to the lead at the right time, but also a bad time because we were the first ones to get to the rain,” Hamlin said.

“We had been dodging a little bit of weather for a little while,” Miller said. “Nothing had hit.  And all of a sudden there was that shower.

“The pace car was sitting down there on the inside [behind the wall there]. It was still dry when they wrecked. … Just a super bad situation for everybody.”

Bob Pockrass has spent decades covering motorsports, including the past 30 Daytona 500s. He joined FOX Sports in 2019 following stints at ESPN, Sporting News, NASCAR Scene magazine and The (Daytona Beach) News-Journal. Follow him on Twitter and Instagram @bobpockrass. Looking for more NASCAR content? Sign up for the FOX Sports NASCAR Newsletter with Bob Pockrass!

Get more from NASCAR Cup Series Follow your favorites to get information about games, news and more.