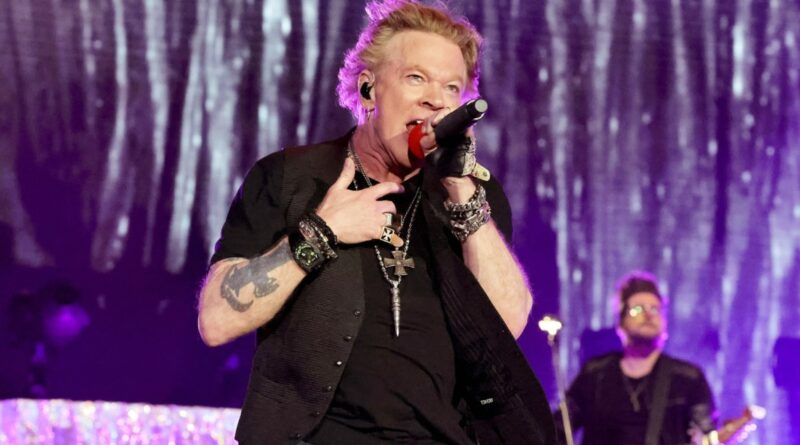 The singer heard the story, saw the photos, and he’ll change the show accordingly.

Axl Rose of Guns N’ Roses performs during Day 2 of the 2022 Stagecoach Festival at the Empire Polo Field on April 30, 2022 in Indio, California.

When Guns N’ Roses come to an arena or stadium near you, there won’t be any chance of Axl Rose’s microphone smacking you in the face.

The reunited rock legends’ front man has pledged to quit throwing his mic into the crowd, a decades-long tradition, after a fan apparently sustained facial injuries when she was hit during a concert in Australia.

According to the Adelaide Advertiser, Rebecca Howe was left with two black eyes and a bloody nose when Rose threw his mic at the completion of their set.

Following a rendition of the final song “Paradise City,” Rose “took a bow and then he launched the microphone out to the crowd … and then bang, right on the bridge of my nose,” she told the title.

The microphone then reportedly bounced into the hands of another concertgoer.

“My mind went, ‘Oh my God, my face is caved in,” she continued, adding that she was left hyperventilating following the incident, and in a state of “shock”.

Rose heard the story, he saw the photos, and he’ll change the show accordingly.

“It’s come to my attention that a fan may have been hurt at r show in Adelaide Australia possible being hit by the microphone at the end of the show when I traditionally toss the mic to the fans,” he writes in a social post.

“If true obviously we don’t want anyone getting hurt or to somehow in anyway hurt anyone at any of r shows anywhere,” Rose wrote.

Having tossed the mic at the end of show for over 30 years, the singer continued, the band felt “it was a known part” the performance “that fans wanted and were aware of to have an opportunity to catch the mic.”

That said, “in the interest of public safety from now on we’ll refrain from tossing the mic or anything to the fans during or at r performances.”

GNR’s stadium tour down under wraps this Saturday (Dec. 10) at Eden Park in Auckland, New Zealand, the finale of an eight-city swing. TEG Dainty is producing the Australia and NZ leg, which features the classic line-up of Axl, Slash and Duff McKagan, with The Chats, Cosmic Psychos and Alien Weaponry in support.