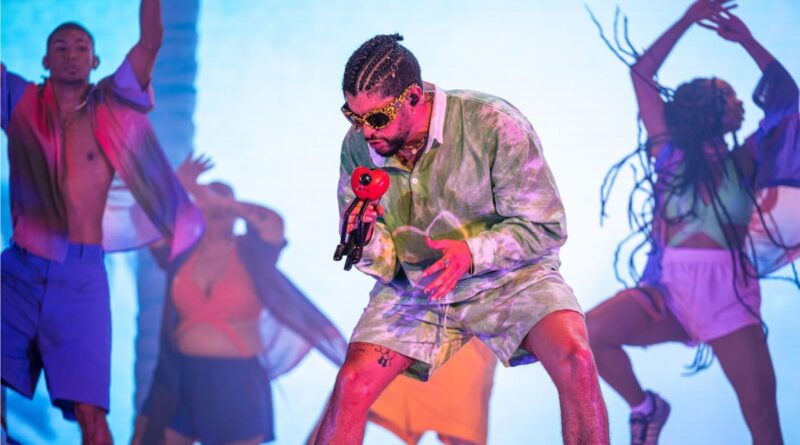 After officially kicking off his World’s Hottest Tour in Orlando, Fla., and then Atlanta, Bad Bunny made his way to Miami for two back-to-back shows at Miami’s Hard Rock Stadium, with the first one taking place on Friday (Aug. 12).

Very on-brand with his latest studio album, Un Verano Sin Ti (Rimas Entertainment), Bad Bunny stans of all ages arrived at the venue wearing everything from neon-colored fits, bathing suits, shorts, linen shirts, sunglasses and bucket hats. If not, long lines formed at every merchandise stand, including a truck outside, to get the UVST gear, including the album in CD format, tees, beach towels and a sad heart-shaped plush, to name a few.

At exactly 7:45 p.m., Swedish DJ Alesso pumped up the crowd with a 30-minute opening set while fans rushed to their seats. A little after 9 p.m., the lights dimmed, a seagull call filled the open stadium, and the man of the hour appeared lonely, sitting on a beach chair, singing “Moscow Mule.”

Wearing plaid pants and a long-sleeved shirt, white sunglasses, and rocking braids, the Puerto Rican artist immediately blessed fans with his Chencho Corleone-assisted “Me Porto Bonito,” which is currently in its 12th week at No. 1 on the Billboard Hot Latin Songs chart. Though Chencho did not join Bunny onstage, the artist impressed fans with his perreo skills, dancing against a palm tree on stage.

For about the first 30 minutes, Bad Bunny was alone on the stage — sitting on a beach chair, surrounded by palm trees, sand, and his cooler — transmitting the exact vibe of his conceptual album, “a summer without you.” He then performed “Un Ratito” and the TikTok viral “Efecto.”

“Good evening, Miami, welcome to the World’s Hottest Tour,” he greeted the fans. “Thank you for being here. This is another highlight of my career and all I ask is for you to have a great time and walk away from here with a nice memory. You are the most important part of this tour, without you, I wouldn’t exist. Without you, this concert wouldn’t be a party.”

The artist born Benito Antonio Martínez Ocasio was then joined onstage by his inclusive 20-member dance crew to perform other bangers such as “Party,” “La Corriente,” and “Neverita,” which he fused with EDM versions of his tracks “Ni Bien Ni Mal,” “200 Mph,” “La Romana,” “Estamos Bien,” “Otra Noche en Miami” and “Chambea.”

After a very hyped performance of his dembow “Titi Me Pregunto,” Bunny was joined onstage by longtime collaborator Jhayco to perform their singles “Tarot” and “Dakiti.”

“I had an amazing summer in Puerto Rico,” Bunny told the crowd, “I hope my music is part of yours.”

He then performed “Yonaguni” and “Callaita” before surprising his loyal fans with the ultimate “Trap Bunny” set, including “Diles,” “No Te Hagas,” “Vuelve,” “Tu no metes cabra,” “Chambea” and “Soy Peor.”

“For my fans since day one, from ‘Diles’ to ‘Un Verano Sin Ti,’ thank you. This all started as a dream for me and now I’m selling out stadiums,” he said.

One of the most notable parts of the show was when the artist hopped on a floating island that took him around the Hard Rock Stadium, filled with about 60,000 spectators. There, he performed the very heartfelt bops “Un Coco” and “La Cancion.”

After a two-hour presentation, Bunny topped off the night with his feel-good reggae “Me Fui de Vacaciones,” the romantic “Ojitos Lindos,” the very prideful “El Apagón,” and his fast-paced mambo “Despues de la Playa.”