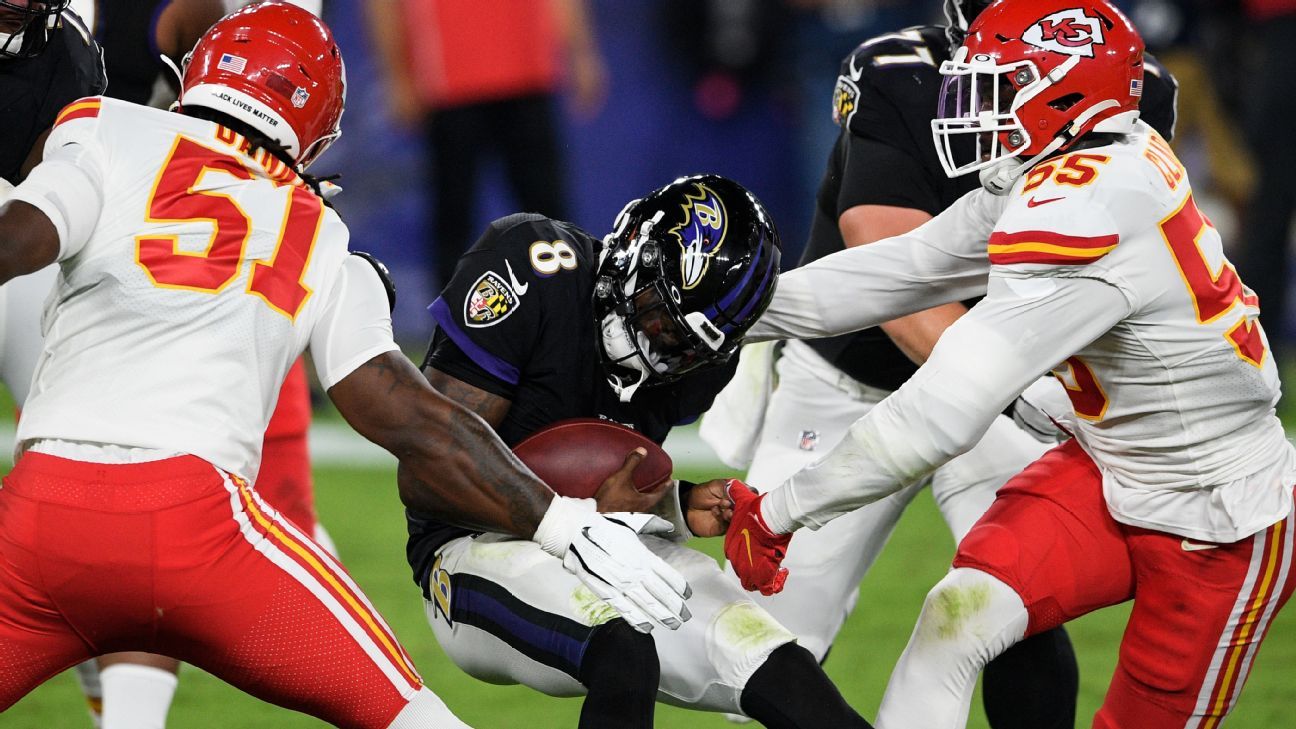 BALTIMORE — Lamar Jackson and the Baltimore Ravens stumbled against the Kansas City Chiefs once again, losing 34-20 on Monday Night Football in a game that ended their 14-game regular-season winning streak and left them feeling stripped of their cape.

Asked how the Ravens can get over the hurdle of beating the Chiefs, Jackson interjected by saying: “Our kryptonite.”

Jackson fell to 0-3 against the Chiefs after passing for a career-worst 97 yards. He’s 21-1 against the rest of the NFL in the regular season.

The reigning NFL MVP, Jackson has completed 67% of his passes against the other 31 teams with a 72.9 Total QBR. Against Kansas City, he has connected on 53% of his throws with a 58.5 QBR.

The Chiefs kept Jackson off his game by blitzing him on 35% of his dropbacks, compared to 29% by all other teams, according to ESPN Stats & Information research.

“It looked like the same thing from the Tennessee game [2019 divisional playoff] to be honest — that’s all,” Jackson said.

The Ravens (2-1) had been the hottest team in the NFL entering Monday. They hadn’t lost a regular-season game in almost a full calendar year (their previous defeat was Sept. 29, 2019, to the Browns). Baltimore had led at halftime in 11 straight games and hadn’t trailed in the second half at any point in 13 consecutive games.

But Patrick Mahomes and the Chiefs scored touchdowns on four of their first five drives to jump out to a 27-10 lead in the second quarter. Baltimore closed to within 27-20 in the fourth quarter, but Kansas City responded with a 2-yard touchdown pass to left tackle Eric Fisher to seal the victory.

“I’m really looking forward to earning the right to try to face them again,” Ravens defensive end Calais Campbell said. “I’m very confident if we played the game that we’re supposed to, we can hang with those guys.”

Even though it’s Week 3, this loss could have ramifications for the Ravens in January. Baltimore’s chances for capturing the No. 1 seed and home-field advantage in the playoffs dropped to 35%, while Kansas City’s chances increased to 43%.

Now, the Ravens have to wonder what it’s going to take to beat the Chiefs if they meet them in the postseason.

“They beat us. They out-executed us. They out-game-planned us. They just beat us,” Ravens coach John Harbaugh said. “That’s the story tonight. Big-picture stuff, all of that, I don’t know. They’re better, obviously. They’re a better football team at this point in time.”

The Ravens slipped out of first place in the AFC North for the first time since Week 15 of 2018, moving behind the Pittsburgh Steelers (3-0). That ended a streak of 21 weeks of holding at least a share of the lead in the division.