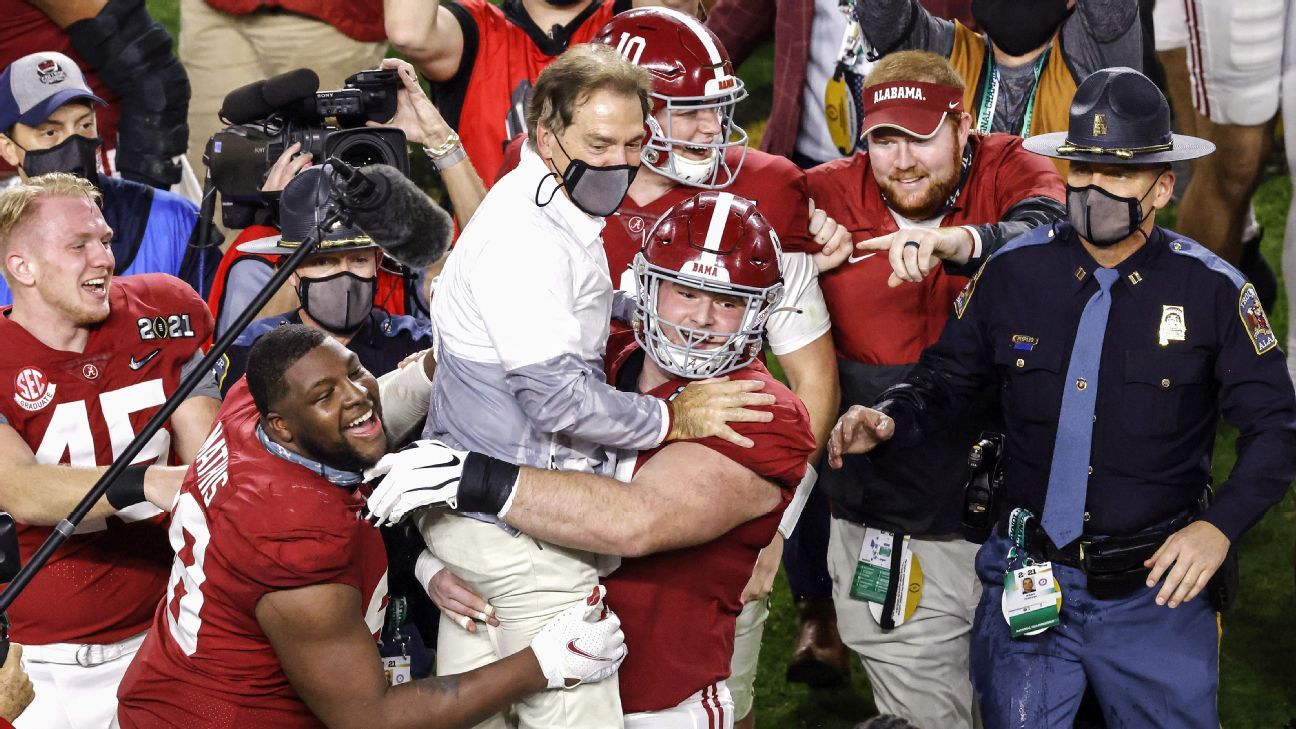 There might have been plenty of off-field changes in college football this offseason, from players profiting off their name, image and likeness for the first time to the impending moves of Oklahoma and Texas from the Big 12 to the SEC.

But if you believe the 65 coaches who voted in the preseason coaches’ poll, not much is going to change on the field in 2021.

Alabama, Clemson and Ohio State are ranked in the top four for the second straight season in the preseason coaches’ poll released on Tuesday, although their order has slightly changed.

The Crimson Tide, who will be seeking their seventh national title under coach Nick Saban, were an overwhelming choice for No. 1 with 63 votes, followed by Clemson, Oklahoma, Ohio State and Georgia. The Sooners received the other two first-place votes.

The lofty expectations are nothing new for Alabama, which has been ranked No. 3 or higher in each of the past 12 preseason coaches’ polls. In fact, last season was only the second time it was ranked outside the top two since 2010. The Tide were No. 3 behind Clemson and Ohio State but finished 13-0 after defeating the Buckeyes 52-24 in the College Football Playoff National Championship. The Tide also were No. 3 in the preseason coaches’ poll in 2015, when they defeated Clemson 45-40 in the CFP National Championship.

Of course, Alabama will have to replace many of the star players who helped it win its fifth national championship in the previous 10 years. Six former Tide players were chosen in the first round of the NFL draft in April, including Heisman Trophy winner DeVonta Smith, quarterback Mac Jones and tailback Najee Harris. Offensive coordinator Steve Sarkisian also left to become Texas’ head coach; Saban replaced him with former Houston Texans coach Bill O’Brien.

“The penalty for success when you win a national championship is you won because you had a whole lot of good players,” Saban said at last month’s SEC media days. “They were well-coached, so you had a lot of good coaches. When you lose some of those players, and we lost six first-round draft picks and 10 guys overall in the draft, and you lose some of those coaches to better opportunities, the challenge is you’ve got to rebuild with a lot of new players who will be younger, have new roles, less experience, and how do they respond to these new roles? That’s why rebuilding is a tremendous challenge. That’s why it’s very difficult to repeat.”

Nonetheless, the Crimson Tide are expected to bring back nine starters on defense, and projected starter Bryce Young was ranked the No. 1 dual-threat quarterback prospect in the 2020 ESPN 300. Alabama opens the season on Sept. 4 against No. 16 Miami (3:30 p.m. ET, ABC) at Mercedes-Benz Stadium in Atlanta.

Clemson and Ohio State also will have new quarterbacks, after losing Trevor Lawrence, the No. 1 pick by the Jaguars, and Justin Fields, the No. 11 pick by the Bears, respectively. The Tigers might be better equipped to replace Lawrence; D.J. Uiagalelei threw for 914 yards with five touchdowns and no interceptions and started two games when Lawrence was sidelined with COVID-19 last season.

The Tigers open the season on Sept. 4 against Georgia (7:30 p.m. ET, ABC) in Charlotte, North Carolina. The Bulldogs, who haven’t won a national championship in 41 years, bring back quarterback JT Daniels and six other starters on offense. Much of the defense will have to be replaced, however, especially in the secondary.

Oklahoma also will try to end a national championship drought — it last won it all in 2000. The Sooners are expected to return seven starters on both sides of the ball, and coach Lincoln Riley added several key transfers to help.

Texas A&M is No. 6 in the poll, followed by Notre Dame, Iowa State, North Carolina and Cincinnati, which is the highest-ranked team from a Group of 5 conference.

The Big Ten had five teams ranked, the Big 12 had four, and the Pac-12 and ACC each had three.