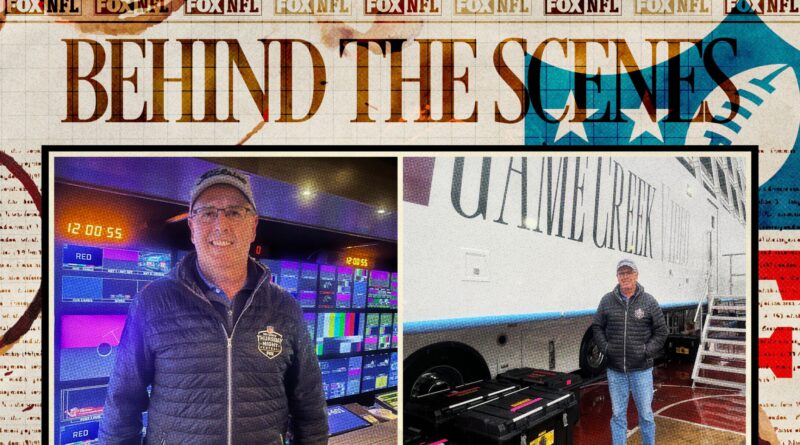 Editor’s Note: Richie Zyontz has been an NFL producer for FOX since 1994 and the lead producer for the last 20 seasons. He has more than 40 years of experience covering the league and has produced six Super Bowls. Throughout the 2022 NFL season, he will provide an inside look as FOX’s new No. 1 NFL team makes its journey toward Super Bowl LVII.

For anyone interested in driving from Philadelphia to Santa Clara, California, it’s a mere 2,900 miles as the crow flies. If you’re in a hurry and drink lots of coffee, you can make it in 43 hours, assuming you’re compliant with speed limits.

And we at FOX Sports have Ike to thank for that information.

President Dwight D. Eisenhower‘s Interstate Highway Act of 1956 helped build our nation’s major thoroughfares. I think it’s fair to say it made our country whole, allowing people and products to move efficiently and speedily throughout this vast country for many decades.

One group vital to our operation, a group that spends a lot of time on Ike’s highways, is our crew of truck drivers who steer the television mobile units from game to game.

This week, they were the ones cruising from The City of Brotherly Love to the heart of California’s Silicon Valley.

King of the road

Our lead driver is Jim Gove, a golf-loving native of New Hampshire now residing in Wrens, Georgia, 30 miles west of Augusta. He works with a team of five other drivers overseeing three large mobile units. Jim works for Game Creek Video and has been part of our crew for eight years.

Jim Gove of Game Creek Video, one of those responsible for driving the FOX Sports trucks from game to game. (Photo courtesy of Richie Zyontz)

While covering FOX’s top game is an honor for most of us, the schedule often doesn’t make geographic sense. We’re often on the East Coast one week, the West Coast the next. We generally follow the best teams and collect frequent-flyer miles along the way.

For the guys hauling these big rigs around, the schedule can be a burden.

With two drivers per truck, it’s 10 hours on, 10 hours off, with the off time spent in the small bed in the rear of the cab. The accommodations aren’t exactly up to Ritz Carlton standards, and sleep doesn’t come easily.

And Ike’s beloved highways are occasionally either under construction or badly in need of repair. This is not an easy job. As someone who can’t parallel park, I’m in awe of how anyone can maneuver these behemoths.

Sleeping accommodations in the trucks, complete with a proud emblem from Octobers past. (Photo courtesy of Richie Zyontz)

But as always, our trucks arrived safely in California by Wednesday afternoon and were up and running by Friday.

Jim and his crew performed the first step in the process of broadcasting this game.

I never take their role for granted!

Tom Brady grew up in San Mateo, California. That’s a 30-minute drive from Levi’s Stadium in Santa Clara, and a stone’s throw from Candlestick Park where he rooted on his beloved 49ers.

With all the glory Brady has achieved in his legendary 23-year career, this was only his second visit to play in the San Francisco area. And after our video chat with him, it was evident it had special meaning.

Speaking from the training room at the Bucs’ practice facility, where his personal trainer Alex Guerrero was massaging his Hall of Fame arm, Brady nostalgically described his boyhood playing football in the streets, the love of his parents and rooting for his childhood hero, Joe Montana.

This conversation revealed Brady to be down to earth, funny and profane — in my mind, all admirable qualities. It was a private look at a very public person.

A tale of two quarterbacks

Unfortunately, the public Brady on display Sunday at Levi’s Stadium suffered through an unhappy homecoming. Playing before 100 guests, including his parents, he was constantly hurried and harried by the stout San Francisco defense.

Our cameras picked up Brady slamming his hand into a defender’s helmet on a pass attempt, causing him visible discomfort. Many of his passes were inaccurate.

The wonderful Brady storyline yielded the spotlight to the rookie quarterback in red across the field, San Francisco’s Brock Purdy.

Thrust into action last week after an injury to starting quarterback Jimmy Garoppolo, Purdy was making his first career start. Oh, and by the way, it came against Brady, who was leading the Patriots before Brock had celebrated his first birthday.

We were told by 49ers coach Kyle Shanahan that the young quarterback had moxie.

On our video call with Purdy, it showed. He was confident, almost cocky, but in a good way. It seemed he was ready for his closeup (although this movie was directed by Rich Russo, not Cecil B. DeMille — “Sunset Boulevard” reference for you kids).

“I have so much help around me”

Brock Purdy talks to Erin Andrews about how much the 49ers’ veterans helped him in his first career start.

And what a game he had!

Playing like a seasoned pro, Purdy led the 49ers to four touchdowns in the first half, turning the game into a rout. Our camera crew had timely reactions from the Purdy family watching from the stands.

Our low end-zone camera maestro Andy Mitchell captured his dad, Shawn Purdy, with tears of joy flowing freely. It was the shot of the day!

The game was never in doubt as San Francisco rolled to a 35-7 victory.  But at least one storyline played out to perfection as the kid beat the legend.

Oh, yeah, one other storyline didn’t quite work out either.

After their 2,900-mile drive this past week to the West Coast, Jim and the truck drivers need to saddle up and head back across the country to Jacksonville, Florida, where the Jaguars host the Cowboys next week.

So, if you find yourself on Interstate 10 in the next few days, and you see those Game Creek trucks rolling down the highway, give the boys a wave.