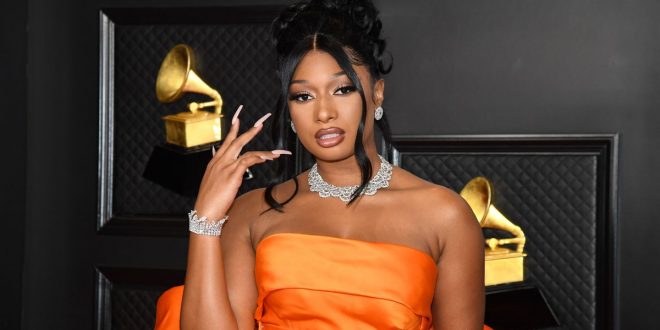 Taking the stage at her first-ever Grammy Awards, Megan Thee Stallion was at a loss for words accepting her award for Best New Artist at the 63rd annual ceremony tonight (March 14). This was her second win — the first being Best Rap Performance for her “Savage” remix with Beyoncé — but when three-time Grammy winner Lizzo announced the Houston rapper’s victory outside Los Angeles’s Staples Center, it was time to soak it all in.

“I don’t want to cry,” Megan, who’s nominated for four awards total, said after a few long moments of silence behind the microphone. She went on to applaud her fellow Best New Artist nominees for being “so amazing”: Ingrid Andress, Phoebe Bridgers, Chika, Noah Cyrus, D Smoke, Doja Cat, and Kaytranada.

“I really want to say thank you to my mama,” she later added. “She’s not here with me today, but I know she [is] here with me in spirit, and she always believed I could do it, so thank you all so much.”

Megan Thee Stallion’s mom — Holly Thomas, a rapper known as “Holly-Wood” — died in 2019 after decades of helping her daughter do what she loves most. Though “Savage” is the song that catapulted her to stardom via TikTok, with this win, it’s clear Megan Thee Stallion has many more hits to write. Ahead of the show on the red carpet with E!, she gave her fans, a.k.a. Hotties, a quick tease of big things to come: “I will say y’all just better be ready for Hot Girl Summer part two.”

You heard her. Prepare yourself!