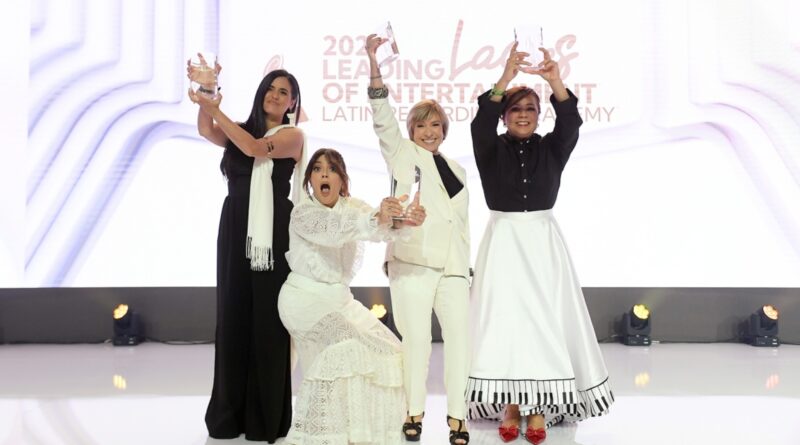 The event took place Tuesday (Nov. 15) ahead of the annual Latin Grammy Awards.

The Latin Recording Academy honored and celebrated this year’s Leading Latin Ladies during an intimate luncheon on Tuesday (Nov. 15) that officially kicked off Latin Grammys week.

Hosted by Gloria “Goyo” Martínez, the emotional event offered a space for both women and men in the industry to applaud the contributions made by the honorees, which included singer-songwriter Kany García; pianist, arranger and musical director Janina Rosado; Amazon Music’s global head of Latin music Roció Guerrero; and Rosa Lagarrigue, CEO of artist management company RLM.

The nearly three-hour ceremony included moving speeches by the honorees who were presented with the award by their mentors, fellow recording artists or executives who’ve supported them along the way.

Rebeca Leon, who was part of the Leading Latin Ladies class of 2017, was the first to take the stage to present the award to Guerrero for her strides in Latin music and for pioneering the first-ever Latin playlist: Spotify’s Baila Reggaeton.

Other executives who took the stage were Afo Verde, chairman/CEO of Sony Music Latin-Iberia, who, along with Sony Music Latin Puerto Rico’s VP, Tuti Bou, presented García. “Kany is intelligent, talented, and I have the honor of working with her for a long time. She defends her flags, opens many roads, and gives voice to the voiceless,” he expressed. Meanwhile, merengue icon Milly Quezada introduced Rosado and Spanish artist Ana Torroja took the stage to present the award to her longtime manager Lagarrigue.

Launched in 2016, the Academy’s Leading Latin Ladies initiative was created to honor and recognize “professional and socially-conscious women within the arts and entertainment fields who have made significant contributions and inspired the next generation of female leaders,” according to the Academy.

The 2022 Latin Grammy Awards ceremony is taking place Thursday (Nov. 17) live from the Michelob Ultra Arena at Mandalay Bay Resort and Casino in Las Vegas. The telecast will air on Univision at 8 p.m. ET, and it will also be available on HBO Max.

Below, check out five best moments from the luncheon:

Rocío Guerrero on her message to the next generation of female leaders: “This is a responsibility I don’t take lightly,” she started her speech. “To the new generations of girls and young women that will be our future: I hope you grow up understanding that anything is possible with hard work, risk taking, ambition and ethics. I mean each of those things. No matter what you look or sound like, you can do it. I hope you can see yourself in women like us. I hope we can be a reminder that there are no limits to your growth.”

Kany García on becoming her own role model: “Why am I shaking? It’s easier to sing than to do this speech,” the “Aguita e coco” singer joked. “Since I was little I’ve felt different and I’m not talking about that moment when you feel ‘special’ but when you feel like you don’t fit anywhere. They told me so many things about my voice, so many no’s accumulated that they made me a woman who was scared and filled with insecurities. I remember that little girl who never found a woman on television who represented her. A woman who didn’t have shake her hips or a woman who liked women but also liked wearing high heels, dresses and putting on makeup. Not the typical stereotype of the women in my community who is supposed to be the opposite of that. So, I had to become my own role model. I owe this to my younger self, who struggled so much to feel represented.”

Janina Rosado on not being mediocre: “I have to start by thanking God because He wanted me to be here and for me to be a musician and to be born into a family where music was our language. We only spoke about music,” Rosado, who’s produced for artists such as Juan Luis Guerra, said. “I come from a family that marked me. They gave me the confidence and my father would tell me, ‘You can do it. Don’t be mediocre. If you’re going to go to school and study, you can’t expect to pass by with mediocre grades. You have to put in all your effort to everything you do.” Which is what I have always done, and it’s gotten me here.”

Rosa Lagarrigue on being an optimist: “I’m so emotional,” said Lagarrigue, who’s managed the careers of artists like Alejandro Sanz and Miguel Bosé, to name a few. “After working in the music industry for 44 years, I feel so proud to be recognized. We’re still missing many women in relevant positions, but I’m an optimist. I want to especially point out the good relationships there are between us and a sort of complicity. We will achieve to fill in those positions. We should give opportunities to women, to diversity and young people.”