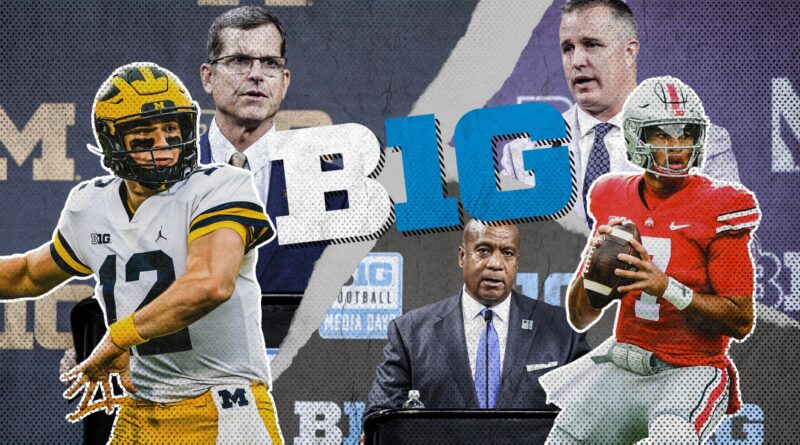 INDIANAPOLIS — A year ago, C.J. Stroud hadn’t even thrown a college pass, or officially been named Ohio State‘s starting quarterback (even though it was widely believed he would be the guy in Columbus).

Then he went on to become a Heisman Trophy finalist, lead Ohio State to the Rose Bowl and take charge of the best offense in the country as a freshman. The Buckeyes were ranked No. 1 in total offense (561.5 yards per game) and scoring offense (45.7 PPG) last year, and Stroud passed for 4,435 yards with 44 touchdowns to just six interceptions. He finished second nationally in passer efficiency rating (186.6) and broke 17 program records.

And yet, as fall camp is set to begin next week, Stroud said he doesn’t really think he was successful last year.

“I don’t think I did a lot,” he said this week at Big Ten media days. “I feel like I’ve barely touched my potential. I feel like I can do a lot more … There’s always room for improvement. I look at Tom Brady and his mindset. He comes back every year with something to prove that he has to do better.

“And I respect that because, I mean, it’s a fight. It’s a challenge every day. It’s not easy to do. It’s not easy to get up. Everybody pats you on the back for simple stuff, stuff I’m supposed to do — which I appreciate, but I don’t need that. I don’t pat myself on the back. I think I’m my biggest critic.”

C.J. Stroud will win the Heisman, and Jack Sawyer will have a breakout year

RJ Young explains why he believes Ohio State Buckeyes quarterback C.J. Stroud will win the Heisman Trophy this season, due in part to the incredible amount of talent surrounding him in Tre Henderson and Jaxon Smith-Njigba.

Stroud, just 20 years old, was incredibly comfortable and relaxed at his first media days. He spoke with reporters for an hour, joked around about NCAA Football video game ratings and talked about his passion for cooking. His mom taught him how to cook when he was younger, and he enjoys whipping up a soul food dinner for his teammates at least once a week. His favorite menu features mac ‘n’ cheese, fried chicken and waffles.

While Stroud’s declaration about not accomplishing much last year prompted many follow-up questions — almost as many as “What’s in that mac ‘n’ cheese recipe?” — coach Ryan Day said he wasn’t surprised by such comments.

“That’s the way he is,” Day said. “He is very driven. He wants it really bad. He’s very competitive, but he’s a very good leader. I think in the offseason, he recognized that it takes everybody [to win], and that comes with maturity. And he’s done an excellent job of that.

“But to say he accomplished nothing last year — that’s not accurate. But that’s his approach, and I think that’s what makes him great. And I respect that about him. He did a lot of great things last year, but I think his best football is ahead of him.”

Stroud clarified later that he doesn’t feel a need to prove anything. But he does want to show more of what he can do, such as running the ball, mainly because his friends from home gave him a hard time for rushing for minus-20 yards last season. He also mentioned improving his game-management skills.

Even so, Day said Stroud has “really had an edge” this offseason and has become even more of a team leader.

“He’s always had a voice,” Day said. “Once you go on the field and you show credibility that you can do it, you walk a little differently, and guys look at you through a different lens. I think that’s been the case.

“I think when you’re young, and you go into a season, and you haven’t played, you’re just trying to figure out a way to complete that first pass, get that first win, and you’re so focused on your job and maybe the offense.”

Jim Harbaugh would like you to play into his quarterback battle mind games and question what you think you know about who will start at Michigan in Week 1 against Colorado State.

Last year, Cade McNamara led Michigan to a win over Ohio State, a Big Ten title and the College Football Playoff. But he enters his senior season with the added pressure of proving why he should keep his job. That’s because sophomore J.J. McCarthy, a former five-star prospect who is recovering from a shoulder injury, had been widely thought to overtake McNamara as a true freshman, but it didn’t happen.

While he might be irritated by the constant questioning and the fact that he hasn’t officially locked up his spot yet, McNamara maturely answered questions on the topic at media days.

“I think no matter what position you’re in, if you become complacent, you become vulnerable,” he said. “I think this whole, entire situation has really helped me in that sense that I have zero complacency as to what my situation is and where I am on the depth chart. If anything, I’m getting better and faster than me just sitting in the quarterback room comfortably.”

This prompted further questioning about how McNamara has responded to entering fall camp without being told he’s the starter.

“Yeah, Cade is the starting quarterback,” Harbaugh said. “When we line up, first practice, he’s going to be with the first team. Now, eventually over training camp, J.J. will get the same opportunity that Cade will. They’re both going to get a ton of reps, and there will be time for them to have that competition and determine who the starting quarterback is for the first game.”

Harbaugh hopes the quarterback battle will be “competitive, not combative” and laid out the criteria that will determine who wins. This includes which quarterback can lead the team into the end zone. Harbaugh noted several times that McNamara did this on more than 50% of his drives last season.

Taking care of the football and limiting turnovers, playmaking ability and who performs best in the passing game are also things he’s examining.

“Put the balls out there on Aug. 3, and they’ll have at it,” Harbaugh said.

Is Michigan being disrespected after winning the Big Ten?

RJ Young discusses the Michigan Wolverines as they prepare to try to repeat as Big Ten Champions.

The subject, as it pertains to conference realignment and the College Football Playoff, has taken center stage across every conference media day extravaganza this month. This includes the Big Ten, which joined the Pac-12 and ACC last year in voting against a 12-team model after months of discussion. Now, in the wake of becoming even more powerful with the additions of USC and UCLA coming in 2024, commissioner Kevin Warren is more bullish.

The current four-team format ends when the CFP deal expires at the end of the 2025-26 season, which means there’s plenty of time for commissioners to come up with a new plan. Different ideas have been kicked around, including 12- and 16-team proposals.

Although, as Northwestern coach Pat Fitzgerald pointed out, it’s difficult to have any real playoff expansion discussion if you don’t know what the conferences will look like.

“If we have a Power 5, we can do it that way, but if we have a Power 4, Power 3 or a Power 2, that changes the landscape,” he said. “I’m not going to give an opinion until I know what landscape we’re talking about. So let’s figure it out, so we can get moving.

That last bit was a common sentiment from most Big Ten coaches this week, who sort of joked about how happy they are to be in this conference at a time such as this.

Warren wants the Big Ten to lead the way in all aspects of change in college athletics. He wants his conference to “transform and be transformative.” And he wants to make decisions that, “when we look back 30 years from now, people will say that the Big Ten Conference was ahead of the curve in making these decisions.”

An early example is that once USC and UCLA are members, the Big Ten will have a presence from coast to coast and in the country’s three largest markets: New York, Los Angeles and Chicago.

Warren vowed to be bold and aggressive when it comes to the many issues facing college sports, including realignment and expansion. Could the Big Ten add more schools? He says those kinds of potential moves and future decisions “will be done for the right reasons at the right time.”

“It is important for all of us in business to recognize that we’re in a time of change,” Warren added. “I think there’s two types of people in the world: They look at change as a problem, or they look at change as an opportunity. I’m one of those individuals that, when change occurs, I get excited about it. It’s really an opportunity for us to do a lot of things that people have thought about but maybe been a little reticent to do.

Laken Litman covers college football, college basketball and soccer for FOX Sports. She previously covered college football, college basketball, the U.S. Women’s National Soccer Team and the Olympics at Sports Illustrated, USA Today and The Indianapolis Star. Her first book, written in partnership with Rizzoli and Sports Illustrated and titled “Strong Like a Woman,” was published in spring 2022 marking the 50th anniversary of Title IX.