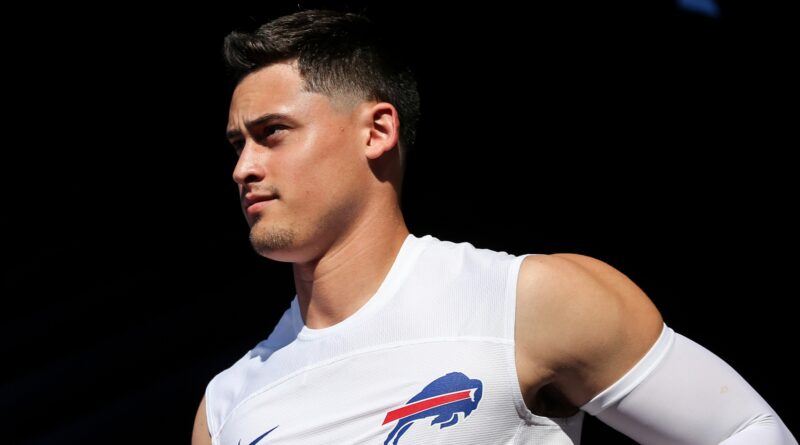 Warning: This story contains information that might be sensitive to readers.

Matt Araiza, who led San Diego State to a record-setting season before being drafted by the Buffalo Bills, and two of his former Aztecs teammates were accused in a civil lawsuit Thursday of gang-raping a teenager at an off-campus party last fall.

On Saturday, the Bills released the rookie punter.

The lawsuit, filed in San Diego County Superior Court, accuses Araiza, Zavier Leonard and Nowlin “Pa’a” Ewaliko of gang-raping a then-17-year-old girl at a Halloween party at a home where Araiza had been living.

The plaintiff, now 18, is identified in the complaint as “Jane Doe” because she was underage at the time.

No arrests have been made and San Diego Police have not publicly identified any suspects.

A person familiar with the case told the AP the Bills were not aware of the allegations against Araiza in April. The person spoke on condition of anonymity because the team had not commented publicly about the allegations.

Executives from two different teams told the AP they became aware of Araiza’s involvement in an incident during the draft process, but neither person knew the extent of the allegations.

After the Bills declined multiple requests for comment on Friday, coach Sean McDermott was clearly shaken when he addressed the situation following a 21-0 preseason loss at Carolina.

“It’s a situation that’s extremely serious. Just hard to go through. It’s not a situation that I or we take lightly whatsoever,” he said. “I can tell you this my heart, my thoughts and prayers go out to the people involved. And that includes Matt. It includes both sides here. The victim and everyone involved.”

McDermott said he was surprised and shocked by some of the revelations that have come out over the past day, and repeatedly stressed the team has work to do. Asked what work needed to be done, he answered by saying: “It’s just a matter of trying to find the truth at the end of the day.”

McDermott said it was his decision to not have Araiza play, saying he felt it was not the right thing to do. While he said Araiza would travel back with the team, McDermott declined to answer a question on Araiza’s status on the roster.

Previously, the Bills’ only comment on the lawsuit came a day earlier in saying they were aware of the allegations and had conducted their own investigation.

“The facts of the incident are not what they are portrayed in the lawsuit or in the press,” Araiza said in a statement released through his agent, Joe Linta. “I look forward to quickly setting the record straight.”

The lawsuit states that the teen had been drinking with friends when they decided to go to the party on Oct. 17 and she was “observably intoxicated upon arrival.” She became separated from her friends and was approached by Araiza who offered her a drink, according to the lawsuit. She believes the drink “not only contained alcohol, but other intoxicating substances,” the complaint said.

She told Araiza, who was 21 at the time, that she was a high school senior, according to the lawsuit. She alleges he then led her to a side yard where he asked her to perform oral sex and then had sex with her before taking her to a bedroom in the home. There were at least three other men in the room, including Leonard and Ewaliko, according to the complaint. The lawsuit states that Araiza threw the teen onto the bed and she went in and out of consciousness while she was being raped. It added, “but she does remember some moments from the horrific gang rape.”

After an hour-and-a-half, the teen “stumbled out of the room bloody and crying,” according to the complaint. Her nose, belly button, and ear piercings had been pulled out.

She immediately told her friends about the rape and the next day reported it to police and underwent a rape exam, according to the lawsuit. Officers coached her on calling Araiza, which she did 10 days later as detectives recorded it, according to the complaint.

During the call, Araiza confirmed having sex with her, the lawsuit states, but when she asked him “And did we have actual sex?” he responded “This is Matt Araiza. I don’t remember anything that happened that night,” and hung up.

“This was a horrific crime, the kind of which happens all too often,” attorney Dan Gilleon said in a statement to the AP. Gilleon said this case is especially egregious because it not only involved “self-entitled athletes,” but multiple organizations from the university to the Buffalo Bills “have acted the part of enablers looking the other way in denial that my client deserves justice even if the defendants are prized athletes.”

Attorney Kerry Armstrong, who represents Araiza in the criminal investigation, called the allegations untrue based on the findings of an investigator he hired.

“I 100% do not believe that he ever forcibly raped this girl or had sex with her while she was passed out or drunk or anything like that,” Armstrong told the AP. “It’s unfortunate that she’s filed a civil suit. I think it’s a cash grab.”

Armstrong said the Bills were aware of the allegations and investigation of Araiza before the lawsuit was filed because he provided the team updates since he was retained by the punter about six weeks ago.

“Matt Araiza’s very upset about this, as you can imagine. He’s very disappointed,” Armstrong said. “But he’s going to get his day in court eventually.”

Armstrong said he’s been informed police have all but completed their criminal investigation, which will then be reviewed by the district attorney to determine whether to file charges.

Marc Xavier Carlos, who is representing Ewaliko in an ongoing criminal investigation, and Jamahl Kersey, representing Leonard, told the Times they could not comment.