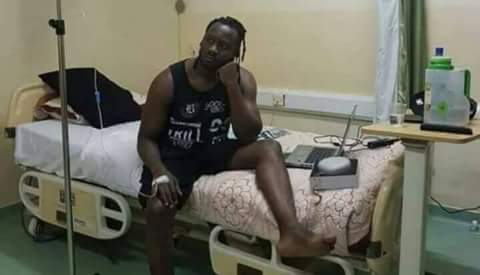 After receiving a couple of bottles and stones last night forcing him offstage, Gagamel boss Bebe Cool has come out to speak about the incident that happened on his birthday eve.

Bebe Cool says he was beaten because of Bobi Wine who is faking things. According to Bebe, Bobi Wine did not get any wounds as he said. He also revealed that he wanted to stay in stage so that he could receive a million bottles thrown at him before security pulled him off.

“He spent there a week, did he come out with any wound” Bebe Asked.

He added that no wound can heal in a week.

Bebe Cool warned the public that they had started something they didn’t know.

“If you have started the battle, let’s face off” angry Bebe Cool said.

He also advised Ugandans to let him be regardless of his ideology.

He however revealed that Bobi Wine who is currently abroad did not go for treatment but some other things he did not reveal.

He said all this shortly after the concert.

Word has it that some people are not angry at Bebe Cool but his language. He was recently quoted referring to Bobi Wine as a drug addict and throwing more insults, a thing that fuelled Bobi Fans’ anger.

Listen To Bebe in the video below