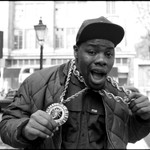 Biz Markie Mourned by Al Sharpton & More at NYC Memorial Service: ‘He Was More Than Just a Friend’

The New York MC, born Marcel Theo Hall, died July 16 at age 57. He was hospitalized in April 2020 because of diabetes complications and reportedly suffered a stroke while in a diabetic coma last year as well.

Al B. Sure! also spoke about the song and how Biz originally reached out to him and fellow R&B singer Keith Sweat to sing the iconic hook. “But I believe in Marcel’s case, nobody — and I mean nobody — could have rocked the chorus like the iconic, charismatic, signature Biz Markie,” he argued during his speech.