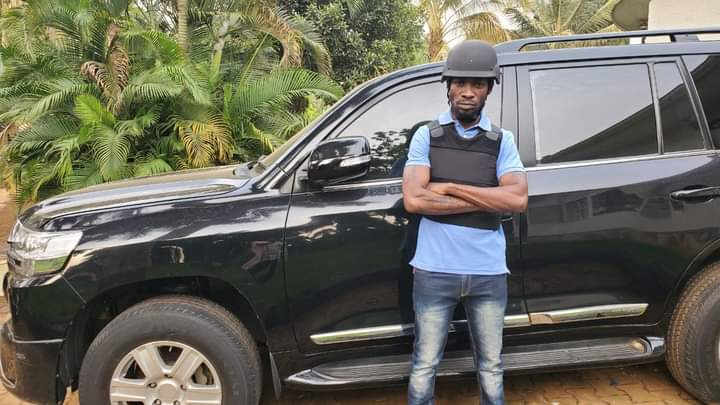 Bobi Wine has today morning received a bullet proof vehicle from the National Unity Platform(NUP) political party members and supporters in the diaspora.

The party president could not hold his excitement as he took onto his social media to thank all those that contributed to this achievement.

Below is what he had to say;

A THANK YOU NOTE !

Let me take this opportunity to appreciate all friends in Uganda and abroad who have continued to support us in this struggle for freedom and democracy.

On behalf of the National Unity Platform, I would love to thank all comrades here and abroad who supported our campaign financially, to a point that we never lacked anything on the campaign trail. Some Ugandans gave as little as 500 shillings, as testament for their commitment to the cause. There are some friends who deposited money at petrol stations so that our vehicles never lacked fuel. THANK YOU.

Some Ugandans took it upon themselves to raise funds which supported our polling agents and supervisors countrywide. THANK YOU

From the time we were attacked with live bullets on the campaign trail and particularly when a projectile hit Dan Magic smashing his face, many Ugandans out of concern sent me bullet proof vests and ballistic helmets, which I put on throughout the campaign period, and gave others to comrades. Indeed, if I did not have one on in Masaka, the story would be different. THANK YOU

There is another group of comrades who kick-started a fundraising campaign for a bullet proof vehicle. These comrades informed me of their plan, but I thought it was an uphill task, given how expensive it is. A few weeks ago, these comrades surprised me when they informed me that they had succeeded in raising enough money for the vehicle, and here it is. I can’t THANK YOU enough.

There are those who have continued to support the efforts of our Secretariat in reaching out to the families of injured comrades, as well as those who are in prisons. You comrades continue to lift the burden off our shoulders, and for this WE ARE GRATEFUL.

Contrary to what Gen. Museveni and his spin-masters love to say, this struggle to-date continues to be supported by Ugandans here and abroad. We are very, very grateful. Without your effort and support, we would never have been able to come this far.