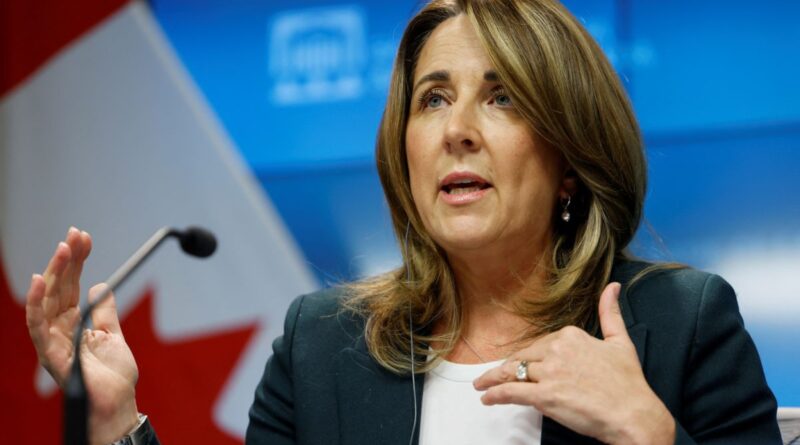 Bank of Canada senior deputy governor Carolyn Rogers says the central bank intends to keep pushing borrowing costs higher and that a period of lower economic growth is necessary to bring inflation back under control.

Speaking to Calgary Economic Development on Thursday, Ms. Rogers warned that the economy is still overheating and price pressures are broadening. She said getting inflation back to the central bank’s 2-per-cent target will be a long process with potential “bumps along the way.”

She was speaking a day after the central bank increased its benchmark interest rate by 0.75 of a percentage point, its fifth hike since March. This brought the overnight rate to 3.25 per cent, a restrictive level that will see borrowing costs weighing on economic growth.

“Our primary focus will be to judge how monetary policy is working to slow demand, how fast supply challenges are resolved and, most importantly, how both inflation and inflation expectations respond,” she said in her second speech since taking over the bank’s No. 2 job.

Financial markets and most private-sector forecasters expect an end-point for the central bank’s rate hike cycle of between 3.5 per cent and 4 per cent.

“The speech made clear that the lags in monetary policy mean that central bankers are flying blind when it comes to how high rates need to rise,” wrote Royce Mendes, head of macro strategy at Desjardins, in a note to clients. “That said, if monetary policymakers have to make a choice between a recession and controlling inflation in the near-term, their actions will be guided by the latter.”

Higher interest rates, which make it more expensive for individuals and companies to borrow money, are already squeezing the Canadian economy – particularly rate-sensitive sectors such as housing. But Ms. Rogers cautioned that the economy remains in “excess demand,” where households and businesses want more goods, services and labour than the economy can supply.

“Because we are in a period of excess demand, we need a period of lower growth to balance things out and bring demand back in line with supply,” she said.

“The longer inflation remains well above target, the greater the risk that the public sees higher inflation as the norm,” Mr. Powell said. “History cautions strongly against prematurely loosening policy.”

Both the Bank of Canada and the Fed are trying to engineer a so-called soft landing, in which inflation comes down without causing a recession or a spike in unemployment. Ms. Rogers acknowledged that the persistence of high inflation makes that task more challenging.

“Is that path a delicate balance? Absolutely,” she said in a news conference after her speech. A key factor in achieving that soft landing is keeping Canadians’ inflation expectations under control.

“The scenario that we’re worried about is that Canadians look at the current rate of inflation, they think it’s here to stay, they start incorporating that thinking into long-term decision making,” she said. “Certainly if that starts to occur, it makes inflation much harder to get down. It means monetary policy has to do more, rates have to go higher, to get inflation down.”

Much of the speech focused on the uncertainty surrounding inflation. Some of the global forces that pushed up consumer prices over the past year – including elevated energy prices and shipping costs – have begun to normalize. That has helped lower headline inflation; the annual rate of Consumer Price Index growth dipped to 7.6 per cent in July from a four-decade high of 8.1 per cent in June, largely as a result of falling oil prices.

But measures of core inflation, which strip out the more volatile elements of the Consumer Price Index such as food and gasoline, continue to push higher. Core inflation tends to be driven by domestic factors tied to the Canadian service sector and labour market. The job market in particular is increasingly adding to inflationary pressures, as the ultralow unemployment rate and high number of job vacancies push up wages.

“While it looks like we might have seen the peak of overall inflation in Canada, inflation excluding gasoline prices has continued to rise and broaden across goods and services. There are also some significant uncertainties, particularly in the global commodity markets, that could set us back,” Ms. Rogers said.

Your time is valuable. Have the Top Business Headlines newsletter conveniently delivered to your inbox in the morning or evening. Sign up today.