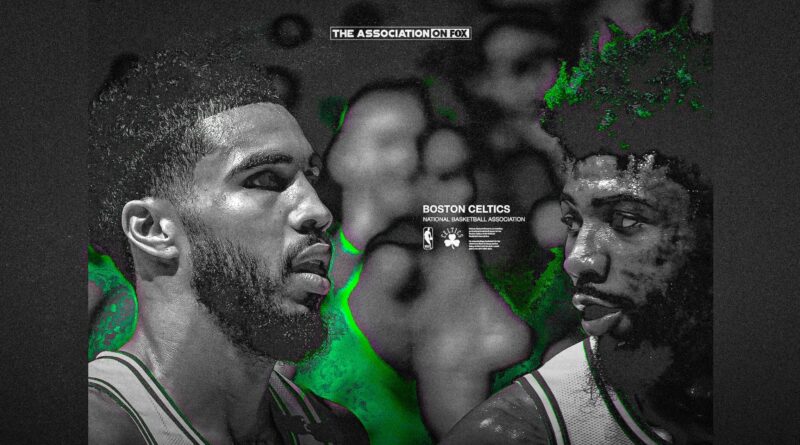 BOSTON — Marcus Smart left the media conference room and began to make his way through the underground hallways of TD Garden. His Celtics-green pants matched his Celtics-green hair, which was a little longer than it was when the playoffs started and Boston hadn’t yet lost the NBA Finals to the Warriors in six games.

The smell of cigar smoke from Golden State’s championship celebration and the distant whoops of its happy players hung in the air. Near Smart, however, the only sound was his sniffles.

The Defensive Player of the Year’s Celtics-green sneakers were embroidered with sequins, and they sparkled under the fluorescent lights as he shuffled along the carpet with a member of the team’s staff. Before Smart made his way out of the maze and toward the wider hallways where family and friends had gathered, he put on his sunglasses to hide the redness ringing his eyes.

Entering the public space once again, he still thought to hold the door for the person behind him.

Smart’s sparkly shoes were almost taunting after Boston’s 103-90 loss in Game 6. They were celebration shoes, shoes in which it almost feels silly to be sad, like crying while wearing a clown nose.

Those sneakers were what this Celtics team was at its best: brash, gritty and layered, with depth and smothering brightness that blinded opponents. This team started 19-21 and then, after Jan. 10, went 32-10. It ended the season with the second-best record in the Eastern Conference and the best defense in the league.

“We’ve been through hell to get here,” Smart said.

It’s true. These guys weren’t supposed to be here. They were not supposed to make it to the Finals under rookie head coach Ime Udoka, let alone appear as though they might win it all after they won Game 3 to take a 2-1 series lead.

But Boston didn’t blind anyone on Thursday. In fact, every player looked like a deer in the headlights, if deer could play hot potato with a basketball instead of driving to the rim. The team lacked the grit and confidence it had played with to get to this point. The Celtics were erratic, with flashes of former greatness, but they never sustained it or kicked into a higher gear.

Perhaps it was the lack of experience on the playoff stage, especially against a Warriors team that has been in the postseason together so many times. Perhaps it was the fact that no Celtics player had been to the Finals, so there was no one to right the ship when players started to get bogged down mentally.

Perhaps the team simply lacked the cohesion that it was previously able to stitch together with Band-Aids and whatever it was that held Robert Williams III knee together.

“They won, and we lost,” Jaylen Brown said after the game. “We did it to ourselves. We had the opportunity to go up and win, and I guess we showed our immaturity at times. And it stings. [We’re] still a young group, still got a lot to learn.

On Thursday, every Boston player seemed afraid to be the one to take shots. Every player except Al Horford, who played in 141 playoff games over 15 years before making it to the Finals. As the game slipped away, he sank 3s and made a monster block that (cruelly) kept some hope alive for Celtics fans.

But Horford couldn’t stop the others from looking sluggish and demoralized, and he couldn’t inspire the confidence his younger teammates needed to take critical shots. As a result, Boston players kept passing the ball to someone else until someone, eventually, turned it over.

As Udoka said after the game, “You could look at the box score and see if we won or lost based on a few things.”

Boston’s young superstar, Jayson Tatum, became the first player to notch 100 turnovers in a single postseason on Thursday. That’s not the kind of history anyone wants to make — especially not a player who has been hailed as The Guy. The same guy who made a buzzer-beating layup to take Game 1 in the first round against the Nets. The same guy who put up a 46-point, nine-rebound, four-assist performance in Game 6 against Milwaukee to send the series to a Game 7. The same guy who scored 31 to force another Game 7 against Miami in the conference finals.

That guy never really showed up in the Finals. He had a few good games but none that could count as a definitive Tatum Game and mark his undisputed arrival in the pantheon of legendary Finals performances.

But Tatum didn’t get the Celtics here alone. Far from it. On Thursday, Brown showed up to try to will the team to a win, putting up 31 points.

Still, he and Tatum each had five turnovers.

And all season, Smart was the beating heart of this team, leaving everything on the court as he stuck to opposing offenses like glue. Horford brought a level of experience — if ultimately not enough — that seemed to act as a comfort to the young team. Williams III played through pain, Grant Williams had a monster game when it counted in Game 7 against the Bucks, and Brown consistently proved why he and Tatum are Boston’s superstar future. Derrick White, Payton Pritchard and many others contributed to the Celtics’ success.

Going into these playoffs, lots of people talked about the first-round series against the Nets as though Boston had lost before it started. Kevin Durant was too big of a name and too big of a presence.

It turns out that a true squad is too much for any one player.

Game 6 of the Finals was, then, the ultimate example of Boston’s season. It was less the Warriors’ to clinch and more the Celtics’ to once again win with their backs against the wall — or lose.

And this time, instead of rising to the occasion, they got scared or psyched out. They seemed to lose trust in themselves. And because no one player could decisively win or lose the game, they all lost it together.

T.S. Eliot might as well have written his poem “The Hollow Men” about the 2022 Celtics: “This is the way the season ends, not with a bang but with a whimper.” Or at least it felt like that as the clock ticked down in the fourth quarter, with the Warriors’ lead building and Boston’s players looking like shells of themselves.

Afterward, Brown kept saying how bright the future is for Boston. But getting back to the Finals — through a healthy Bucks team, a healthy Heat team, a Nets team with a Durant who has a lot to prove and Joel Embiid’s Sixers — will be no easy task.

Let’s, however, choose optimism. These Celtics willed themselves to this point, and if Boston fans are lucky, they will do so again. They certainly have the talent. This might be the painful experience that keeps them hungry.

“You don’t want to feel like this again, but you want to get back here,” Tatum said after the game. “So, yeah, it’s going to fuel us.”

Maybe one day, Smart will wear those sparkly sneakers again to celebrate a championship. And maybe, rather than shrinking from the task, every player will clamor to be the one who ends the opposing team’s season with a bang.

Charlotte Wilder is a general columnist and cohost of “The People’s Sports Podcast” for FOX Sports. She’s honored to represent the constantly neglected Boston area in sports media, loves talking to sports fans about their feelings and is happiest eating a hotdog in a ballpark or nachos in a stadium. Follow her on Twitter @TheWilderThings.