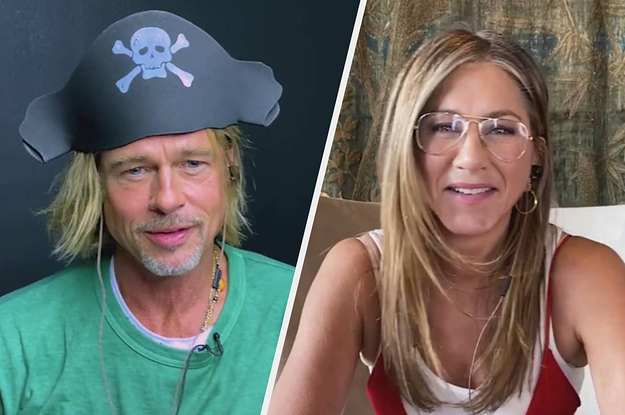 “Hi Brad, you know how cute I always thought you were.”

Even though they’ve now been divorced for 15 years, Brad Pitt and Jennifer Aniston are still incredibly chill. Their recent participation in a Fast Times at Ridgemont High table read wouldn’t have been possible were that not the case.

That’s because Brad and Jen ended up taking on one of the most, um, awkward — and memorable — scenes in the film: The one where Linda Barrett, played by Phoebe Cates, walks in on Brad Hamilton (Judge Reinhold), imagining her topless and more.

For the Fast Times table read, which was held to raise funds for coronavirus pandemic relief — led by the nonprofits CORE and REFORM Alliance — Jennifer played Linda and Brad played… you guessed it.

He introduced himself: “Brad will be reading the character of Brad.” And, wow, did he come prepared with props and all.

And Jen’s delivery was just so good when she said the lines, “Hi Brad, you know how cute I always thought you were. I think you’re so sexy. Will you come to me?”

It was definitely a moment.

Of course, Brad and Jen weren’t the only actors in attendance — the cast for the table read had a lot of really familiar faces.

The table read wasn’t the whole script, but instead some “classic scenes” — like the one Brad and Jen did.

While Brad and Jen’s exchange was definitely the evening’s climax (sorry), Shia LaBeouf deserves some kind of award for his performance.

Brad was really in awe of Shia’s Spicoli.

No one has ever been this committed to a table read before.

See for yourself and watch the whole thing here.