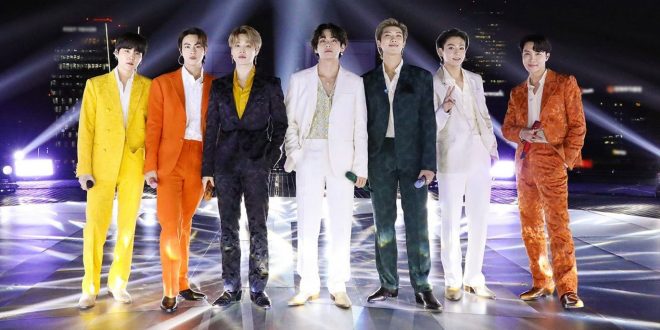 Break Out The Lightsticks: BTS Is Bringing Back Bang Bang Con

Earlier this year, in April 2020, BTS were at a crossroads. With a world tour delayed due to the coronavirus pandemic, the seven members were galvanized to find new ways to create memories and connect with fans online and at a safe distance, rather than in person. Enter Bang Bang Con, a free, weekend-long livestreamed event filled with a plethora of exciting BTS content sure to bring the thrill and comfort of live shows to fans virtually. And on Monday (April 12), BTS announced they’ll be back for round two.

The second iteration of Bang Bang Con will take place on April 17. Titled Bang Bang Con 21, the day-long festivities will be held on the group’s BangtanTV YouTube channel starting at 3 p.m. KST, or 2 a.m. EST. It will feature three previously recorded fan meetings and concerts that fans across the globe will be able to watch for free.

The livestream’s setlist kicks off with BTS Live Trilogy Ep. 1 BTS Begins (Memories of 2015), the group’s first concerts held in Seoul back in 2015 after the release of their fan-favorite mini-albums O!RUL8,2? and Skool Luv Affair. Then the party moves from Seoul to Busan, Jimin and Jungkook’s hometown, with BTS’s 5th Muster [Magic Shop], the group’s multi-day fan club event that was originally held back in June 2019. It all culminates with a high-energy concert from the group’s Love Yourself: Speak Yourself tour that was held in São Paulo in May 2019.

Over 50.6 million fans tuned in to watch Bang Bang Con last year, with 2.24 million concurrent viewers streaming the event simultaneously and proudly waving their lightsticks in over 162 different regions. In June of the same year, BTS held Bang Bang Con: The Live, their first online concert that garnered 756,000 paid viewers from over 107 regions around the world.

The event announcement comes on the heels of a roster of accolades for the superstar South Korean band: BTS made headlines last week as the group broke multiple chart records with their single “Dynamite” and received three nominations at the iHeartRadio awards including Best Duo/Group of the Year, Best Fan Army, and Best Music Video.