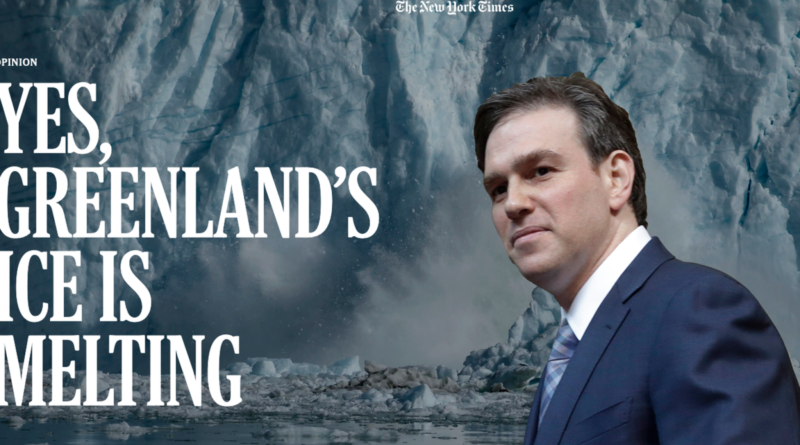 Bret Stephens, the New York Times columnist with a long history of bad conservative takes—the same man who decided to quit Twitter after he threw a fit over being called a bedbug—says he’s changed. In an essay for the Times opinion section published Friday, Stephens claims that a visit to Greenland changed his mind on climate change, but the uniquely infuriating essay is still full of Stephens-style bullshit, horrible design choices from the Times, and bad faith arguments on climate. Not much has changed, it seems.

I understand, roughly, the appeal of this pitch on a big scale. Stephens has long been publicly labeled in certain climate circles as a climate denier for his professed skepticism around certain aspects of science. (Since he doesn’t necessarily deny climate science as a whole, I prefer the term used by David Roberts, formerly of Vox, for Stephens: “climate change bullshitter.”) The jist of the new essay is that after making a series of hardline denier statements in the late 2000s and mid 2010s, and after years of choosing to not listen to climate scientists who call him out on his mishandling and questioning of science, he was invited to visit Greenland to see the impacts of climate change firsthand. The drama of the melting glacier seems to have done its work: by the end of the piece, Stephens assures the reader he has “newfound concerns about climate change.” That transformation, however, does not happen in a vacuum—and I question whether it was a real transformation at all.

Despite being billed as a redemptive arc for Stephens’s former skepticism, the piece is filled with typical Stephens-style bad faith arguments that make it clear he is still not prepared to listen to experts on climate. It’s very clear from this piece that he is not all that concerned about what science is telling us about the worst-case scenarios, and is mostly focused on fighting the specific brand of leftist climate alarmists he—and many conservative thinkers—have decided are real, and more of a threat than warming temperatures themselves.

After acknowledging the reality of warming and the disaster befalling the glacier, Stephens spends much of the piece decrying government solutions as ineffective, too radical, unpopular and not necessary. Instead, he tells us, the markets must handle the changes we need. Along the way, he provides a lot of whataboutisms and flawed presentations of climate science that seem specifically designed to drive anyone who has been working on climate insane.

One obvious bad faith segment that caught my eye: Stephens quotes Steve Koonin, a former Obama administration official turned climate denier favorite talking head, on Greenland’s melt. Koonin, Stephens writes, “thinks the risks associated with Greenland’s melting are less a product of human-induced global warming than of natural cycles in North Atlantic currents and temperatures, which over time have a way of regressing to the mean.” This claim of Koonin’s has been debunked multiple times by scientists; there is no note in the piece explaining that the claim is false. (We asked the Times if this passage was fact-checked or if the paper considered adding a caveat explaining that this is scientifically inaccurate; a spokesperson told us that it “was only introduced in order to dispute it, not quote it as a persuasive source,” as Stephens writes that he is “less sure” about claims like Koonin’s since visiting Greenland. We asked the Times to clarify if there was ever a discussion about specifically citing Koonin’s claims as false in the piece; the spokesman said they had no further response.)

One of the most intensely ironic elements of the piece is that Stephens goes an entire essay without mentioning the powerful monied forces in the U.S. that have kept climate action from becoming effective. Stephens is all too eager to critique government-led responses to climate change, but he fails to address how in the U.S., at least, a carbon tax—one of the most basic climate policies out there—was rejected by President Obama after a previous effort to get a tax in place failed miserably thanks to Republican control of Congress. (It’s ironic that Stephens is writing this piece following the passage of the first national climate bill the U.S. has ever passed, and yet the Inflation Reduction Act gets no mention whatsoever.)

It would be one thing if Bret published this essay in a newsletter or a blog post. It would fit well with his old employers at the Wall Street Journal’s Opinion page (although any acknowledgement that climate science has merit and that there are things to be concerned about may be too liberal for even them). But Bret is on staff at the New York Times, which seems determined to counter the really excellent work many of its other staff produce on climate in an ill-advised effort to appear bipartisan. Stephens has long excelled in the kind of whataboutism that the Times has demonstrated it is not prepared to fact-check or edit, and this piece unfortunately illustrates that too well.

The design of this piece—and the money and resources that clearly went into it—is, frankly, pretty embarrassing. From the jump, the images and design of the layout serve to reinforce the bad-faith statements Stephens makes. “Yes, Greenland’s ice is melting…” the headline reads on first load of the page; as the user scrolls, a “BUT…” appears, like a horrible textual representation of a Mr. Gotcha. The piece continues with a series of these, like a nonsensical book of Mad Libs:

“Yes, Greenland’s ice is melting… but we need to accept economic growth as a benefit.”

“Yes, Greenland’s ice is melting… but we need solutions that ally with human nature.”

Never mind that the impacts of climate change have little to do with some of the statements made here, or that many policy solutions on the table that Stephens might turn his nose up at do tackle these ideas. The graphics seem to suggest that we’re worrying too much about all of this, and are at danger of veering into horrific alarmism.

I sent the New York Times a slew of questions about the piece, including whether or not the paper paid for Stephens’ trip, the cost of said trip and the resources around it, and what fact-checking processes were involved and whether or not any climate scientists were involved in said fact-check. In response, a spokesperson sent over the following statement:

“The Times is strongly committed to deep, probing and on-the-ground reporting on the world’s most urgent and newsworthy topics. Bret’s reporting for this piece was no different. And as with all publications at The Times, whether from newsroom or opinion writers, this piece was thoroughly fact-checked.

At Times Opinion, we believe evolution of views is not just possible, but part of a good-faith and curious engagement with the world. Bret’s reporting for this piece was thorough, and acknowledges his informed journey from previous perspectives on climate change, which are both cited within his piece and linked for context.”

Because this is an opinion piece, Stephens ends with a list of recommendations for how he thinks we should address climate change, ranging from “engage with critics” to “be humble about the nature of solutions.” It’s rich that he thinks he should have a seat at the climate table when he has categorically refused to engage with this issue in any critical and meaningful way for years, or to listen to scientists telling him he’s not correctly interpreting the science.

Maybe I’m just a bozo who spent part of their week photoshopping sexy solar panel Halloween costumes, and not a Big Enormous Brain like Bret, who seems confident that his advice is the best that climate activists, scientists and policy makers have never before considered. If folks want to think that, that’s fine.

But many of the things that Stephens is writing about aren’t news to climate activists. Even the most concerned are able to acknowledge the enormous complexities and difficulties on the road ahead. Even the most dedicated activists are able to parse out complex issues, like sourcing minerals for renewable technologies or ensuring developing nations have access to energy. Climate activists are not demanding a wholescale rethinking of our energy systems because it sounds fun or cool—but rather because the science does demand that we think about the worst-case scenario, which is truly monstrous.

Being alarmed about climate does not equate to being unreasonable about the challenges ahead, as Stephens seems constantly determined to depict climate activists. It does, however, mean taking the science seriously and considering what is needed to avoid worst-case scenarios—and it’s difficult to make the case that the free market alone will be enough.

Despite the monied interests blocking progress, there are intelligent, meaningful conversations happening about climate policy, and there have been since Bret Stephens was yammering on about climate change being a “mass hysteria phenomenon.” It’s a shame that he still is choosing not to listen.

Update 10-28-22 6:04 P.M. EST: This piece has been updated with additional information from the New York Times PR department on the decision to not mark Steve Koonin’s claims as explicitly false.