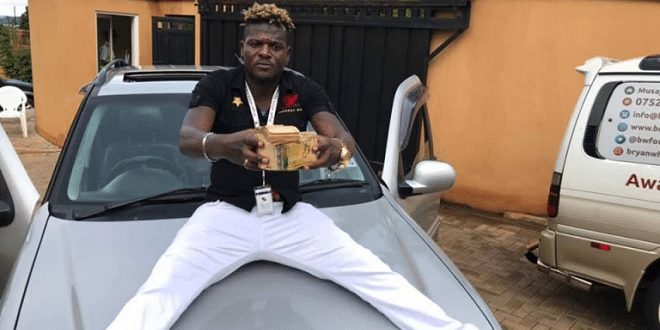 Failed singer Dj Michael was apparently kicked off the podium for allegedly stealing a total of about 50 Million UGX.

Sources have told EJazzug.com that the Muko Muko hit-maker embezzled the 50 M from the podium an act that was later learnt about by the podium boss. It was at this time that Brian White chose to indefinitely suspend the lad.

Our efforts to talk to Brian White about this exact case went futile, however, Dj Micheal revealed to us that he is not sure about why he was suspended but he is sure it is not about the money.

Michael says it might just be because of misconduct, he however promised to get to his knees before the money-bag and request for forgiveness.

This comes shortly after Brian White spent some good money in Arua. According to the money bag, he spent a whooping 7 Bn, something that several people have come to doubt.

Also Read: A Pass Tells Haters To Join Weasel In Carrying Posho And Beans At The “Podium”.