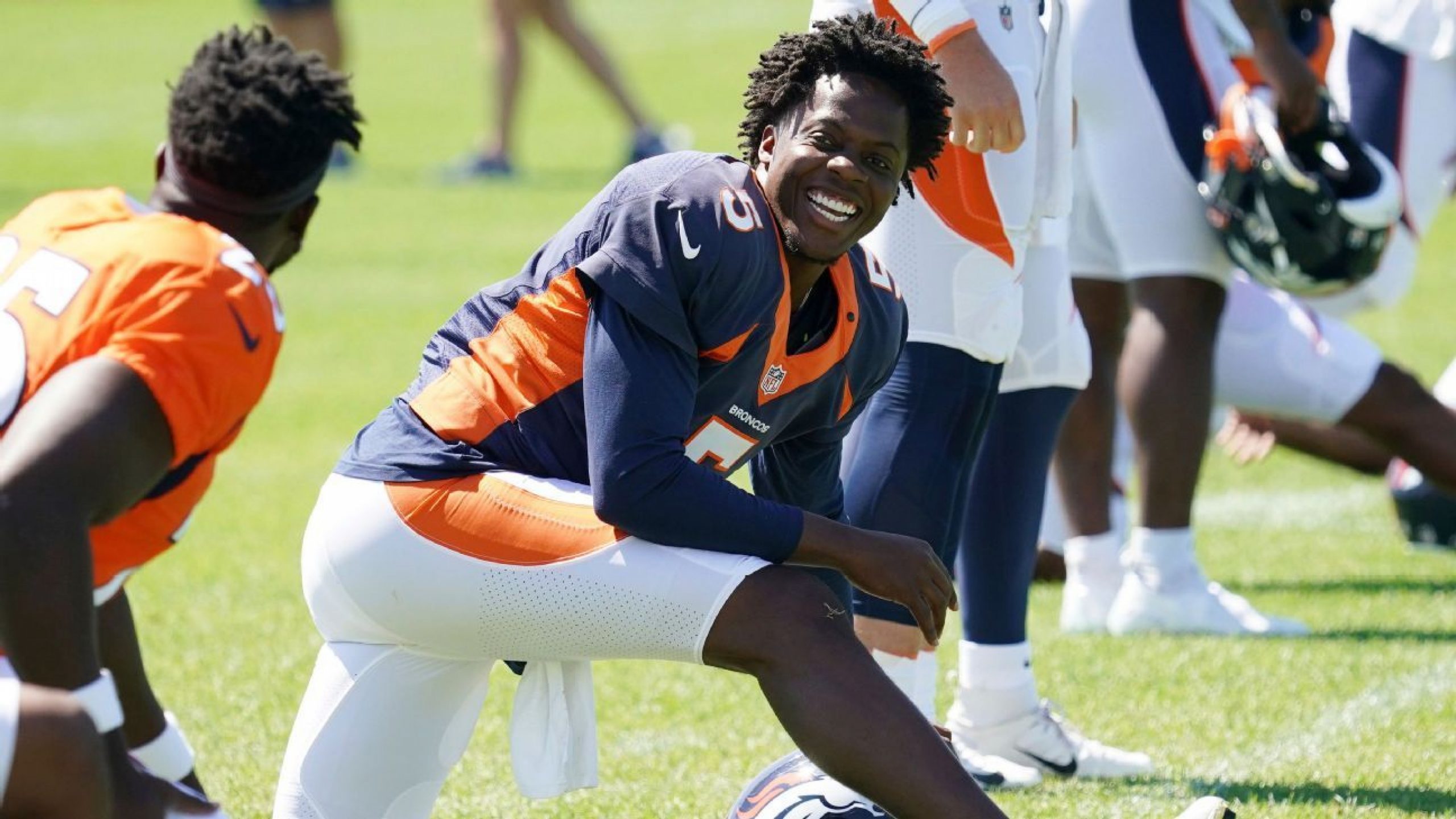 EAGAN, Minn. — The impact of Teddy Bridgewater’s smile, his willingness to keep trying to stay in football after a devastating knee injury and his attitude about it all could be seen in the collection of No. 5 Minnesota Vikings jerseys in the crowd Wednesday at the Vikings’ suburban Minneapolis complex.

Bridgewater, in the throes of a quarterback completion with the Denver Broncos these days, hasn’t played in a game for the Vikings since 2017. In the last two of his four seasons with the team he wasn’t the starter, but rather a player trying to see if he could get back on the field again.

Yet, there were young and old mingling in the stands, wearing the memento, a little “remember when” of his time with the team.

“Feeling real emotional coming out of the weight room, just did like 5,000 crunches, man,” Bridgewater joked after a post-practice workout. “No, it’s great being back here. … It was cool to see. I saw a couple small children wearing No. 5 jerseys, and it was pretty cool to see.”

The Broncos and Vikings will have the second of two joint practices Thursday, leading up to Saturday night’s preseason opener for both teams. But the week has a little more emotional tug for Bridgewater than maybe even he had expected.

Coming off a Pro Bowl season as the Vikings’ 23-year-old starting quarterback in 2015, he moved through training camp in 2016 lugging plenty of lofty expectations from the team’s 11-5 finish the year before. But on Aug. 20, 2016, in a largely non-contact practice, Bridgewater suffered a torn ACL and a dislocated left knee.

His surgeon, Dan Cooper, the Dallas Cowboys’ team physician, had publicly called it a “horribly grotesque injury” that was like a “war wound.” Over the next two years, Bridgewater would play in one game for a total of nine snaps.

“I’ve found myself thinking about it more lately than I have in the past,” Bridgewater said Wednesday. “Just about the day I was injured and up until this point. Because I use it as motivation now. Before I used to just brush it off like, man, it happened, keep going. Now it’s just like, man, here I am where I could have been counted out. I almost had to have my leg amputated and things like that, and it’s like when I wake up in the morning I’m blessed. I get an opportunity to put my feet on the ground and go out here and play football, a game that I love to play. So I have so much fun playing this game now, more fun than I ever have, the more that I think what I went through here.”

The Broncos traded for Bridgewater the day before April’s draft opened because first-year general manager George Paton, who spent 14 years with the Vikings, including Bridgewater’s four years with the team, believed acquiring him was a win-win situation: that Bridgewater would be good enough for the Broncos to win games with if he won the job, but also a player team-oriented enough to help Drew Lock along the way if he didn’t.

He added: “He’s always willing to help, always got a smile on his face. … He’s just a fun, energetic guy to be around.”

Bridgewater had said last week he didn’t believe he would feel all that emotional about a return to Minnesota when the Broncos would arrive to practice as well as a preseason game. But that was a little different Wednesday.

After hearing some cheers and seeing some of the younger fans, wearing his jersey from a former football life, waving, trying to catch his eye, Bridgewater said it made him think of how he had changed from the player — and person — he was before the injury to now as he tries to win the starting job with the Broncos.

“Biggest takeaway from my spots is, I learned that I’m a survivor,” Bridgewater said. “No matter the circumstance, no matter the situation, how are you gonna survive? You can lay down and be eaten alive or survive and keep hunting. That’s been my mindset.”

He added: “[Vikings fans] welcomed a boy who became a man, and they were so genuine here and I appreciate that, still to this day. Think that’s all it is, the people here, Minnesota nice, I just appreciate the support I still get.”