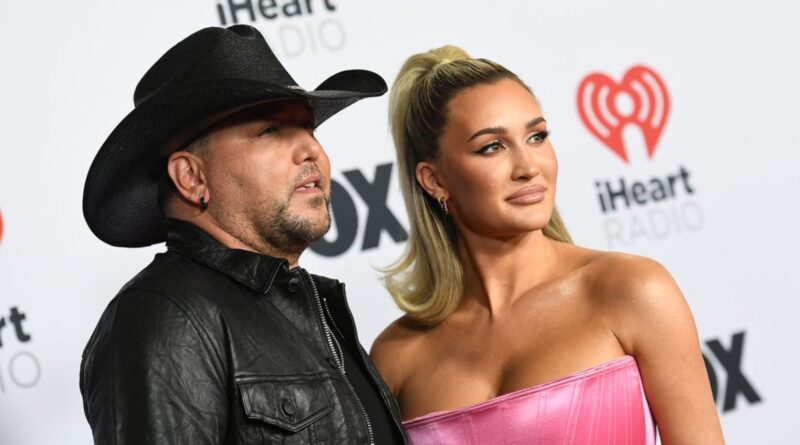 Jason Aldean and Brittany Kerr attend the 2022 iHeartRadio Music Awards at The Shrine Auditorium in Los Angeles on March 22, 2022.

Brittany Aldean got into a heated feud with country stars Maren Morris and Cassadee Pope over the weekend, after the wife of Jason Aldean posted a transphobic joke on Instagram.

Following the backlash, Brittany took to Instagram on Wednesday (Aug. 31) to share her new merch, which features the words “Don’t tread on our kids” in the classic Barbie font. Billboard has reached out to Mattel for comment on the font. “Per usual, my words have been taken out of context over the last week,” she captioned the post. “Instead of getting twisted about the twisting of my words, I’ve chosen to bring some good out of it. Introducing our NEW Barbie inspired line LIVE  **Through this launch we will be giving back to and supporting @operationlightshine in effort to help fight child exploitation and human trafficking.”

On August 23, Brittany came under fire for a makeup video she posted with the caption, “I’d really like to thank my parents for not changing my gender when I went through my tomboy phase. I love this girly life.”

In a wordier statement via Instagram Stories on Friday (Aug. 26), Brittany expanded upon her thoughts on transgender youth and their rights to gender-affirming care: “Advocating for the genital mutilation of children under the disguise of love and calling it ‘gender affirming care’ is one of the worst evils. I will always support my children and do what I can to protect their innocence,” she wrote. “The other day Memphis wanted to be a dinosaur and tomorrow Navy will want to be a cat. They’re children. Some parents want to be accepted by society so badly that they’re willing to make life-altering decisions for their children who aren’t old enough to fully comprehend the consequences of those actions. Love is protecting your child until they are mature enough as an adult to make their own life decisions. Thankful my parents allowed me to go through my tom boy phase without changing my gender.”

In response to the transphobic comments, Cassadee Pope wrote on Twitter, “You’d think celebs with beauty brands would see the positives in including LGBTQ+ people in their messaging. But instead here we are, hearing someone compare their ‘tomboy phase’ to someone wanting to transition. Real nice.”

Maren Morris replied to Pope’s tweet in agreement, writing, “It’s so easy to, like, not be a scumbag human? Sell your clip-ins and zip it, Insurrection Barbie.”

It’s so easy to, like, not be a scumbag human? Sell your clip-ins and zip it, Insurrection Barbie.

On Instagram, Morris continued to talk about Brittany Aldean with Pope: “You know, I’m glad she didn’t become a boy either because we really don’t need another a–hole dude in the world. Sucks when Karens try to hide their homophobia/transphobia behind their ‘protectiveness of the children.’ Weren’t they putting their kids in ‘Biden-is-a-pedo’ shirts on social media? Sounds like a real safe way to protect them from millions of eyes! F— all the way off to Insurrection Barbie and the fellow IB’s trolling this comment section with their hypocritical, hateful a–es.”

Transgender is a term for anyone whose gender does not align with their sex assigned at birth. Gender identity is also not the same thing as gender expression, i.e. being a “tomboy.” According to the Human Rights Campaign, which offers information and advocacy for the LGBTQ+ community, “At some point, nearly all children will engage in behavior associated with different genders – girls will play with trucks, boys will play with dolls, girls will hate wearing dresses and boys will insist on wearing them – and gender nonconforming behavior does not necessarily mean that a child is transgender. That said, sometimes these behaviors can clue us in to what a child may be feeling about their gender – with some children identifying as another gender than the one they were assigned by the time they are toddlers.”

HRC adds, “The general rule for determining whether a child is transgender or non-binary (rather than gender nonconforming or gender variant) is if the child is consistent, insistent, and persistent about their transgender identity.”

Pre-pubertal transgender children can often begin a social transition, changing one’s name and pronouns, or wearing a style that aligns best with their identity. Legal changes to names and genders listed in identifying documents are also possible. Transgender children are not offered puberty blockers or hormone treatments until they reach puberty, and medical guidelines generally do not recommend genital gender-affirming surgeries before a child reaches age 18.