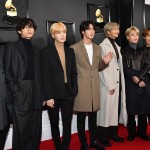 Let’s take a look at the five nominees for best international group — including their nomination history in this category and how they have fared on the U.K. charts since the current eligibility year began on Dec. 13, 2019. (The eligibility year ended on March 11, 2021.)

BTS: The lads landed their second No. 1 album with Map of the Soul – 7 and they just missed out on landing a third when Be peaked at No. 2. They also secured their first two top 10 singles: “Dynamite” (No. 3) and “Life Goes On” (No. 10). BTS would become the first act that doesn’t hail from Europe, North America or Australia to win for best international group.

Fontaines D.C.: The band’s sophomore album, A Hero’s Death, became its second top 10 album, peaking at No. 2. This is Fontaines D.C.’s first nod in this category. The band’s 2019 debut album, Dogrel, was nominated for the Mercury Award. Of note: The Irish band has two Conors among its five members.

Foo Fighters: The band landed its fifth No. 1 album with Medicine at Midnight. The album climbed higher in the U.K. than it did in the band’s home country, where it peaked at No. 3 on the Billboard 200. (The Foos have also tallied more No. 1 albums in the U.K. than in the U.S.: five vs. two here.) The six-man band is second only to U2 both in number of nominations in this category (seven) and in number of wins (four).

Haim: The sister trio’s third studio album, Women in Music Pt. III, became its second No. 1 album. Again, it charted higher in the U.K. than it did on the Billboard 200 (No. 13). The band also landed its second top 20 single as featured artists on pal Taylor Swift’s “No Body, No Crime” (No. 19). This is Haim’s third nomination in this category. Note: If Haim wins, they will become the fourth all-female group to win in this category, following The Bangles (1987), TLC (2000) and Destiny’s Child (2002). If Haim loses, they will join Black Eyed Peas as the only groups with as many as three nominations in the category without a win.

Run the Jewels: The acclaimed hip-hop duo, consisting of El-P and Killer Mike, landed their first top 10 album when fourth studio album, RTJ4, peaked at No. 9. (It reached No. 10 on the Billboard 200.) Run the Jewels have toured as a supporting act to headliners ranging from Lorde to Rage Against the Machine. This is the duo’s first nod in this category. Five R&B or hip-hop groups have won in this category: Fugees, TLC, Destiny’s Child, A Tribe Called Quest and The Carters.