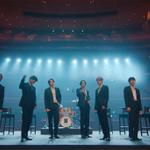 It would be great if MusiCares opened its vaults again so that ordinary music fans for whom a $1,000 ticket is simply out of reach can see some of these classic performance clips.

Traditionally, the Friday night before the Grammys is reserved for the MusiCares Person of the Year gala, an annual salute to an artist selected not only for their musical achievement, but for their philanthropic contributions. This year, COVID-19 prohibited people gathering in person so Friday night (March 12), MusiCares’ parent, the Recording Academy, pivoted to a 90-minute virtual celebration dubbed Music on a Mission.

MusiCares, which provides financial and medical assistance to members of the music community, opened up the evening to the public with tickets priced at an affordable $25. Usually capped at 2,000 people at the LA Convention Center and with tickets starting at more than $1,000, this year’s event drew more than 18,000 people online.

Below are six of the best moments from the event:

BTS Brings the Sizzle: The globe-conquering pop group supplied a video of them performing their letter-perfect pop smash “Dynamite.” The group received its first Grammy nomination this year for the exciting single, its first No. 1 hit on the Billboard Hot 100. We’ve all seen BTS perform the song on many awards shows, but it never gets old. You can chalk that up to three things: The song is extremely well-constructed, the group members move and dance as well as any boy band in history, and the production values of their videos are top-notch.

Two Rock Pros Revive a Classic: Tom Petty and Stevie Nicks performed a great version of their 1981 classic “Stop Draggin’ My Heart Around” at the 2017 event honoring Petty. The clip is especially poignant when you remember that Petty died unexpectedly less than eight months later, on Oct. 2, 2017.

Gaga Just Needs Her Voice: By now, everyone knows that Lady Gaga is a great singer, quite apart from the theatrics, but one of the first times she really proved that point was at the 2014 Person of the Year gala honoring Carole King. Gaga sang a powerful and poignant version of King’s 1971 classic “You’ve Got a Friend” that was simply Gaga at a piano in the center of a packed LA Convention Center. Everyone left the room saying the same thing: “She’s got it.”

JoBros Cover Aerosmith (!): The pop trio was surprisingly effective on its cover of Aerosmith’s 1994 hit “Crazy,” drawn from the 2020 MusiCares gala. The brothers were back on top thanks to their 2019 smash “Sucker.” That may have given them the extra boost of confidence they needed to highlight the rock side of their musical personality — right in front of the songs’ creators.

Usher salutes Lionel Richie: One of the best aspects of the Person of the Year galas is seeing current stars pay tribute to artists who have influenced them. Usher performed the Commodores’ exuberant 1981 hit “Lady (You Bring Me Up)” in tribute to Lionel Richie, the 2016 honoree. The song worked equally well for Usher as it had for Richie’s old group.

H.E.R. Brings Us Up to Date: The clips from past Person of the Year galas were probably new to most people who tuned in, thrilled to finally be able to see Paul McCartney sing The Beatles’ “Sgt. Pepper’s Lonely Hearts Club Band” in 2012 or Springsteen & the E Street Band tear through “Born to Run” in 2013. Still, it was good that the producers didn’t just make this a clip show and took the initiative to get five new performances. One of the best was H.E.R.’s performance of “Fight for You,” her Golden Globe-nominated and Oscar-shortlisted song from Judas and the Black Messiah. The song may very well receive an Oscar nomination on Monday, the morning after the Grammys.

In addition, eight artists spoke of the good work that MusiCares has done and urged viewers to donate. These were King, Richie, Ledisi, Macklemore, Fleetwood Mac, Ringo Starr, Shakira and Jesse & Joy. These pitches gave the event the feel of a telethon, but there’s nothing wrong with that.

The event opened with a pre-show set from DJ D-Nice, whose Instagram sessions were one of the early pandemic sensations to go viral as the world locked down.

It would be great if MusiCares opened its vaults again so that ordinary music fans for whom a $1,000 ticket is simply out of reach can see some of these classic performance clips. If they do it again, let’s hope they do away with the “Coming Up Next” chyrons. TV networks love those things to keep viewers tuned in, but people here had bought a ticket and were not likely to drift away. And it’s disrespectful to the artist on the screen at that time that the chryon appears to suggest that we might. That’s a quibble, but one the producers might do well to consider.