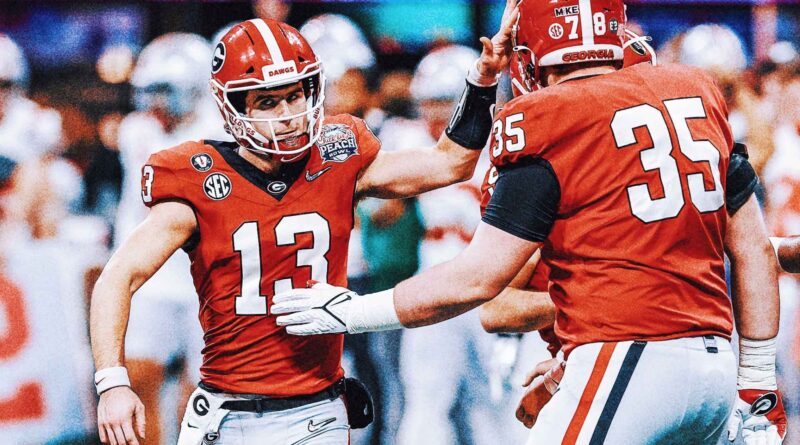 ATLANTA — This wasn’t the way Ohio State hoped to ring in the New Year.

At the stroke of midnight, kicker Noah Ruggles missed a potential game-winning 50-yard field goal that would have sent the Buckeyes to the national championship game. Instead, Georgia escaped with a 42-41 victory and now officially gets to defend its title against TCU on Jan. 9 at SoFi Stadium in Los Angeles.

Here are three quick thoughts on an epic Peach Bowl:

Georgia will play for another national championship

The narrative surrounding Georgia heading into the CFP was that, if it won a second consecutive title, this would signal a changing of the guard in the sport.

Kirby Smart built Georgia in his image, an identity he developed and honed while working as an assistant and winning titles with Nick Saban at Alabama. This Bulldogs team is consistently one that’s physically imposing and stingy on defense with a must-win attitude that annually puts players into the NFL. Just like the Crimson Tide.

The Bulldogs beat the Tide to win it all last year, and are trying to become the first program to win back-to-back titles since Saban did it with Bama in 2011 and 2012. Winning two national championships in a row is an incredibly rare feat. And Ohio State nearly made sure that didn’t happen.

There have only been six teams to ever repeat as outright national champions since the AP Poll began in 1936. Now, Georgia could be the seventh as it prepares to face the Horned Frogs.

Is Ohio State at a crossroads?

For the past five weeks, ever since Ohio State lost to Michigan for the second straight time, the program has had to answer all kinds of questions about The Game. Even this week in Atlanta, Day and his players were asked questions about the Wolverines.

What were those days and weeks like after the loss? How tough was it to gear up for this semifinal matchup against Georgia after that Michigan loss? How would you feel about playing Michigan in the national championship?

Ohio State’s response in this game would be telling. Would this team show up still defeated or more motivated? Day said he felt his team had an edge at practice this week. Was that for real or just coach speak?

Turns out it was for real. The Buckeyes were the more dominant side all night and nearly pulled off a massive upset in the final minutes.

It certainly felt like they were going to put an end — albeit probably just briefly — to any further Michigan line of questioning. Sure, they hadn’t beaten their archrival in two years, but they were going to have an opportunity to rule over all of college football, not just the Big Ten. Would that have been enough to swing the balance of power of the conference back in their favor?

The Ohio State quarterback was asked a lot about legacy earlier in the week. Did he need to beat Michigan to cement himself as one of the best quarterbacks in program history — even though he already is? Let’s remember that heading into the CFP semifinal, Stroud was a two-time Big Ten offensive player of the year and Heisman Trophy finalist, and had thrown for 7,775 yards and 81 touchdowns, good enough to be second on the Buckeyes’ all-time leader list behind former quarterback J.T. Barrett.

In the loss to Georgia, he went 23-for-34 for 348 yards and four touchdowns without any interceptions, though he was sacked four times.

Stroud was excellent against one of the best defenses in the country. He was surgical, picking on a secondary led by cornerback Kelee Ringo, and mostly evading a defensive front that featured star defensive tackle Jalen Carter.

He even had a chance to lead Ohio State to victory in the final minute. After Georgia took a one-point lead with 54 seconds left, the game was in Stroud’s hands. He made smart plays, like a 27-yard scramble to the UGA 31-yard line. And he threw the ball away on third down when Georgia put on an all-out blitz, setting up the field goal attempt.

Stroud has been criticized for the last two years and has taken it all in stride. He maturely took responsibility for the Michigan loss, even though Day assured him it did not fall on him. His performance against Georgia on Saturday night was certainly worthy enough to send his team to the national championship game. The Buckeyes just fell short.