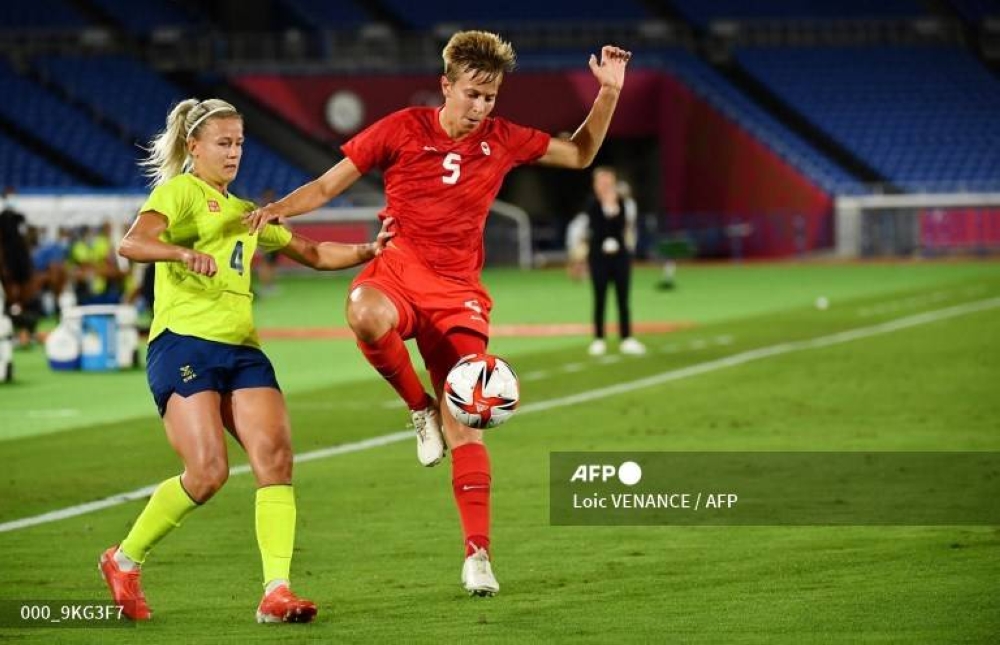 Canada’s midfielder Quinn (R) fights for the ball with Sweden’s defender Hanna Glas during the Tokyo 2020 Olympic Games women’s final football match between Sweden and Canada at the International Stadium Yokohama in Yokohama, on August 6, 2021. (Photo by Loic VENANCE / AFP)

Canadian footballer Quinn became the first openly transgender athlete to win an Olympic medal on Friday in another trailblazing moment at the Tokyo Games for the marginalised community.

Quinn — who goes by a single name and uses the pronouns “they” and “their” — started the gold-medal match against Sweden, which was won by Canada following a dramatic penalty shootout.

The 25-year-old has a long history with the Canadian team, debuting in 2014 and winning bronze at the 2016 Rio Games, but only came out as transgender last year.

“I wanted to be my authentic self in all spheres of my life and one of those is being in a public space,” Quinn said at the time.

“So that was one of the reasons behind it, because I was tired of being misgendered and everything like that.”

The player’s pioneering status at the Tokyo Games has until now largely been overshadowed by the presence of transgender New Zealand weightlifter Laurel Hubbard.

Hubbard, whom the International Olympic Committee acknowledges became the first openly trans woman to compete at the Olympics on Monday — set off a firestorm of debate over her appearance.

Critics argued the New Zealander had physical advantages locked into her body from her developmental years as a male, making it unfair for her to compete against female-born lifters.

However, Hubbard’s Games debut proved anti-climactic in a sporting sense when she failed to complete a lift.

The 43-year-old, who was twice the age of some of her rivals and had not competed internationally since before the coronavirus pandemic, later admitted she was “overwhelmed” to be in the spotlight.

There are no questions about Quinn’s sporting prowess — the player is entering the prime years for a defensive midfielder and lines up at club level alongside top women’s stars such as US star Megan Rapinoe.

Quinn, who plays with the Seattle-based OL Reign in the US National Women’s Soccer League, has also not faced questions about their presence on the Canadian women’s team.

Athletes who transition from female do not attract the same scrutiny because they are not considered to have the inherent physical advantages of those born male.

“I am considered maybe one of the most digestible versions of what it means to be trans,” the player told the club website.

“I’m white, I’m trans-masculine. I want my story to be told because when we have lots of trans visibility that’s where we start making a movement and start making gains in society.”

Like Hubbard, Quinn has spoken about the struggles of being transgender in a binary-focused world and being a role model at the Games for young people experiencing similar challenges.

“Athletics is the most exciting part of my life…. If I can allow kids to play the sports they love, that’s my legacy and that’s what I’m here for.”

After arriving in Tokyo, Quinn reflected on what it meant to appear on sport’s biggest stage as an openly trans athlete.

“I don’t know how to feel. I feel proud seeing ‘Quinn’ up on the line-up and on my accreditation. I feel sad knowing there were Olympians before me unable to live their truth because of the world,” the player posted on social media.

The Canadian expressed optimism about the future but said the trans community still faced harsh realities.

“(There’s) trans girls being banned from sports, trans women facing discrimination and bias while trying to pursue their Olympic dreams.

“The fight isn’t close to over… and I’ll celebrate when we’re all here.”